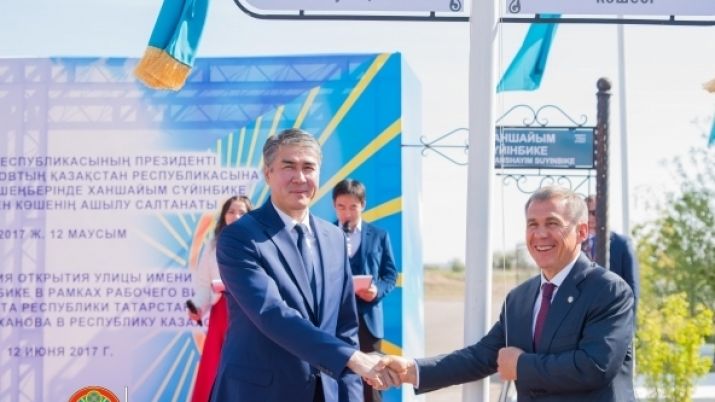 The new street is in cottage town in Family Village and is the second street named after a representative of Tatars in the city. There is also a street named after the Tatar poet, Hero of the Soviet Union, Mussa Jalil in the Saryarka district.

“Today we have become even closer. We are fraternal peoples. The opening of this street is a historical event for us. We have a beautiful street named after Nursultan Nazarbayev in our capital. In that way, each step is the rapprochement of our peoples. We appreciate that and thank Kazakh President (Nursultan Nazarbayev), Asset Issekeshev and everyone who made the decision to open the street named after Queen Sujumbike,” said the President of Tatarstan.

He congratulated all Kazakh citizens on the opening of EXPO 2017 and wished it success.

The soul of the Tatar people is reflected in the image of Queen Sujumbike and the Turkic world as well, according to Minnikhanov.

“We are glad that she became the unifying symbol of Tatarstan and Kazakhstan,” he said.

Issekeshev highlighted that this year marks the 13th anniversary of economic and cultural collaboration between the capitals of the two states, saying, “I hope that today’s event will serve the further development and strengthening of fraternal relations between Astana and Kazan.”

Queen Sujumbike is the national hero of Tatarstan. Her name is associated with the Sujumbike Tower. She was the daughter of Nogai nobleman Yosıf bak and the wife of Kazan khans, as well as served as regent of Kazan during the minority of her son from 1549 until 1551.

Poet and scholar Zhanat Askerbekkyzy and Sharban Beisenova, the winner of Alash international literature prize, honoured worker of culture and member of the Writers Union of Kazakhstan are the initiators of the street opening.

Kazakh Honoured Worker Kamil Mullashev, who is also People’s Artist of Tatarstan, State Prize Laureate of Kazakhstan and Tatarstan, made the Queen’s sculpture, which was presented at the opening ceremony.