ASTANA – Representatives of different sides in the Syrian crisis were joined by Kazakh Foreign Minister Kairat Abdrakhmanov to discuss the ongoing conflict in Syria and the role of the Astana Process during a panel session at the annual Eurasian Media Forum in Kazakhstan’s capital June 24. 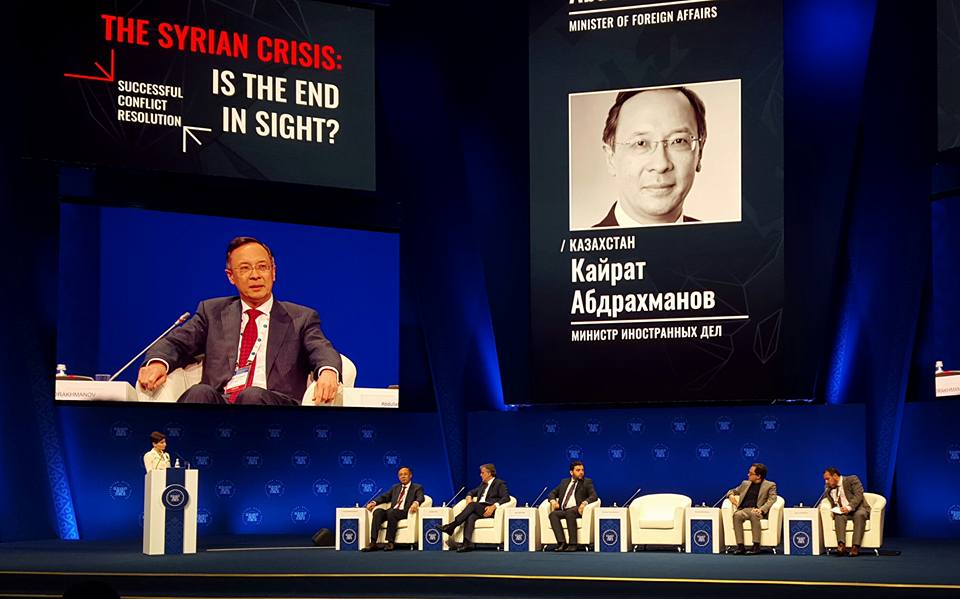 The war in Syria is “a terrible disaster for its people, region and on a global scale,” Abdrakhmanov said in opening the panel, adding that Kazakhstan and its President, Nursultan Nazarbayev, are doing everything they can to help find a peaceful solution.

“The whole process started when two esteemed presidents – Russia’s [Vladimir] Putin and Turkey’s [Recep Tayyip] Erdogan approached President Nazarbayev with the request to consider the possibility of the capital of Kazakhstan, Astana, hosting a meeting between the Syrian government and armed opposition groups, those who joined the renowned ceasefire agreement of 2016,” said Abdrakhmanov, recalling the history of the Astana Process.

Nazarbayev immediately agreed to provide a platform for the meeting under the auspices of three guarantor states.

“We consider the Astana Process to be complementary to the Geneva one. We support the leading role of the United Nations and the special representative of this organisation and its Secretary General to lead the Geneva Process to find a political solution,” he added.

Now is the time to take some real action on ground, said the minister. “The creation of four de-escalation zones in Syria proved to be so far the only viable [action[ leading to the peaceful settlement of the situation in Syria. And I hope very much that all observers including the United States will pay attention to that achievement within the Astana Process. Of course, much depends on the guarantor states,” he said.

Later that day, in a briefing with the media, Abdrakhmanov announced that Kazakhstan and a group of like-minded countries are pursuing a Code of Conduct during Antiterrorist Operations to be adopted at the UN.

Two years ago, in remarks at the UN General Assembly in September 2015, Nazarbayev offered to create a global antiterrorist coalition under the auspices of the United Nations to combat transnational terrorism and extremism. This initiative included the creation of uniform definitions for a number of terms.

“In the case of Syria, you see that, unfortunately, all the terrorist forces have concentrated here, which is really hindering the search for a political settlement to this crisis. In the Code, in addition to trying to determine a common denominator, let’s say, by uniting the efforts of all parties that are really interested in combating international terrorism and extremism, we will also try to make a step towards ensuring that during the antiterrorist operations, all countries rely on one common position. As soon as the UN experts and Security Council members approve the text of this document, it will be presented to the world community,” he stated. 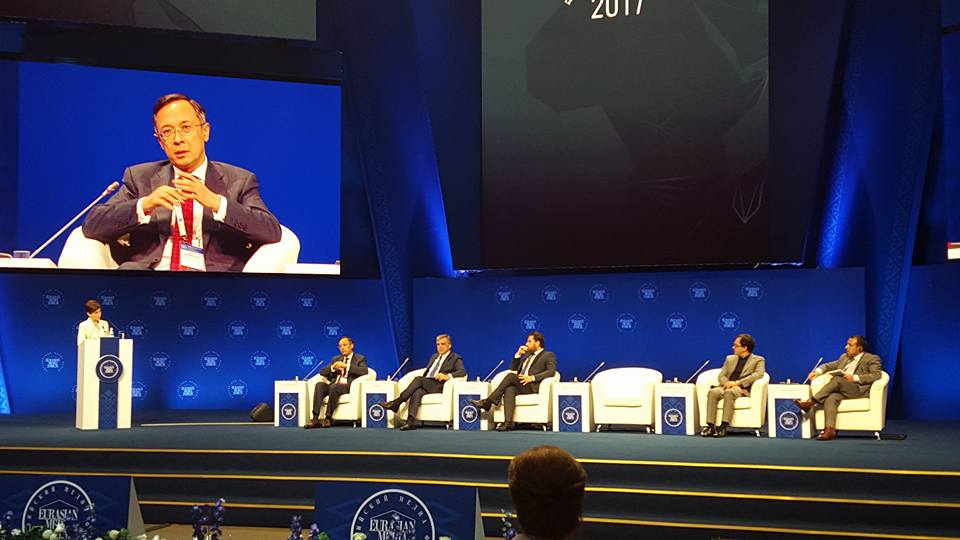 The foreign minister also denied recent press reports about Kazakhstan negotiating to send its troops to Syria. “We are not conducting any official negotiations regarding sending our armed services to Syria,” he said.

Former President of Turkey Abdullah Gül, who also participated in the panel, emphasised that “it is a shame for all of us, for humanity, to see the thousands of killings, millions of refugees and destruction of all the beautiful cities.”

According to him, if conflicts like this are not prevented, it is “inevitable” that power vacuums will be left in the region, “which create radical movements and terrorist groups.”

He added that Kurds and Turks are friends and relatives, brothers and sisters, not enemies to each other, and that it is Turkey’s responsibility, as a neighbour, to contribute to the solution of the conflict. “Neighbours are responsible for creating a secure place for all Syrians, Arabs and Kurds. They should be happy, safe and equal citizens of Syria,” he said.

Director of the Institute for Middle East Strategic Studies Kayhan Barzegar from Iran commented that the way Russia and Iran “are trying to accelerate the political solution is showing how much they would like to manage this crisis.”

Ultimately, the fight in Syria is against terrorism, he said. “Syria might not be connected to Iran by border, but it is to Iraq. It goes to the national security context.”

Iran would accept a collective compromise, Barzegar said. “That is why I think negotiations in Astana are a positive step, because it is focusing on the subject. It is not in the context of traditional geopolitical rivalry between states,” he noted, adding that the main focus should be on the integrity of Syria.

Political representative of Free Syrian Army Salim Hudaifah said the crisis has been complicated by many factors.

“One of them is a conflict of interest between regime friends and opposition friends, especially large, powerful countries, such as the United States, Russia. They all try to achieve their interests around the world, not only in the Middle East. At the same time, there is a conflict of interest between friends of parties, between Iran and Russia, the U.S., Turkey, Saudi Arabia,” he stated.

Talking about the main enemies of the Free Syrian Army at the moment, Hudaifah stressed that both ISIS and the Syrian government forces are their enemies, adding that their army has taken over 5,000 square kilometres.

Journalist from Syria Alaa Ebrahim echoed that the main priority should be combating terror. “The problem, when it comes to the Syrian conflict, is that everyone, including regional, international powers, organisations, say they want a political solution, but at the same time they continue to support and work for a military one,” he said.

According to the journalist, “many organisations and governments want to change the regime in Syria. They send money and weapons and they allow fighters in the country.”

“And now we end up with a situation in which Syria has become a haven for terrorists,” he stated.