ASTANA – Kazakhstan and the World Bank (WB) are celebrating a partnership anniversary this year, for in the last 25 years the financial institution has funded 45 projects totalling $8 billion. Within the June 15-16 Astana Economic Forum (AEF), WB’s Vice President for Europe and Central Asia Cyril Muller gave an exclusive interview to The Astana Times highlighting some of the aspects of cooperation, as well as sharing his view of the country. 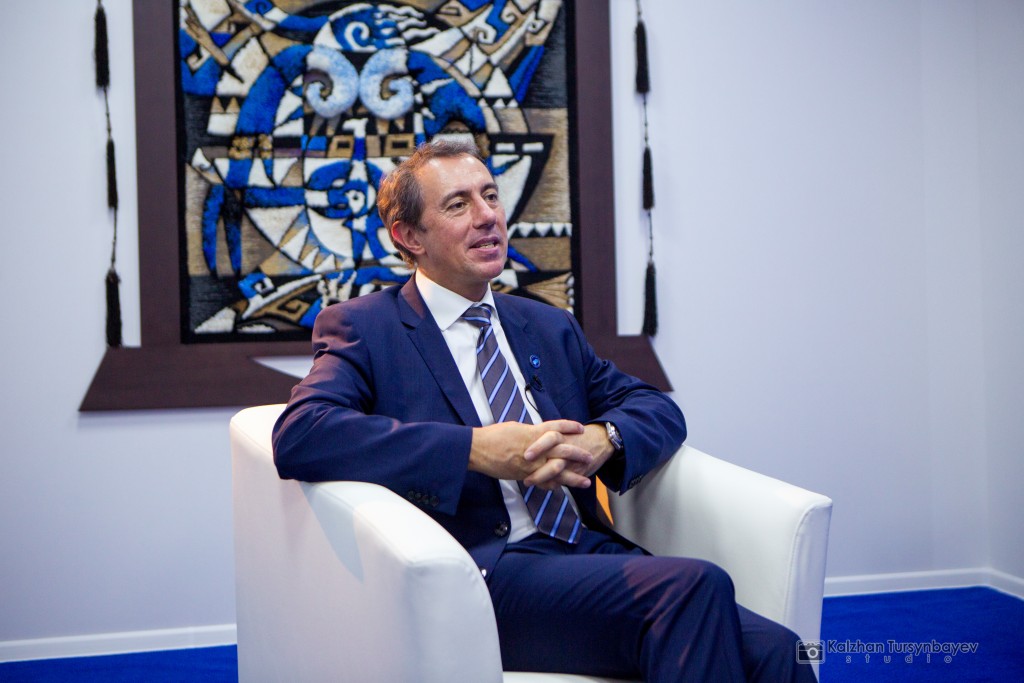 The bank recently announced preparation of a new partnership strategy with Kazakhstan for 2018-2022, although the focus areas have not been finalized. Under consideration are economic management, a stronger role of the private sector in production opportunities of economic integration and connectivity, as well as human capital.

“Because now we are only starting to translate what we presented today [systematic country diagnostic of Kazakhstan, presented at AEF’s session]. It has four areas that we consider constraints, areas that need to be focused on for prosperity in the future. I would expect the four identified areas will become the key drivers of our future programme. That’s what I discussed with Prime Minister [Bakytzhan] Sagintayev and we agreed that, indeed, those areas could form a solid basis for our future programme,” said Muller.

Reviewing the history of the projects, the largest number of loans was provided within the first five years of the partnership, when the WB funded 14 projects worth $1.18 billion. Since 2013, eight projects valued at $1.51 billion have been implemented.

“I think when we look back at the partnership between Kazakhstan and the World Bank, for me what stands out the most is not the individual projects, but more the fact that the World Bank and Kazakhstan became very strong partners and that partnership led to building trust between us. I think the main contribution the World Bank did was to support Kazakhstan in trying to find its own way forward, its own path for development and prosperity,” said Muller.

He recalled the initial period beginning in 1992.

“So, when you look back now it is very impressive. I was a young World Bank staffer in the early 1990s and I was one of the first people to visit Kazakhstan after the fall of the Soviet Union. I do remember how people lived then and how the country had to be invented from nothing. In our partnership, I am most impressed by what the country has achieved. I am happy that we have contributed, but we did small contributions. Overall, that is what I am most impressed by now,” he added.

The WB needed to do two things to assist the new nation.

“One was to help Kazakhstan put in place institutions and policies that help economic growth and help it to be shared with the whole population. The second thing we have done, I think that is important in Kazakhstan, is funding individual projects that make material difference to people,” said Muller, recalling projects such as the Syr Darya River and Northern Aral Sea Control, forest protection and reforestation and southwest roads.

Those loans were good investments, he noted, adding every time he visits he is very pleased by the fact that the country’s infrastructure has improved.

“While we fund physical infrastructure, we also try to build the capacity of people. So, we have done projects in education and health. For instance, one of the projects was to help professionals in the health sector increase and improve their skills. What has been best is Kazakhstan’s ability to develop as a nation and we were able to support that and put in a little bit of support by helping these institutions to develop, then finance some of the key infrastructure and building capital of people,” he said.

Muller also spoke on the issue of reducing the nation’s dependence on natural resources while capitalising in a modern economy on the ability for people to connect and integrate with others.

“When you have a source of wealth like oil or minerals, this will enable you to invest more broadly in making a country stronger over time. Because if you just use these for consumption it is good, you will consume more; but then at the end of the day, the wealth of the nation is about what the nation can really produce over time and how productive people are. So, the question is how you going to move. Use the opportunity of the oil to build a good infrastructure in the country, to improve it, but more importantly making sure the human capital [improves]. Because Kazakh people are very smart and in the future it is the economy that will matter the most – the ability of people to connect and use their capital,” he said.

“I trust in those investments in human capital and if people are given a chance to actually use that capital, then Kazakhstan will grow in the future and be a prosperous nation,” he added.

Talk has been circulating around the fact that many of the investments were used to improve the nation’s transport corridors.

“People think that Kazakhstan will be a big transit country. Yes, maybe it will be a transit country, but that should not be the objective. It should be that this infrastructure means that Kazakhstan is integrated into trade channels, into supply chains that go east, west, north and south. Once we have that, it will be a real sign of success. It means that, for instance, if you have agricultural exports to China, that it can join in immediately in these very well organised corridors for trade and economic activity,” said Muller.

Speaking about the region, he noted the Central Asian counties share a common background and history, but every nation has chosen its own path.

“Kazakhstan from the early days has realised that it needed to be connected to all the countries and it saw itself as a country that wants to play a positive role in the region in linking, for instance, China to Europe, linking Russia, linking South Asia. From the first day, Kazakhstan was the country that was seeing that the world economy is changing and it is changing very quickly and the country needed to be flexible and adaptable,” he added.

Many challenges, however, are shared across the region.