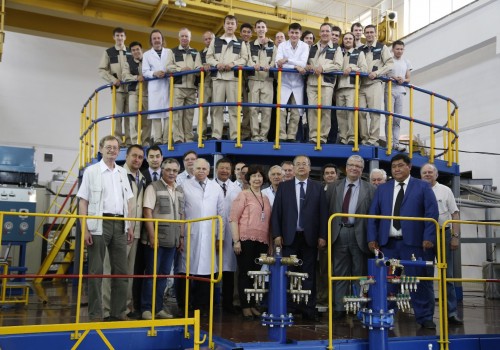 “One of the main issues important for building future thermonuclear reactors has been the creation and testing of structural materials. This problem will be solved with the launch of Kazakh Tokamak for Material Testing,” said General Secretary of the National Nuclear Centre of Kazakhstan Erlan Batyrbekov.

The event took place in Kurchatov in eastern Kazakhstan, the same place where in the 1950s a group of Soviet scientists produced the first tokamaks.

“The Kazakh-made Tokamak will serve as a platform for material testing at heat equal to 20 megawatts per a square metre, which meets the parametres of energy load for future thermonuclear reactors,” Batyrbekov added.

Unlike nuclear fission reactors widespread across the world, nuclear fusion reactors produce energy by fusing atoms. However, it has long been a difficult task for scientists to achieve the generation of energy through nuclear fusion, the same mechanism going on in the Sun, yet hard to achieve at earth conditions.

In accordance with the adopted programme of physical launch of the KTM, the goal of the physical launch phase is to debug and check the working capacity of KTM systems. This stage entails adjustment of the initial phase of the plasma discharge scenario – formation of necessary conditions inside a vacuum camera of KTM with following break-down.

In the meantime, the work is underway, and KTM is scheduled to be commissioned by the end of 2017.

According to Batyrbekov, the research potential of KTM will address numerous engineering and scientific issues. Indeed, in the next two years, the facility will turn into a platform for joint research under the programme of cooperation of Commonwealth of Independent States countries in the peaceful use of atomic energy until 2020 called Cooperation Atom-CIS.