By Malika Orazgaliyeva in International on 21 June 2017 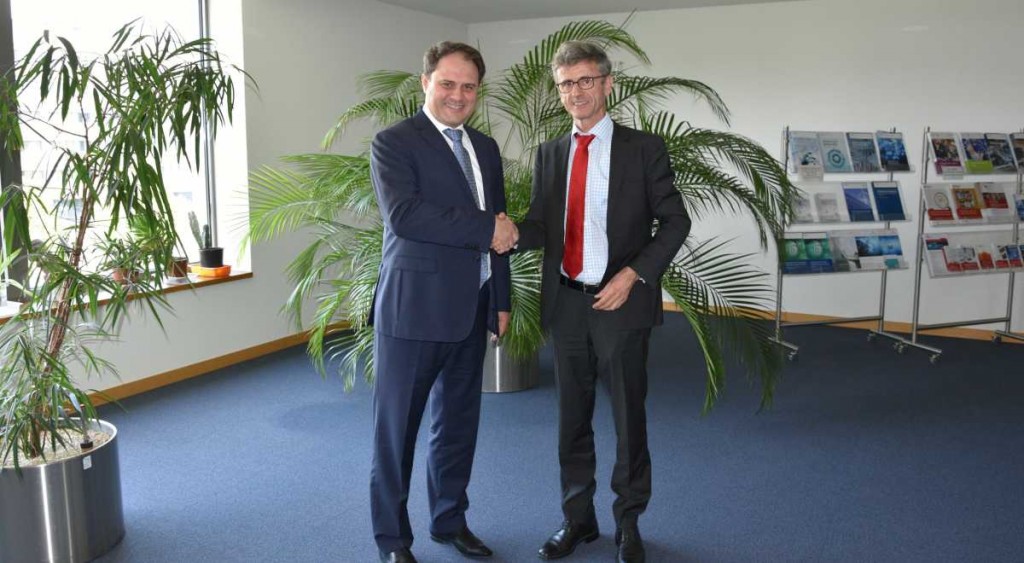 “Since 2014, Kazakhstan has been implementing a major $24 billion national development programme Nurly Zhol. This is designed to modernise and expand our transport and communications infrastructure to stimulate the growth of trade flows across the country,” Vassilenko said.

The OSCE is the world’s largest regional security organisation, comprising 57 nations across three continents – North America, Europe and Asia. The OSCE has held annual conferences with its Asian Partners for Cooperation (Afghanistan, Australia, Japan, the Republic of Korea, and Thailand) since 2000.

The event was opened by Special Representative of the Federal Government for the OSCE Chair Gernot Erler and the organisation’s Secretary General Lamberto Zannier. Representatives of OSCE countries, invited guests from ASEAN and ASEM, as well as other partner countries attended.

Vassilenko told the gathering Kazakhstan can become a regional and global actor in addition to improving its domestic transport infrastructure.

He stressed Central Asia’s role as a strategic bridge between the world’s largest markets with a combined population of 4.4 billion people, as well as the need to strengthen interregional and international economic integration. He also spoke about transport infrastructure development projects in Kazakhstan.

“Our country has become fully engaged in several international projects: the revival of the Great Silk Road routes; the development of the East-West transport route – a continuation of the TRACECA project initiated by the European Union in the 1990s; the completion of Kazakhstan’s segment in the West Europe-West China transit corridor; and, more recently, the launch of the One Belt, One Road initiative,” Vassilenko said, noting the importance of working with international organisations to maximise Central Asia’s transit potential.

“The Great Silk Road of the past is being recreated in steel and asphalt these days in front of our eyes. And there are few places in Eurasia where this can be seen more clearly than in Kazakhstan, the world’s ninth largest country, the heart of the Great Silk Road or, as someone has called us recently and quite succinctly, the “buckle” in the Belt and Road Initiative,” Vassilenko said.

“During the 25 years of our independence, Kazakhstan has built 2,500 kilometres of new railways. This is more than in all CIS countries combined. Furthermore, we have built 4,000 kilometres of new roads, including the already mentioned Western China-Western Europe highway. We have expanded and modernized our seaports in Aktau and Kuryk on the Caspian Sea. We have built the Khorgos dry port and special economic zone on the border with China. We have built transport and logistics centres throughout Kazakhstan. And we have established a key presence abroad through Kazakh terminals at the Port of Lianyungang in China and elsewhere,” the deputy foreign minister noted.

The transit market reaches beyond national borders and its development requires close interaction of all participants of transit routes, he noted explaining that, taking this into account, Kazakhstan is promoting initiatives for the development of multimodal transport corridors, which will allow carrying out transit of goods through the territory of Kazakhstan in the three directions from China. The first one goes to Russia and further to Europe; the second one goes from Khorgos, on the border with China, to Aktau port, then across the Caspian Sea to Azerbaijan, then through Georgia, Turkey and further to Europe, while the third one goes to Iran, the Middle East, India and Pakistan. There’s another transit route traversing Kazakhstan, going in the North-South direction through the territories of Russia, Kazakhstan, Turkmenistan and the Gulf states.

“We estimate the potential traffic along these corridors at 1.7 million TEUs per year by 2020, if not more,” Vassilenko said.

The implementation of these initiatives requires the signing of multilateral agreements relating to major international transport corridors aimed at creating legal and institutional conditions for the functioning and management of the corridors, including the establishment of so called coordination committees, the diplomat explained.

“So to complement the efforts on building the hard infrastructure, we have worked with partners, from China to Russia to Belarus to Azerbaijan to Iran to Turkey to Georgia to Romania and many others to develop soft infrastructure,” Vassilenko said. “We have created partnerships, adjusted regulations and processes so that it becomes mutually profitable for companies and transit countries to use those routes. I am talking about arrangements such as the Unified Transport and Logistics Company, with Russia and Belarus, and the Trans-Caspian International Transport Route with Azerbaijan, Georgia, Turkey, and, since recently, Romania. We have worked with China under the Belt and Road Initiative, including on developing cooperation at Khorgos by establishing partnership there with COSCO, the world’s largest shipping company, and the port of Lianyungang just last month. And just last week in Astana, Kazakhstan Temir Zholy, our government entities and DP World, a major global operator of marine and inland terminals, inked two MoUs for developing a port community system (PCS) for the Eurasian Transcontinental Trade Corridor.”

According to the Kazakh diplomat, his country now accounts for 70 percent of transit traffic passing from China to Europe and vice versa. Transportation through Kazakhstan reduces delivery time from China to Europe down to 13-15 days with the route speed of container trains of 1200 km per day.

“Since 2011, the number of TEUs shipped from numerous locations in China via Kazakhstan to logistic centres in Duisburg, Hamburg, Nurnberg, Lodz, among others, has grown almost 100 times (!) – from slightly more than 1,200 a year then to 105,000 TEUs last year,” Vassilenko said. And the plans are afoot to reach the volume of at least 1.7 million TEUs by 2020, including shipping 800,000 TEUs along the China-Europe-China route, 300,000 TEUs along the China-the Caucasus-Turkey route, and 680,000 TEUs along the route of Kazakhstan-Turkmenistan-Iran. In fact, we further estimate that the volume of transit shipments along those routes can reach 2 million TEUs by 2020.

He further explained that these developments and massive investments of money and effort on behalf of so many countries over the past several years would not have been productive if not for the changing circumstances on a macro-level.

“What we mean is that given the complex processes of globalisation, the changes in geography of global production and the dynamic growth in China over the past three decades, and the increase in the share of goods with high added value in consumption, Eurasian transportation routes have again become attractive compared to maritime transportation,” he said.

In particular, the intensive development of western and central regions of China, one third of whose exports accounts for high-technology products with a short life span of demand, conditions the attractiveness of trans-continental land routes through Kazakhstan.

“The cost of shipping along this route is now comparable to the maritime one, given the distance from the production centres to the ports on China’s east coast and given the fact that the time of land shipment to Europe is three times shorter than the maritime one,” Vassilenko noted.

In addition to expanding opportunities for cargo transportation, there have been positive developments in terms of connectivity for people-to-people contacts. Just recently, new passenger trains were launched to connect Almaty and Tashkent, Tashkent and Astana, and Dushanbe and Astana, Vassilenko said.

According to the speaker, the international organisations, such as the Eurasian Economic Union, and dialogue platforms with actors such as the European Union, Japan, South Korea and the United States are important for building up the connectivity potential of Central Asia.

“The recent accession of India and Pakistan to the Shanghai Cooperation Organisation as full members, which took place at the SCO historic summit in Astana earlier this month, will certainly contribute to further expanding economic cooperation in Eurasia,” he further noted.

Vassilenko further dwelt on the potential for cooperation under the Conference on Interaction and Confidence-Building Measures in Asia (CICA) initiated by Nazarbayev in 1992 and the more recent proposal to turn CICA into an Organisation for Security and Development in Asia (OSDA).