Jackie Chan didn’t get paid for his trip to Astana

Actor, producer and director Jackie Chan did not ask for a payment nor a rider for his visit to Astana, said Kazakhstan broadcasting station chairperson Yerlan Karin. 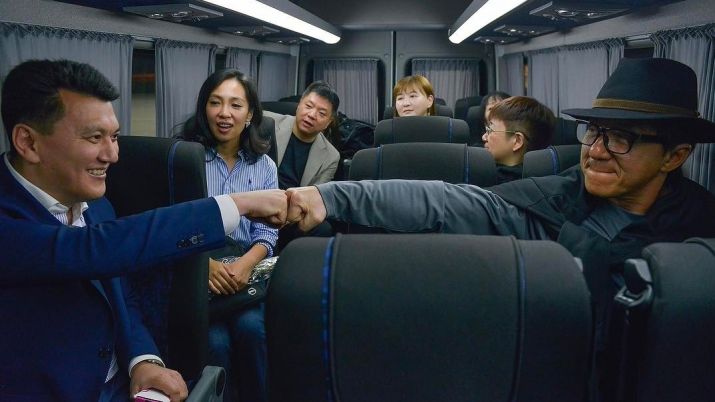 Karin said that the plans only included Chan’s participation in the opening of the festival of Chinese cinema. However, Chan went on to meet with people, held a press conference and was a talk-show guest over the course of half a day.

“What’s more surprising is that his arrival in Astana did not cost us anything! He flew on a private plane, with friends, no one paid him any fees, and he did not give us his rider. Even refused to be met in a luxury car but asked for an ordinary minivan to travel around the city with friends. Local Astana restaurateurs were so happy to see their idol that even for dinners we did not have to pay anything. It was planned that he would stay in Kazakhstan for a couple of days, but because of the tight schedule it turned out to be only half a day,” Karin wrote in his Instagram.

According to Karin, the only expenses incurred by the Kazakh side were souvenirs and tickets for EXPO 2017.

“Jackie is an amazing, very modest, good-natured, sincere and cheerful person. He didn’t turn anyone away from a joint photo, joked and laughed,” said Karin. “He liked it in our country and he promised to come again soon for a longer time to work in joint projects. We are looking forward to that.”

Chan visited Astana for the opening of the festival of Chinese cinema. At a press conference, he said that he wanted to come to Kazakhstan for a longer time, especially after he saw pictures of beautiful places in Kazakhstan. He is planning to shoot a film in Kazakhstan. He also shared his impressions about singer Dimash Kudaibergenov.

At the festival, Chan sang a song in his native language and was joined on stage by Kudaibergenov. The two first met in China when the Kazakh singer participated in the contest “I’m a Singer.”