ASTANA – The Kazakh capital hosted the 17th Shanghai Cooperation Organisation (SCO) summit June 8-9, with the accession of India and Pakistan and anti-extremism convention topping the agenda amid hopes of bolstering the organisation’s presence in Eurasia. 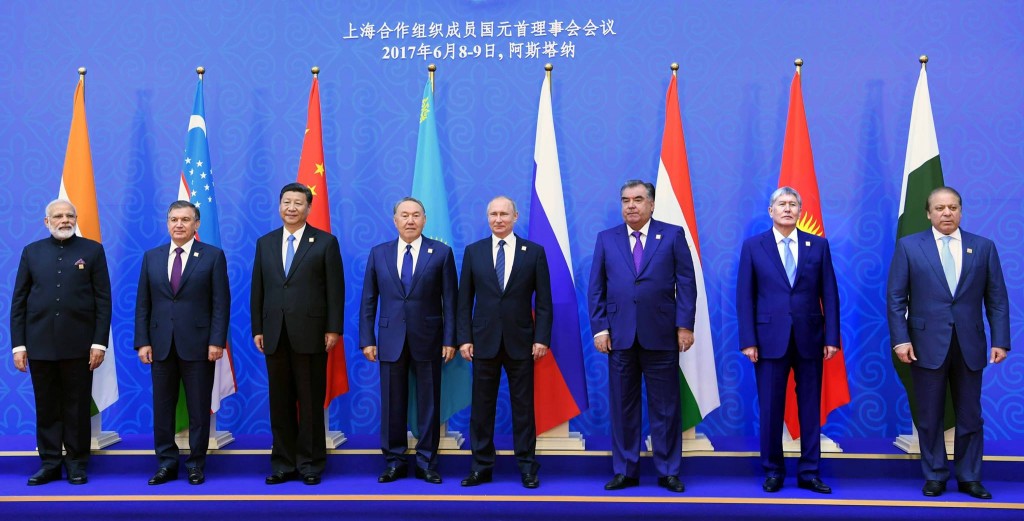 While the world had its collective eyes on the Kazakh capital as it held the summit and launched EXPO 2017 June 9, President Nursultan Nazarbayev conducted a number of bilateral meetings with the heads of state who arrived in the run up to the summit.

During the meeting of the Council of the SCO Heads of State, he noted the accession of India and Pakistan would give new impetus to the growing-in-numbers organisation and raise its international status. Nazarbayev added this was the last time the heads of only the six states – China, Kazakhstan, Kyrgyz Republic, Russia, Tajikistan and Uzbekistan – would be seated at the negotiating table, as the next summit will include the two new member nations.

The Kazakh President noted due to the SCO, China and the former Soviet states resolved border issues, managed to strengthen regional security and counter extremism.

Undoubtedly, the accession of military and economic powers such as India and Pakistan will only enhance the organisation’s security agenda and presence in the Eurasian space, according to Kazakh political experts.

In addition, many hope the move will break the ice in bilateral relations between India and Pakistan. India’s Prime Minister Narendra Modi already met with his Pakistani counterpart Nawaz Sharif June 8 after a two-year cool-off and they had a brief chitchat.

“With India and Pakistan aboard, the SCO unites about 40 percent of the planet’s entire population,” Nazarbayev said June 7 at the Akorda presidential residence during a meeting with the SCO defence ministers.

“The priority is to preserve the ‘Shanghai spirit,’ which is based on the solution of all emerging issues on the basis of consensus,” he added.

The President also stressed the need to strengthen the economic component within the organisation’s activities.

“The positive dynamics of the SCO are currently conditioned by the development of the New Silk Road programme. This programme is supported by all members of the organisation, first of all by Kazakhstan – China’s neighbour,” he said.

The leaders of the SCO states expressed hope the organisation will solidify efforts in countering pressing issues and continue strengthening regional security.

Seventeen heads of state and government visited the Kazakh capital to either attend the summit or witness the historic, for Kazakhstan, event – the grand opening ceremony of the expo. In addition to the SCO members and observers, presidents of Armenia, the Czech Republic, Serbia, and Turkmenistan, the king of Spain and the prime minister of Luxembourg attended the launch of the expo, along with the UN Secretary General.