By Zhanna Shayakhmetova in Business on 13 June 2017

ASTANA – Among the announcements at the June 11 Meeting the Challenge of Sustainable Energy Ministerial Conference in Astana was an official declaration to build a UN-backed sustainable energy centre at Astana’s EXPO 2017 site and a nearly $45 million investment in solar power in Kazakhstan. 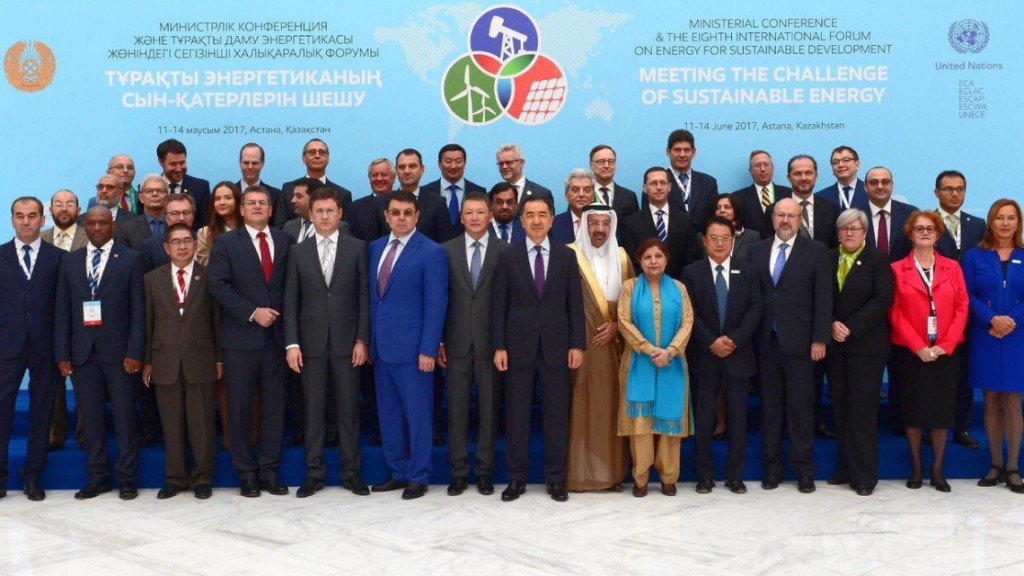 The Future Energy international centre for the development of green technology and investment projects is to be created and housed within infrastructure built for EXPO 2017 in Astana. The centre will be supported by the UN, the conference said in the declaration it adopted.

The mission of the centre is to contribute to global sustainable development by supporting green growth and the principles of the Green Bridge partnership programme.

In turn, the European Bank for Reconstruction and Development (EBRD) announced plans to invest $44.5 million in solar power plant construction in the country.

“Burnoye Solar 2 is a very significant project for us. We were proud to support Burnoye 1, the first large-scale solar plant in Kazakhstan … It works, it wins awards and now we are doubling it. It shows that renewable energy is not just a dream but a reality now for Kazakhstan. The Burnoye project will be co-financed with the Clean Technology Fund, a multilateral fund that supports development of renewables and the enabling environment. We hope a real viable market of renewable energy will soon emerge in Kazakhstan and in the region,” said EBRD Managing Director for Energy and Natural Resources Nandita Parshad.

Kazakhstan’s green energy sector will boost the country’s gross domestic product by 3 percent by 2050, said Kazakh Prime Minister Bakytzhan Sagintayev in his remarks at the opening of the conference.

“The government is currently working on the implementation of the third modernisation. Green economy reform will increase Kazakhstan’s GDP by 3 percent by 2050 and create more than 500,000 new jobs. New sectors of industry and services will be established and quality of life will be improved,” said Sagintayev.

The prime minister noted that the international community must continue to discuss the current situation and understand what actions need to be taken by the governments of different countries and international organisations to ensure sustainable development in the energy sector.

“We need new models for the global energy market, which should give an impetus to the development of the world economy and find a balance between economic development and the preservation of the ecosystem of the planet. This is our responsibility to the future and future generations,” he said.

“The total reserves of primary energy resources of Kazakhstan, including oil, gas, coal and uranium, are estimated at the equivalent of about 32 billion tonnes of oil, which is about 4 percent of the world’s energy resources. The country ranks 12th in terms of hydrocarbon reserves. Kazakhstan is the world leader among countries having uranium reserves,” the minister said.

Approximately 15 percent of the country’s GDP today comes from revenues from the sale of hydrocarbons, but Kazakhstan intends to develop a low-carbon model for its future economic development, and to reduce emissions of sulphur oxide, nitrogen oxide and solid particles to the European level.

“Kazakhstan, as a reliable and responsible participant in providing an energy security system, calls for sustainable political and economic development. We joined efforts and interests of representatives of 15 countries and 16 nongovernmental international organisations to stimulate green economic growth by promoting the Green Bridge partnership programme,” he said.

The International Renewable Energy Agency (IRENA) plans to collaborate with the Central Asian countries to capitalise on substantial renewable energy potential. Six key areas to facilitate the up-take of renewables and help diversify the region’s energy mix were identified in a regional action plan.

“Covering over 4 million square kilometres, the countries of Central Asia are endowed with rich renewable energy sources that can drive sustainable economic development and growth. With renewable energy targets in place for 2020 and beyond, the region can now seize this transformative opportunity for a sustainable energy future, and the new Action Plan will help boost efforts of renewable energy uptake,” said IRENA Director General Adnan Amin.