ASTANA –Diplomats, politicians and diplomacy experts from Kazakhstan and abroad praised the country’s quarter-century of diplomatic efforts at a June 29 conference in Astana held on the eve of the July 2 25th anniversary of Kazakhstan’s diplomatic service. 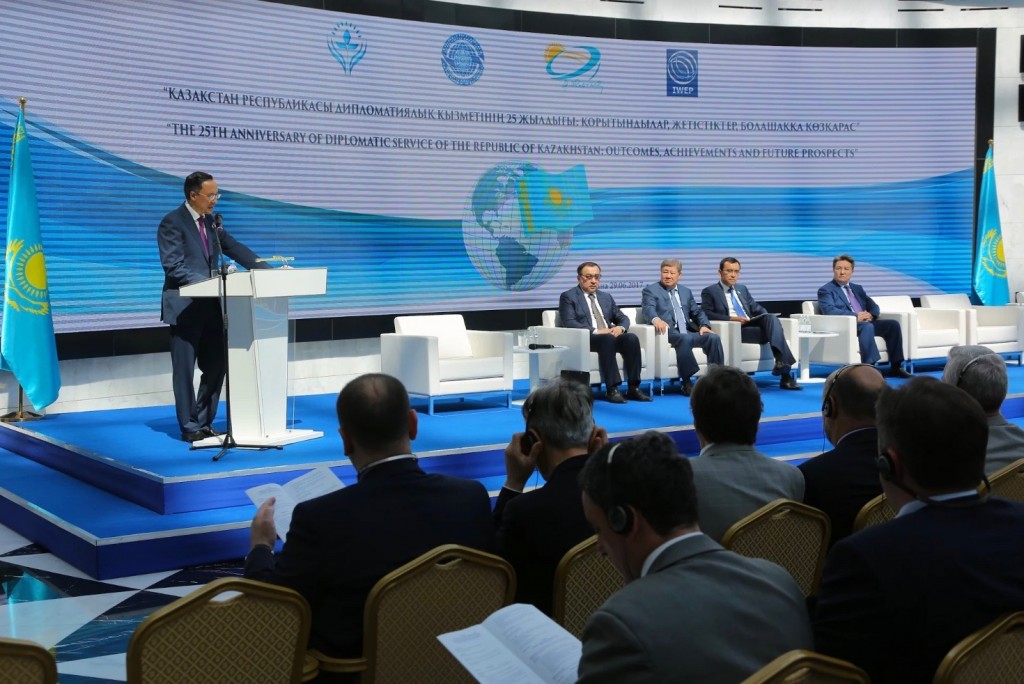 The conference was held jointly by the Kazakh Foreign Ministry, the Foundation of the First President of the Republic of Kazakhstan – Elbasy and the Institute of World Economy and Politics (IWEP).

Abdrakhmanov said in his opening remarks that  Kazakh diplomacy has created a reliable system of relations with all countries and international organisations based oncooperation and pragmatism.

“Thanks to the First President’s well thought-out foreign policy course, Kazakhstan is deservedly perceived on the world stage as a generator of stability and a dynamic and prosperous model of state development. Our country has rightfully become a recognised nuclear disarmament leader and an active moderator in the dialogue of cultures, religions and civilisations. Today, Kazakhstan equally participates and contributes to the solution of regional and global issues of the modern world,” he said.

Abdrakhmanov also praised the work of Kazakh Foreign Ministry veterans who laid the foundation for Kazakhstan’s role on the international stage.

Onzhanov, whose new book “Peacemaker. The Syrian Knot” was presented during the conference, noted Kazakh President Nursultan Nazarbayev’s contribution to resolving conflicts, including tensions between Russia and Turkey in 2015-2016 and the six-year-long Syrian crisis.

“Entering the UN became a landmark event in the creation and development of independent Kazakhstan’s diplomatic service. The UN has always been and still is Kazakhstan’s top foreign policy priority in multilateral diplomacy,” she said.

First Minister of Foreign Affairs of independent Kazakhstan Tuleutai Suleimenov noted in his remarks that Kazakhstan’s diplomatic service contributed to the creation of Kazakhstan as we see it today.

Numerous figures also said President Nazarbayev’s multi-vector foreign policy is the best option Kazakhstan. The country’s large-scale initiatives and projects have become firm guarantees of the state’s sovereignty and territorial integrity, the basis for safe and stable development in a long-term historical perspective.

The conference also included a photo exhibition illustrating the milestones of the formation of independent Kazakhstan’s diplomatic service. The exhibit and the short video included rare archive photos and video footage relating to Kazakhstan’s first steps in the international arena in 1991, President Nazarbayev’s initiatives to convene the Conference on Interaction and Confidence-Building Measures in Asia (CICA) and the summit of the Organisation for Security and Co-operation in Europe (OSCE), active mediation in complex global political crises, election as a non-permanent member to the UN Security Council, EXPO 2017 and more.