By Zhanna Shayakhmetova in International on 24 June 2017

ASTANA – More than 600 delegates from 60 countries gathered June 22-24 near the site of EXPO 2017 for the 14th Eurasian Media Forum (EAMF) to discuss the media’s role in a turbulent world. 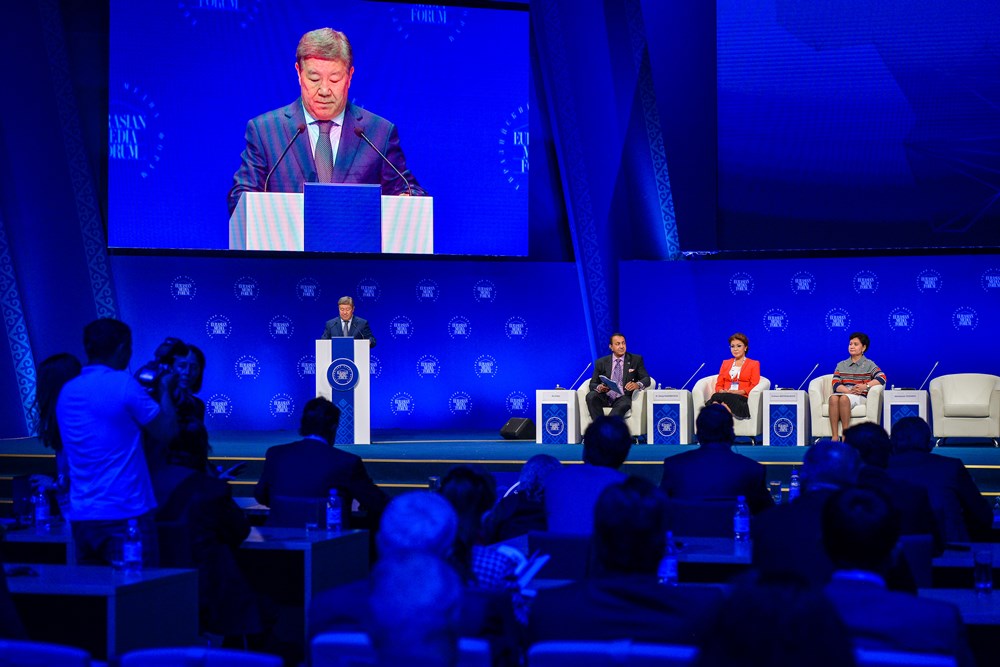 “When the world undergoes dramatic changes, the demand for dialogue platforms inevitably increases. The media should become the leaders of this process and concentrate efforts on uniting nations and countries, rather than erect new barriers. The world has entered an era of the new information environment, and we must do everything to encourage partnership and knowledge sharing,” said Kazakh State Secretary Gulshara Abdykalikova in opening remarks as she read out the welcoming address from President Nursultan Nazarbayev.

Nazarbayev noted the forum has become known over its 15-year history as a place to discuss media and global issues.

“Readiness for the upcoming social and technological changes is the determining factor for sustainable development. The green economy as a key direction of changes in the technological order is consonant with the theme of the exhibition in Astana,” Abdykalikova said. 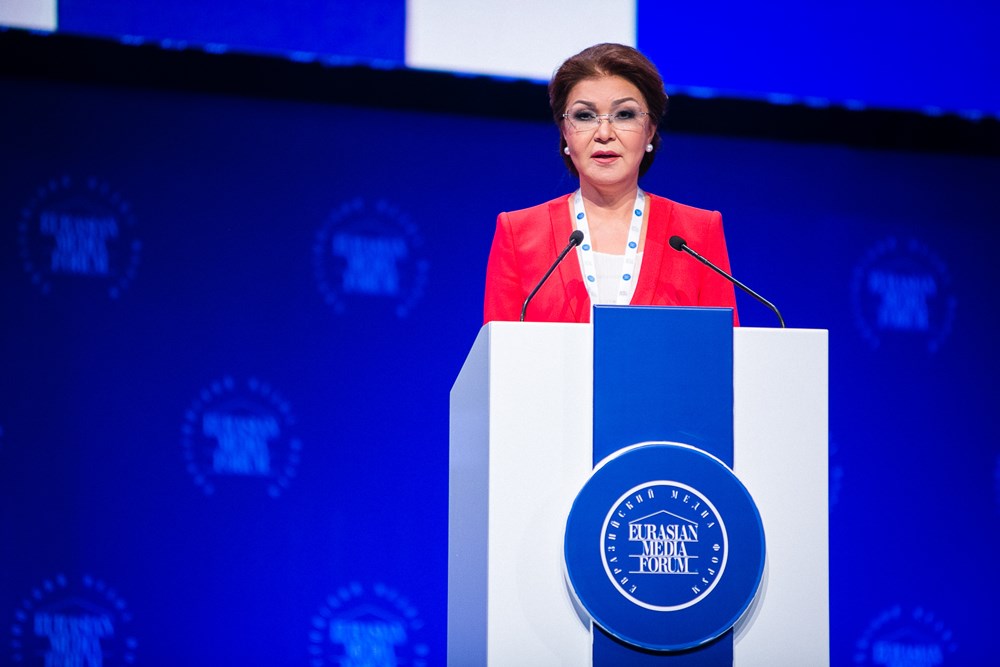 In her opening speech, EAMF Organising Committee Chair Dariga Nazarbayeva said the society is in a condition of political instability and technological revolution. The forum aims to help the media community find answers to issues about the future and professional ethics.

“The present period is an era of uncertainty and fear, an era of uncontrolled freedom. Is this true? Globalisation was associated with progress. Now globalisation frightens people and, as a result, they oppose the globalisation with the ideas of radicalism, nationalism and the rejection of integration processes,” she said. 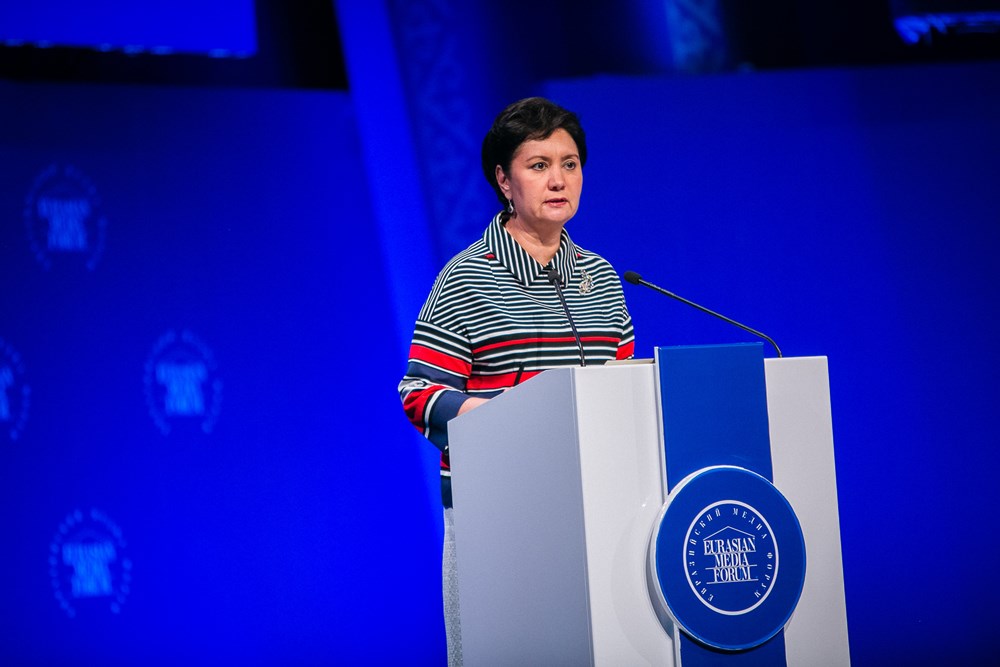 The terrorist attacks and the civil war in the Middle East dramatically increased flows of refugees that have become a heavy burden for many European countries.

“There are two crucial values without which human life is simply inconceivable. One is security and the other is freedom,” Nazarbayeva said citing Zygmund Bauman.

“They are both necessary. Security without freedom is slavery. Freedom without security is complete chaos where you are lost, abandoned, you don’t know what to do. The question is what the modern generation will choose,” she said.

“We cannot build a new balanced world based only on narrow-minded ideologies, negative stereotypes and pessimism. We should raise a new generation of strong people and the past tragedies won’t be obstacle to moving forward,” she said. 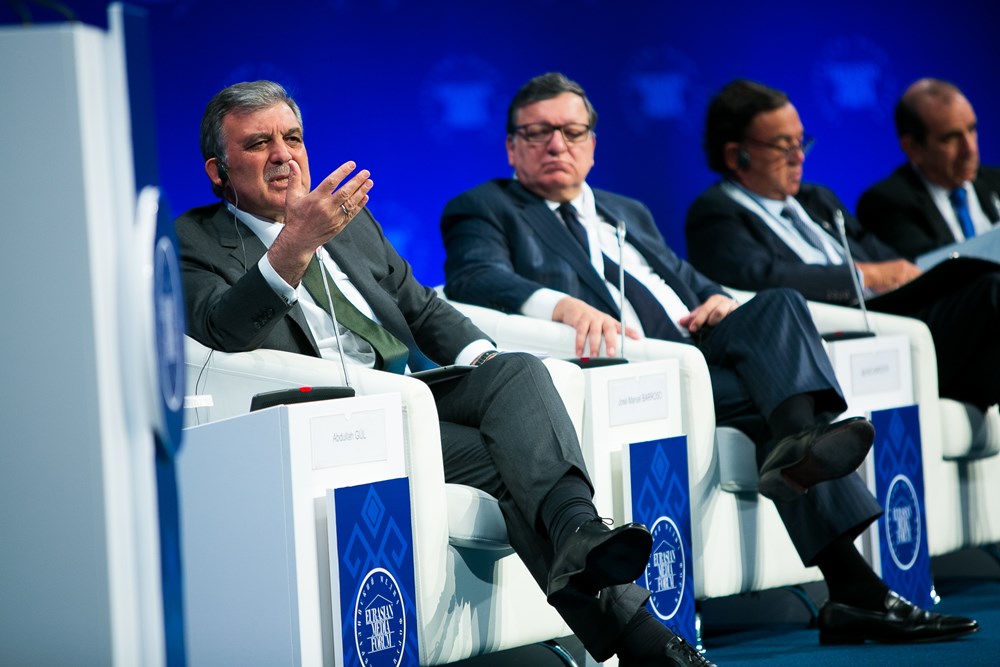 Reporters, Nazarbayeva noted, should take some semblance of the Hippocratic Oath and be guided by the most important principle of healing, “Do not harm,” just like medical experts.

British television journalist Nik Gowing, who moderated the first panel session under the title “Changes in the world order: building bridges or walls?” said that many things have happened since last year’s meeting, including the U.K.’s vote to leave the European Union, the presidency of Donald Trump, fake news phenomenon and how one incident became a threat to the United States’ largest airline.

“These are massive challenges and existential threats not just in geopolitics but also in the corporate sector as well. The walls and bridges are moving significantly,” he said.

Former European Commission President José Manuel Barroso outlined general trends against globalisation and spoke about Brexit consequences, new approaches of Trump’s policy, the United States withdrawal from the Paris Agreement and China as a stable partner in global interaction in his speech.

“Globalisation is happening today and it is done by science, technology, information, communication. The reality is that there is not one country that is controlling globalisation. Some time ago some people were making suggestions that globalisation is some form of americanisation of the world. This is simply not true … When there are very strong winds of globalisation people tend to close themselves, to try to retreat and there’s isolation, protectionism, nativism, phobia,” he said.

Barroso said that if people want to succeed, they have to invite their children to be open and to embrace the great opportunities of globalisation. “And this is our simple message we should try to give. Of course, we have negative effects from financial instability to international terrorism. They require a more cooperative, global approach,” he added.

“Sense of collectivism is disappearing. I see in the future we might face more problems and the world is not ready to challenge, to tackle, to handle these problems,” he said.

Delegates also discussed the green economy concept, sustainability in the era of crises and steps towards global leadership in world markets and how information flow changed the world.