ASTANA – With permission from the Astana EXPO 2017 national company, Chinese companies Wanbo and Zhangdao Wenhua have issued memorable banknotes and a postage stamp dedicated to the EXPO 2017 international specialised exhibition in Astana and the 25th anniversary of the establishment of diplomatic relations between Kazakhstan and China. 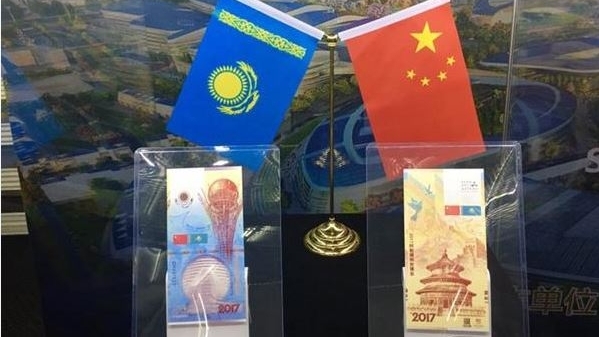 The banknotes and stamp were presented at a recent press conference in the Pudong area in Shanghai. Representatives of the Kazakh Consulate General in Shanghai, the promotion and tourism department of the Astana EXPO 2017 national company, the Committee for the Promotion of International Trade of China, the Foreign Affairs and Trade Chamber of Shanghai, the party leadership of the exhibition area of the Shanghai Free Trade Zone and approximately 50 large Chinese enterprises, as well as collectors of rare bills and representatives of the media attended.

This was the first issue of commemorative currency for an expo since 1851. The bank notes (without denomination) are issued in the amount of 5,000 sets, each of which has two bank notes showing Kazakhstan – with the Baiterek Tower on a blue background and the National Pavilion of Kazakhstan at the expo; and China – the Great Wall and the Temple of Heaven on a yellow background.

Consul General of Kazakhstan in Shanghai Zhoshykhan Kiraubayev noted during the unveiling that this year has been declared the Year of Chinese Tourism in Kazakhstan and that the Chinese president was about to visit Astana. He also invited the Chinese public to take part in expo activities.

Participants of the press conference were shown a video and were provided booklets about the exhibition.