ASTANA – The Kazakh capital is turning into the world’s largest performance venue this summer. During the more than 90 days of EXPO 2017, the city will offer a rich cultural and entertaining programme featuring local and foreign artists. The Astana Opera House and Astana Ballet Theatre have unveiled the upcoming performance schedule. 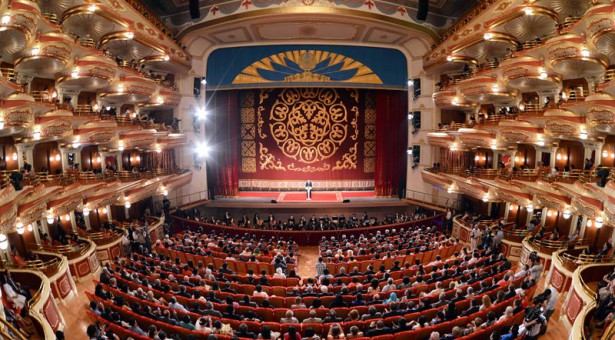 “Abai,” the national production of one of the outstanding operatic achievements of Kazakh musical art created by composers Akhmet Zhubanov and Latif Khamidi, will be staged June 11.

Abai was a great poet, educator and philosopher who will always remain a spiritual master of the nation. The opera unveils the depth of experience and thoughts of this powerful personality.

“Abai is very important to the Kazakh people. He carried out a creative, social, political and cultural mission. He always looked to the future, thought about the people and was with the people,” said Production Director Giancarlo del Monaco.

“Manon,” a dramatic ballet from the repertoire of London’s Royal Opera House, will be performed June 17 at the capital’s opera house. The presentation will be staged with the design of the late renowned British choreographer Sir Kenneth MacMillan and to the music of Jules Massenet.

The ballet tells the tragic love story of Manon Lescaut and the Chevalier des Grieux, with the heroine facing a difficult choice between wealth and love. The pas de deux of the main characters is the dramatic centre of the narrative.

The Kazakh masterpiece opera “Kyz Zhibek” by Yevgeny Brusilovsky will be staged June 22.

Astana Opera is preparing “Verdi reads Verdi,” a magnificent show with the participation of outstanding Italian playwright, actor and filmmaker Massimiliano Finazzer Flory, for June 23. Flory will offer viewers an original interpretation of the key moments of Giuseppe Verdi’s biography. On stage, Verdi will speak in detail about his life from early childhood to excerpts from his will. The audience will learn about his relationship with music, composer Richard Wagner and librettist Arrigo Boito, listen to advice for young composers and singers and reflections on art, theatre, music and culture.

A concert of Italian classics will be organised June 24 as part of the expo cultural programme with the participation of young Italian pianist and winner of the 2016 FVG International Piano Competition Stefano Andreatta and the Astana Opera symphony orchestra conducted by Eddi De Nadai (Italy).

The Kazakh Ministry of Culture and Sports, Kazakh Auenderi Company and the theatre will present Ludwig Minkus’ ballet “Don Quixote” staged in the open air by the People’s Artist of Russia and Astana Opera art director and head of the Kazakh National Academy of Choreography Altynai Assylmuratova. The choreographic masterpiece will be held June 25 in front of the Palace of Peace and Harmony as part of the expo cultural programme.

“Our team sets task to dance well everywhere, whether it’s an open area or a theatrical stage. Initially, the production involves changes in scenery and the use of various techniques possible due to the stage equipment in the theatre. Therefore, the performance will be adapted for presentation in the open air. The festive atmosphere of noisy Barcelona will be created at the foot of the palace. We also invite all the guests to the theatre, where they will be able to watch this temperamental, virtuosic ballet in full, in its entire splendour,” said Assylmuratova.

The magnificent scenery of famous stage designer Ezio Frigerio, colourful costumes of Oscar-winner Frank Squarciapino and skilful use of 3D effects and animation of projection designer Sergio Metalli will please the capital’s residents and guests, note the organisers.