ASTANA – The second preparatory meeting of the 25th Organisation for Security and Cooperation in Europe (OSCE) Economic and Environmental Forum took place June 14-16 in Astana and concluded with recommendations for participating states before the final meeting scheduled for September in Prague. 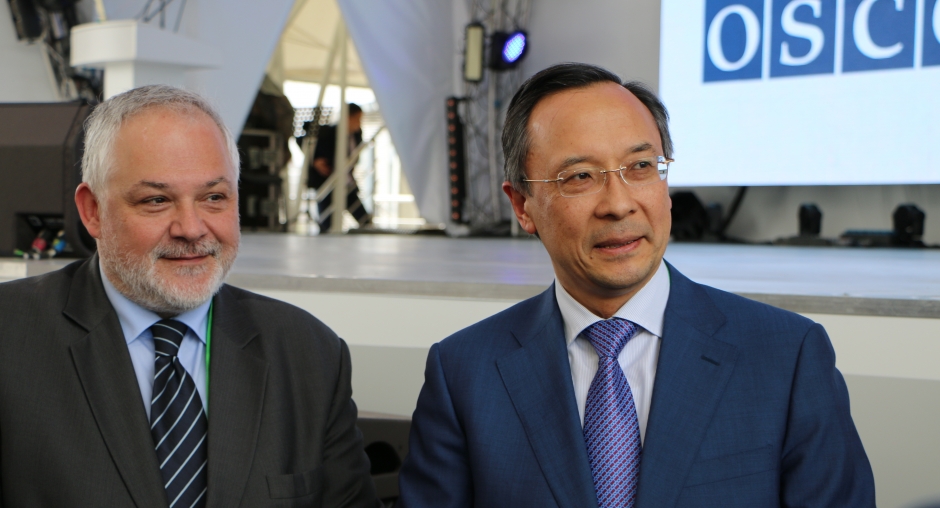 Representatives of 57 participating states of the OSCE, nongovernmental organisations, academic circles and international organisations gathered in Astana to discuss the transition to a green economy, efficient use of natural resources, energy security and environmental risk reduction.

Deputy Foreign Minister of Kazakhstan Roman Vassilenko stressed the importance of the OSCE in helping its participating states tap into their huge potential in economic and environmental activities.

“I believe holding the Second Preparatory Meeting in Astana at the time of EXPO 2017 will facilitate an active exchange of knowledge and experience among OSCE participating states, partners for cooperation and other interested parties actively involved in the work of the Economic and Environmental Dimension [of the OSCE],” Vassilenko said.

He also noted that the infrastructure built for EXPO 2017 in Astana would soon house a Future Energy international centre for the development of green technology and investment projects and a new research complex connected with Nazarbayev University where the meeting actually took place. “One of the most important goals is to exchange best practices and latest achievements in research and to foster the implementation of environmentally conscious technologies in economically feasible projects,” he added.

Coordinator for economic and environmental activities of the OSCE Vuk Žugić asserted that Kazakhstan’s Green Bridge initiative, a partnership programme for stable and long-term green investments, reaffirms the commitment to green economy, which also contributes to strengthening security in the region. “Only mutual cooperation and commitment to comprehensive, equal and indivisible security can bring success,” he said.

“One is the use of natural resources in order not to waste them and not to destroy your environment. Energy security is also an important topic, as is renewable energy, global warming, climate change, scarce resources and desertification in many countries. Good governance is how administrations govern to achieve the best impact for efficient use of energy. The last point is environmental risk reduction,” he articulated.

He also expressed gratitude to Kazakhstan for providing a platform for the meeting. “It was a joint initiative of the Austrian Chairmanship and the government of Kazakhstan that this should take place in Kazakhstan. We are very thankful that Kazakhstan provided the necessary means and organised it. It brought the focus a little bit away from Vienna to a very important region, namely Central Asia. It was a very good coincidence that at the same time the expo started in Astana, which is dealing with energy,” Raunig said.

“All 57 participating states of the OSCE decided to go to Astana. Everybody agreed Astana was a good choice. We came to Astana to discuss not only the environment, but also to support Kazakhstan’s efforts with the expo,” Deputy Head of Mission for the Economic and Environmental Dimension at the Permanent Mission of Austria to the OSCE Andreas Stadler said. Raunig and Stadler said it was their first time in Kazakhstan and Astana.

“I am overwhelmed by this city and also by the hospitality of the people. I am sure I will come back to see more of the country,” Raunig added.

“I am positively impressed. I want to come back. I am stunned by the progress this country has made and also incredibly motivated by how forward-looking this country is and in its investments in young people,” Stadler noted.

The OSCE Economic and Environment Forum is the main event in economic and environmental dimension, one of the organisation’s three dimensions. It gathers annually more than 400 representatives of governments, academia and international organisations to stimulate dialogue and cooperation on environmental issues.

The outcomes of the Astana meeting will complement recommendations concluded after First Preparatory Meeting in January in Vienna and will pave the way for the forum scheduled for Sept. 6-8 in Prague. They will also contribute to the results of the OSCE Ministerial Council Dec. 7-8 in Vienna.