It is unlikely that there will be a person who challenges the generally accepted truth that “the youth is our future.” Since each of us wants to see Kazakhstan in the ranks of the world’s most competitive countries in the near future, the country’s development vector is aimed at innovative education of Kazakhstan’s youth. Organisers of the second STEM and Art Festival, or STEAM Fest, held in Atyrau on April 30 as part of the Zangar educational project, did not stand aside. 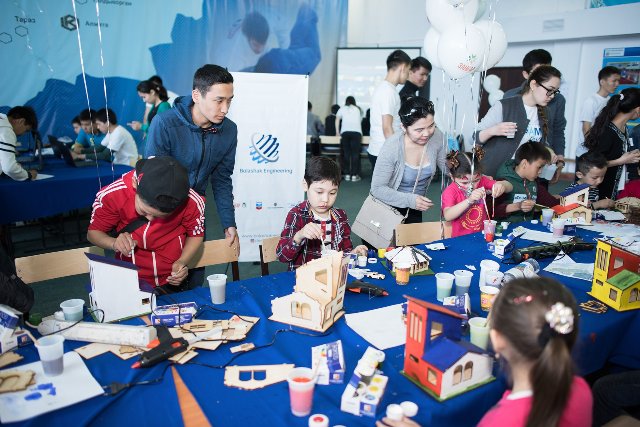 Increasing the interest of children and youth in studying STEM (Science, Technology, Engineering and Maths) which is of great importance in in the 21st century, and demonstrating STEM’s capabilities in art development became the main goals of the STEAM Festival organized by the International Youth Foundation in cooperation with Chevron, the Akimat of Atyrau region and local partner organisations. At the same time, the slogan of the festival, “Build a city with your family!”, calling on children and their parents to spend time in an interesting and useful way, contributed to the fact that the fest became a truly family event.

“We tried to diversify the content of the festival to make it interesting for all guests. While the target audience of the Zangar project is local youth aged from 10 to 22 years old, we organise STEM festivals for the whole family. Through such events, we aim to promote STEM education and show that STEM is not difficult and that basic exercises can be done at home, which can be a pleasant and useful pastime for the whole family,” explained Assem Satmukhambetova, Director of the Representative Office of the International Youth Foundation in Kazakhstan.

The results of the STEAM participants’ activities were reflected in the construction of the Zangar-City, a shared project presented by “smart” houses, houses with thermal insulation, eco-landscape and wind generators. The youngsters were enabled to implement all these ideas as they master knowledge and skills in engineering design, robotics and programming under the guidance of experienced trainers and volunteers. Acquiring the basics of engineering, younger children helped to decorate the city-project with “Skewer structures”, bridges and various 3D objects.

“I really liked the STEAM Fest, as I contributed to the construction of Zangar-City. It is wonderful when you can build a house, various structures, and create a game on the computer yourself. This experience was very useful for me. Working in a team with other guys, I found new friends here. We would like this festival to be continued in the future,” shared his thoughts Azamat Khismetollayev, 12.

The Dino Museum project located within the Zangar-City deserved a special attention. The fascinating work on the creation of the museum exhibits helped the children master the fundamental knowledge of 3D modelling. Meanwhile, what has become a custom of Zangar Festivals is the robotics competitions organised among participants of eight robotics clubs of the Zangar project. Such a variety of STEM activities has become possible with the help of Bolashak Engineering and Sumato Batys, local partners of the International Youth Foundation.

A key feature of the second Festival was that through interactive workshops, such as 3D Printing in Art and STEM in Jewellery, participants were given the opportunity to look at Art from the point of view of natural sciences. This allowed them to see the relationship between the two domains not connected with each other at first glance. It is noteworthy that the 3D Printing in Art seminar was held by first Zangar graduates, including Kairali Ashigaliyev, Alibek Yerzhanov and Yelisey Chalov who assembled a 3D printer using Fab Lab Atyrau’s technical potential. The youth could also see the STEM capacity for art development in the presented installations prepared by Zangar project’s participants, and including those developed under the guidance of the representatives of Sariyev Atyrau Regional Museum of Fine and Decorative Applied Arts. The art direction was also presented by master classes organized by ArtLab and a pottery master Aisulu Sanat.

Supporting the interest of their children in STEM-education, parents highly appreciated the importance of the event. Gulmira Gazizkyzy, who visited the STEAM Fest with her daughter, said: “My daughter learned computer programmes, and based on that she was able to make some products herself. STEM is important for the future and, hence, it is very important to promote it among our youth. As a parent I would like such events to be held more often.”

Parent support and successful mini-projects of young participants of the Festival gives hope for further active involvement of Atyrau youth in STEM-education. The construction of Zangar-City has surpassed expectations.