ASTANA – The 2004 Olympic champion Gaidarbek Gaidarbekov of Russia, the boxer who defeated Gennady Golovkin (GGG) in the finals of the Athens Olympics, believes GGG can beat Mexican Saul Alvarez, Gaidarbekov recently told The Astana Times. As previously reported, the fight between the world’s two strongest middleweights will be Sept. 16. This bout is called the most important boxing event of the year and awaited by millions of fans throughout the world. 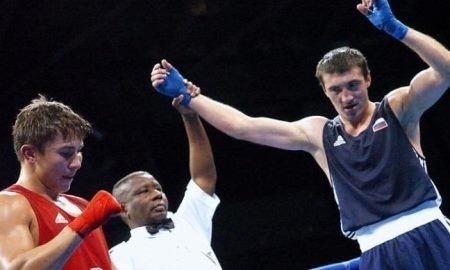 What do you think about Golovkin’s fight with Alvarez?

Alvarez is a dangerous fighter. I cannot say with absolute certainty, after all, it’s boxing, and anything can happen, but I see Gena has some prospects in this fight. Despite being a current boxing superstar, Golovkin does not relax, and it’s very good. Having this huge experience after a great number of fights, he needs to go further, and a fight against Alvarez could do good to Golovkin. I think Golovkin should take the initiative and take off in this fight. So, he really needs to make up his mind and get ready for a very tough bout, and then he will make it.

Both fighters have good striking power. Can we expect an open heavy fight?

No, they will box very carefully. Golovkin has good tactics in all fights. I did not quite like his last fight though. Jacobs played it very safe, so he couldn’t do well. The American was afraid of missing the blows, so he was very careful and did not get into full contact. Punch, then slip… He ran a lot, so it was hard for Golovkin. If I’m not mistaken, that was the first time in a long while  that Gena fought all 12 rounds. This time, I think, Alvarez will also be careful, but will make some occasional sudden attacks. I think the fight against Canelo, who is much slower than Gena, will be even easier for Golovkin than with Jacobs.

Because Alvarez will not be afraid?

Yes, Alvarez will fling a lot, and Gena will get him. Canelo is bolder, stouter and slightly lower than Golovkin. Gena will beat him and knock him out in the seventh or eighth round.

The famous Russian boxer also said that he was thinking about a possible fight between Gennady Golovkin and the legendary world champion Floyd Mayweather.

This will happen someday. If Floyd Mayweather wants it, I think this should happen. Both boxers are world stars, and this fight would be important for Floyd Mayweather himself. I believe Gena has all chances to win. Observing Golovkin, one cannot but say that he has grown very much in recent years. Today, he is like a cobra standing against his opponents. He has a very nice boxing style. He sees everything, and it’s very good. This is what boxing should be like.