By Aigerim Seisembayeva in Business on 30 May 2017

ASTANA – The World Organisation for Animal Health (OIE) recognised Kazakhstan May 25 as a zone free from foot and mouth disease (FMD). This will enhance Kazakhstan’s agricultural export to the member states of the World Trade Organisation (WTO), the Prime Minister’s press service reports. 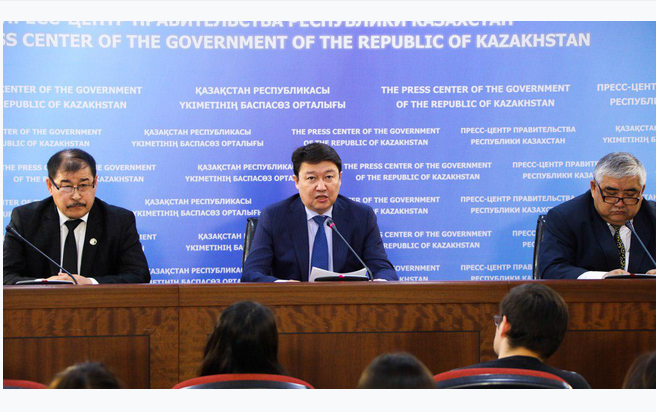 First Deputy Minister of Agriculture of Kazakhstan Kairat Aituganov said at a press briefing at the government that OIE delegates from 180 countries unanimously voted to assign this status to Kazakhstan at the session of the organisation’s General Assembly in Paris. He stressed this became possible due to the purposeful work on prevention and strict adherence to the FMD control strategy in accordance with international requirements.

In the post-Soviet space, Belarus and Ukraine are historically safe from foot and mouth disease. Russia, since 2016, has the status of a country that has certain FMD-free regions. The rest of the countries of the Commonwealth of Independent States (CIS) do not have this status.

“This status enables our country to export products of animal and vegetable origin to WTO member states, which will in turn help realise the export potential of the agro-industrial complex and positively affect the development of domestic entrepreneurs’ foreign trade activity,” Aituganov emphasised.

He also recalled that China’s authorised body on veterinary medicine (AQSAQ) lifted FMD restrictions because of the OIE’s decision for nine Kazakh regions in September 2016. The Veterinary Control Committee of Kazakhstan’s Ministry of Agriculture will continue to work with the Chinese to remove the restriction from the five remaining regions based on the newly received status.

The countries of the Persian Gulf, Iran and Israel are also ready to import livestock products export from the entire territory of Kazakhstan.

“OIE’s decision was the result of systemic changes in the country’s veterinary service under the new State Programme for the Development of the Agroindustrial Complex of Kazakhstan for 2017-2021 and opens new opportunities for domestic agricultural producers,” Aituganov said.

Agricultural producers and livestock scientists said at the briefing that the new status would also increase the production at meat processing factories, which therefore will increase the number of Kazakh White-Headed breed of cattle.

Beksultan Elubayev, vice president of Merke Yet, LLP from the Zhambyl region, briefed the press on production expansion in connection with the new status. According to him, the plant is ready to produce up to 10,000 cans of canned meat products daily and up to 300-400 kg of sausage products under the Halal brand. More than 70 additional jobs will be created.

Due to the status of an FMD-free zone, the plant can increase the number of cattle on the feedlot to 3,000.

“Obtaining the status of a zone free from foot and mouth disease will allow us, agricultural producers, to make wider use of the export potential of livestock products,” Elubayev said.

Chief Research Officer of the Scientific and Innovative Centre for Livestock and Veterinary Medicine of the Ministry of Agriculture Anuarbek Seitmuratov highlighted that thanks to the measures of state support for the agro-industrial complex, the Kazakh White-Headed breed increased to 230,000 over the past 5 years.

“The Kazakh White-Headed breed population is the largest out of 10 meat breeds bred in Kazakhstan. Now, after obtaining the status of a zone free from foot and mouth disease, livestock producers will have an opportunity to make a worthy contribution to the development of meat export potential and receive the proper return for their painstaking work,” Seitmuratov said.