By Aigerim Seisembayeva in International on 11 May 2017 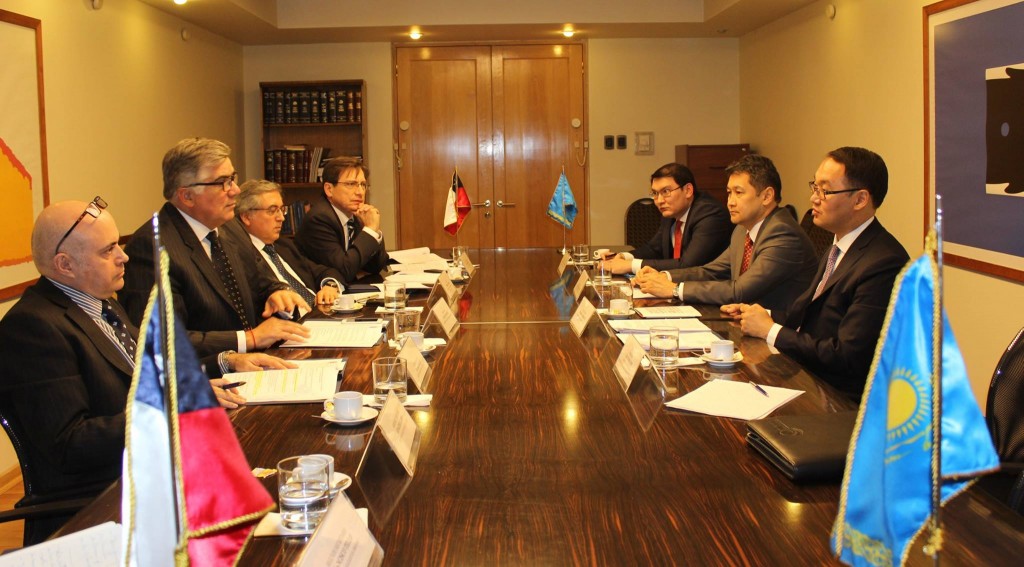 Kazakh and Chilean government representatives discussed bilateral relations during a May 3 meeting in Santiago focusing on business and trade.

Head of the Kazakh delegation Deputy Foreign Minister Yerzhan Ashikbayev briefed Chilean officials on Kazakhstan’s economic and political reforms meant to include the country among the 30 most-developed nations.

The group also discussed Chile’s signing the previous day of an agreement to participate in EXPO 2017, and Skoknic confirmed a business delegation led by Energy Minister Andres Rebolledo would visit Kazakhstan in August.

Ashikbayev then participated May 4 in Buenos Aires in talks with Argentinian Ministry of Foreign Affairs representatives, including Deputy Foreign Minister Pedro Villagra Delgado.

The group discussed scientific and technical cooperation, particularly in aerospace, as well as trade and economic cooperation. The Kazakh side proposed to make a list of goods with the greatest export potential and distribute it among the business circles of Kazakhstan and Argentina.

Ashikbayev noted Kazakhstan’s rich potential in the nuclear industry could be used by Argentina at a meeting with Deputy Minister of Energy Daniel Redondo.

Argentina’s participation in EXPO 2017 was discussed at a meeting with Minister for Media and Public Content of Argentina and EXPO Commissioner of Argentina Hernan Lombardi.

The Kazakh delegation then participated in Kazakh-Brazilian inter-ministerial consultations and held bilateral meetings with Brazilian officials.

Brazilian Ministry of Foreign Affairs Undersecretary General for Asia and the Pacific Georges Lamazière led the Brazilian delegation in the discussions of bilateral and multilateral cooperation, expanding bilateral trade and economic and investment cooperation, focusing on the Astana International Financial Center (AIFC).

Brazilian Secretary General of Foreign Affairs Marcos Galvão praised Kazakhstan’s foreign policy initiatives, including its priorities on the UNSC and efforts as an international mediator, including the Astana Process to resolve the Syrian crisis.

At Brazil’s Agency on Exports Promotion and Investments, Ashikbayev spoke about Kazakhstan’s investment opportunities, state support for investors and preferences for doing business in Kazakhstan.

Kazakhstan offered to sell uranium to Brazil to cover the shortage of fuel for its atomic energy programme and help explore the large reserves of uranium ore in Brazil.

“There is untapped potential in Brazil and we have the know-how to run large projects,” Ashikbayev said after the meeting.

Kazakhstan is the world’s largest producer of uranium and national operator Kazatomprom accounts for one third of the global output of the mineral.

“We proposed Kazakhstan’s participation in tenders for purchasing uranium or any other type of fuel that might be used in the Brazilian industry,” Ashikbayev said.

Among the Latin American delegations to visit Kazakhstan recently was a group of business people from Mexico.

Mexico is the world’s 12th largest food exporter. Its main markets are the U.S., Europe and some Asian markets. To minimise transportation costs, they are planning to deliver products using a two-way air service.

“It was not easy to convince them to come here. It was a work of several months, paying visits to different regions. We have gathered the most advanced Mexican entrepreneurs. They have very strong interests in investing and transferring production to Kazakhstan. They are looking for new markets, and here in Kazakhstan, there are plenty of opportunities. Any business can be launched and become a success, because there is consumption, there are markets, like the Eurasian Economic Union and China,” Ambassador of Kazakhstan to Mexico Andrian Yelemessov said at a May 5 briefing at the Kazakh Foreign Ministry in Astana.

He also proposed establishing a group of “Friends of Kazakhstan,” consisting of Mexican and Kazakh businesspersons and investors.

“This group should analyse and develop a roadmap that will reflect the entire list of goods of interest, possible routes and the final cost of the goods,” Yelemessov said.

The Mexican delegation also met with the leadership of Kazakh ministries and departments and national companies, such as Kazakh Invest, KazMunayGas, Tau-Ken Samruk, KazAgro and Baiterek.