ASTANA – Kazakh Foreign Minister Kairat Abdrakhmanov briefed local media May 18 on the ministry’s activities in the realm of economic diplomacy and fielded questions on issues ranging from the Astana Process to the One Belt, One Road initiative and the Astana International Financial Centre (AIFC). 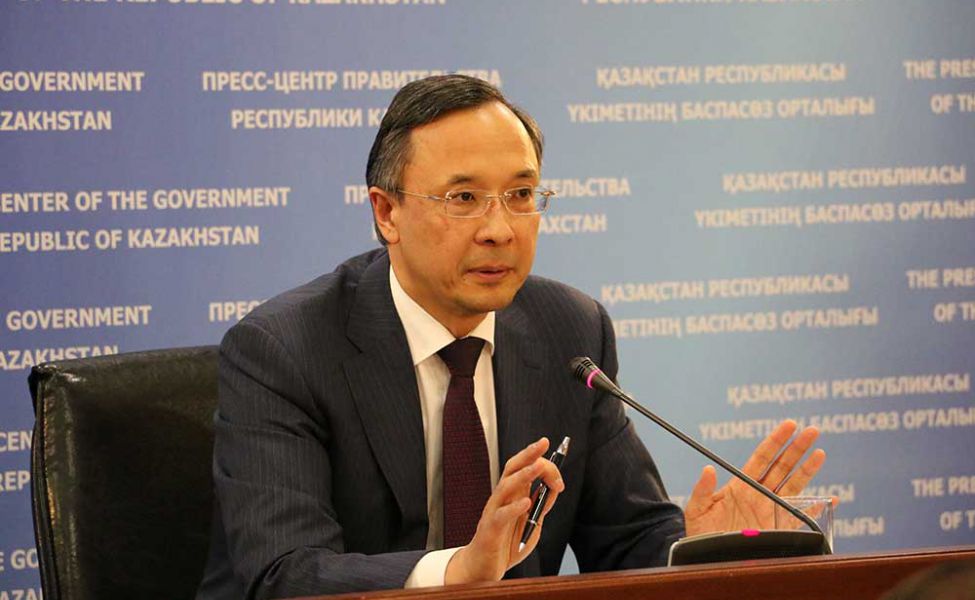 Calling economic diplomacy a top priority for the Ministry of Foreign Affairs, Abdrakhmanov said Kazakhstan has created institutions for interaction with investors at all levels.

“The meetings of the Foreign Investors Council under the President are held on the regular basis. The next meeting is scheduled to take place within the framework of EXPO 2017 in Astana. Also, the council for improving the investment climate headed by the prime minister, as well as the governmental council on attracting investors are continuing their activities,” he said.

“President Nazarbayev pays special attention to the development of economic diplomacy. Almost all of his official visits to foreign states include separate meetings with the local business community, where the majority of commercial agreements are being concluded. For instance, in 2016 during the presidential visits, 48 agreements were signed for a total amount of $1.4 billion in Iran, 20 documents totalling $520 million in Turkey, 10 agreements for $200 million in Saudi Arabia, 13 documents for $1.2 billion in Japan and 24 contracts for $640 million in South Korea. This year, the agreements on the implementation of joint investment projects worth $6.3 billion were reached during the President’s visit to the United Arab Emirates,” Abdrakhmanov said.

In 2016, the foreign ministry held more than 300 events oriented on trade, economic and investment, as well as organised more than 600 visits of foreign delegations to Kazakhstan and visits of Kazakh business delegations to foreign states, Abdrakhmanov informed the gathering.

The Diplomatic Business Club, created on the initiative of the foreign ministry, plans the organisation of the foreign ambassadors’ trip to the South Kazakhstan region to study investment opportunities of the region, which is a continuation of its practices from last year.

Speaking of cooperation with the Organisation for Economic Cooperation and Development (OECD), Abdrakhmanov noted that this year for the first time the OECD Eurasian Week will take place outside of the organisation’s headquarters in Paris, namely in Almaty on Oct. 23-25. The goal of this event is to strengthen relations between the Eurasian states and the organisation member countries.

As he answered questions from the assembled media, Abdrakhmanov said the next round of talks on ending violence in Syria as part of the Astana Process will take place, as scheduled, in mid-July and will be preceded by a technical meeting of experts in Ankara.

He also told the press Kazakh delegation’s participation in the May 14-15 One Belt, One Road Forum for International Cooperation in Beijing produced an agreement between Kazakhstan Temir Zholy and Cosco, the leading global transportation company, as well as a communiqué linking the One Road, One Belt initiative with other regional initiatives, including Kazakhstan’s Nurly Zhol programme.

Abdrakhmanov also said the ministry is helping develop the AIFC, including creating a single space at the centre to register foreign AIFC staff  and mechanisms to send AIFC staff to Kazakhstan’s foreign missions.

“The Ministry of Foreign Affairs assists the AIFC in attracting the major world financial institutions, organisations and companies to this project,” he noted. “President Nazarbayev visited international financial institutions in Abu-Dhabi and Dubai, where he held talks with their leadership and potential investors.”

The minister also noted China is a major trade and investment partner and that Kazakhstan is simplifying its visa regime for Chinese citizens coming to EXPO 2017.

Abdrakhmanov also mentioned that the fifth Caspian Summit that is expected to adopt the Convention on the Legal Status of the Caspian Sea will take place in Astana. Specific dates will be announced later depending on the progress in the talks over the convention.