By Malika Orazgaliyeva in Business, International on 26 May 2017

ASTANA – The Ministry of Foreign Affairs of Kazakhstan jointly with the Ministry of Defence and Aerospace Industry held May 25 a presentation for representatives of the diplomatic corps on the export potential of the country’s defence and aerospace industry and opportunities for cooperation with foreign partners. 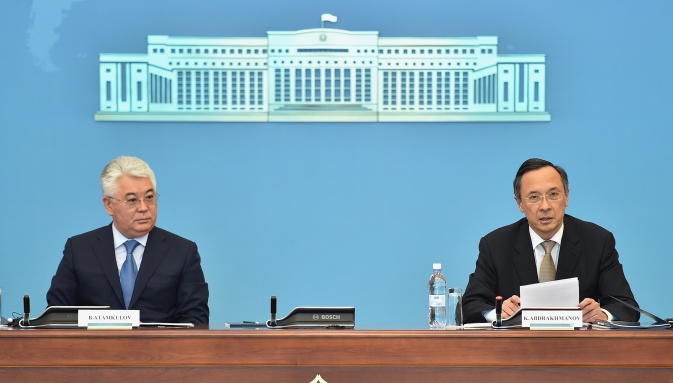 Abdrakhmanov noted that the government supports accelerated development of the manufacturing industry, including defence production.

“Kazakh companies are optimistic about the prospects for cooperation with foreign partners. We are opening new diplomatic opportunities for cooperation in the sphere of the military-industrial complex,” he stressed.

“Kazakhstan’s defence industrial complex has significant export potential. It occupies a certain niche in our country’s economy. The modern models of our military equipment have a high level of competitiveness. Kazakhstan has created a modern space infrastructure, satellite communication and remote sensing systems of the earth able to provide communication services and images of space monitoring of the earth’s surface,” Atamkulov informed.

According to Atamkulov, the main task of the ministry is to fulfil the needs of the local army and produce products for export.

“The ministry has bilateral ties with more than 20 countries, seven of which are our close partners. In multilateral format we are involved in six international organisations, including the United Nations, Organisation for Security and Co-operation in Europe (OSCE), Shanghai Cooperation Organisation (SCO), Conference on Interaction and Confidence-Building Measures in Asia (CICA), Collective Security Treaty Organisation (CSTO) and North Atlantic Treaty Organisation (NATO),” Atamkulov said.

“Today’s meeting is very important in terms of establishing future cooperation. We are open for the joint projects,” Atamkulov noted.

According to Deputy Chair of the national company Kazakhstan Engineering Vadim Shakshakbayev, the company’s factories are located across the territory of Kazakhstan, which facilitates transportation of products to the neighbouring countries. For example, there are factories close to the Chinese and Russian borders.

Kazakhstan Engineering is the only machine building company in Kazakhstan with the status of a national company. The defence industry complex is a priority sector of economic development of Kazakhstan, Shakshakbayev noted in his speech.

Within the framework of the meeting, a small exhibition was organised to demonstrate products of Kazakh aerospace industry to the foreign ambassadors and guests.