By Anuar Abdrakhmanov in Sports on 3 May 2017

ASTANA – The Kairat futsal club placed third in the 2016-2017 UEFA Cup’s Final Four, the third time the Almaty club has won bronze medals in the tournament.

The club previously claimed European futsal’s most prestigious trophy twice, in away finals in 2013 and 2015. The decisive UEFA Cup matches were held in Almaty this year and many assumed that with the local fans’ support, Kairat would win the tournament. That, however, was not the case. 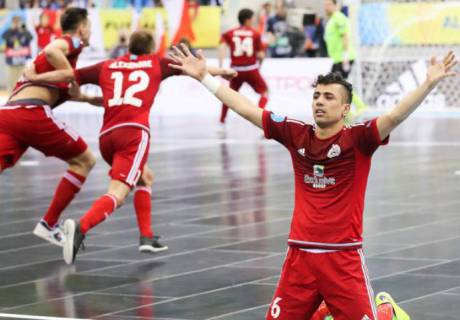 In the semifinal, Kairat competed against Inter Movistar of Spain. The Spanish club’s player Portuguese Ricardinho is considered the world’s main futsal star and currently the most-technically skilled player. Indeed, he became one of the match’s heroes.

The match had quite a lot of highlights and the teams showed the fans an exciting game. Kairat went ahead twice thanks to Cabreuva and Igor, but the visiting team levelled both times due to Ricardinho. Ninety seconds before the end of the second half, Inter’s captain Ortiz passed the ball, which hit Higuita’s head and went into the net. Kairat’s final attack failed to help the team. The Spanish club took a 3-2 win and went through to the final, where it competed against Sporting Lisbon.

“The guys got a bit exhausted at the end. Inter looked less tired. At the end of the second half, our guys started to lose focus. This was the reason why they missed the goal at the end of the match and eventually lost. It’s frustrating. Of course, Ricardinho’s personal skills came into play. He levelled the score, which affected the course of the game. However, at the score of 1-0 for our team, we had some scoring chances. We had to take them. If the score was 2-0, it would have been easier for us,” said Kairat team captain Dinmukhambet Suleimenov.

As a result, Kairat was relegated to playing for third place against Russia’s Gazprom-Yugra, which lost to Sporting in the other semi-final.

This match saw 10 goals scored. The Russian team scored the first three in a row, then Kairat twice missed a one-goal advantage. The winner was decided in the penalty shootout. Kairat’s goalkeeper saved the shot by Dmitry Lyskov and at the decisive moment, Douglas scored a goal, bringing the Almaty club a win and the bronze medal.

“I would like to thank our fans. Their support was so amazing that I wanted to become a player once again to feel it. Since we lost to Inter in the semis, it was very difficult this time. We looked better in the match against the Spanish club. In the match against Yugra, we started to play after the starting ten minutes. We were still worried after the Friday’s defeat and we were disappointed. I want to congratulate my players, who played like warriors and deserved the win,” said Kairat head coach Cacau.

In the decisive match, Inter easily defeated the Portuguese Sporting, scoring seven goals and missing nil. Ricardinho, who scored a brace, was recognised as the final tournament’s best player. The win was the fourth in the history of Inter’s participation in the UEFA Cup, the best result for all European teams.