ASTANA – A little less than two weeks are left before EXPO 2017 kicks off in the Kazakh capital and the whole country is anticipating the grand event. 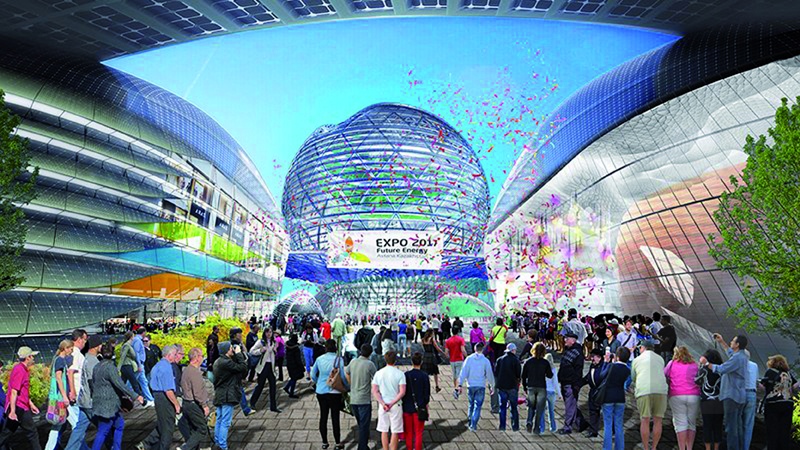 The exhibition area is almost ready, as the decorative works are being carried out – some parts of the exhibition look perfectly ready, while others are still being finished. For instance, the Mega Silk Way Mall has been open since April, while the concert stages in front of the EXPO’s famous sphere are nearing completion.

The 173-hectare EXPO area is not the only site under construction and renovation. The whole city is being reorganised and prepared for the grand event: the new railway station, additional terminal at the international airport, Abu Dhabi Plaza, the capital’s symbolic Baiterek Tower and left bank are all undergoing non-stop, day-in, day-out construction.

“We have never had anything of this scale happening in our country and we know that EXPO is quite famous in the world. We are very excited,” said Aidar Mukhamadiyev, 33, a Taraz resident who came to the capital with his family just for the event.

“As we stroll along the streets of the capital we can see many construction works are being carried out, which is great and a good job by the Akimat (city administration). We are glad to see how quickly things are improving in the city in wake of the EXPO opening,” he added.

The opening ceremony is scheduled for June 9 and, according to the organisers, the ceremony will include “grand parades and breathtaking theatrical shows with foreign and local stars and celebrities.” Kazakh National Arts University will present live music at Energy Hall with the participation of legendary Kazakh violinist Aiman Mussakhajayeva and Russian cellist Sergei Roldugin.

“We have already been to the EXPO site a few times, as we visited the Mega Silk Way Mall and saw that the quality of construction is at the highest level. We met Thai EXPO pavilion representatives and they showed us their country through 3D virtual reality glasses and I was impressed. They made us want to visit their country. They told us that everything is ready and they’re ready to show us the pavilion in June,” said Mukhamadiyev.

The organisers are expecting about five million visits in the span of three months during operations from June 10-Sept. 10. Approximately 85 percent of the visitors will be Kazakh residents while the remainder will be foreign citizens, mostly from the Commonwealth of Independent States (CIS) countries and China.

“At first we didn’t realise how big this event was, when we only heard about it on the news back home almost five years ago. I had mixed feelings about all this. But now I want to say it’s great to be a part of the history of our country,” Mukhamadiyev said proudly. “We can’t always afford to go abroad, for instance, as that’s too expensive, especially now when our currency lost so much [ground] against the foreign ones. So EXPO is a good chance when the countries come to our land and we can have a taste of their homes, their cultures and their colours. I am looking forward to the opening and hope everything is ready!”