By Zhanna Shayakhmetova in International on 26 May 2017

ASTANA – A model of a regional zone of peace, security and cooperation can be developed on the basis of a harmonious combination of the interests of all involved Central Asian countries, said Mazhilis (lower chamber of Parliament) Chairperson Nurlan Nigmatulin. He spoke on the role of parliaments in legislative support for cooperation and regional security at the May 25 international roundtable in the capital. 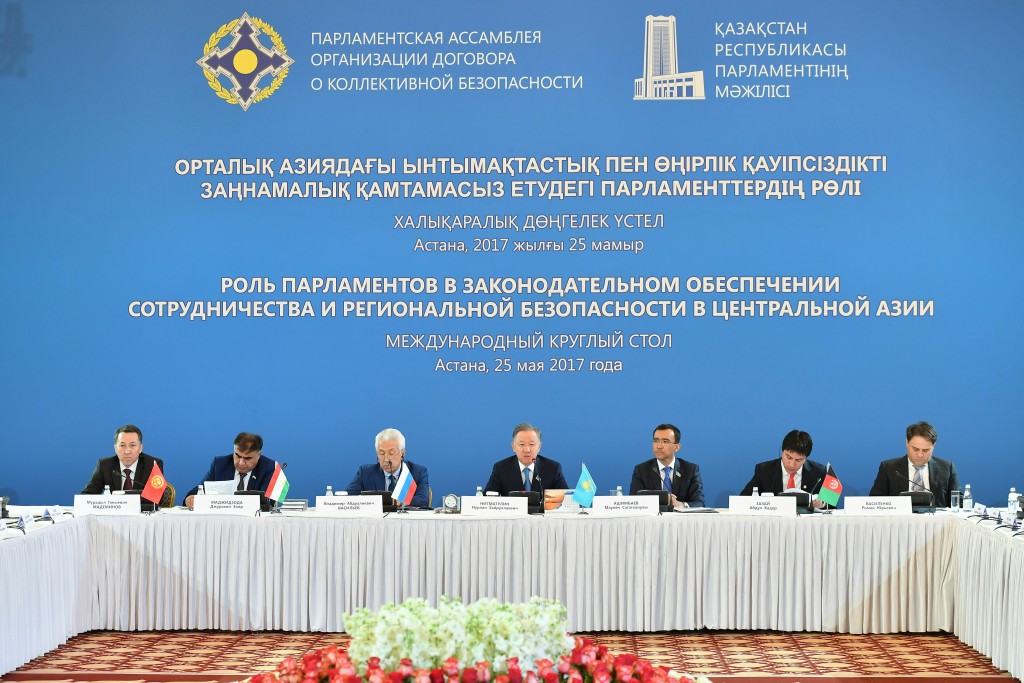 New ways to strengthen cooperation between the parliaments were outlined at the event. The representatives agreed to develop a legislative base for regional cooperation and spoke of the need to approve the signed agreements in parliaments expeditiously to ensure security in the region. The important role of CSTO PA inter-parliamentary cooperation and the cooperation of international organisation deputies was also specified. 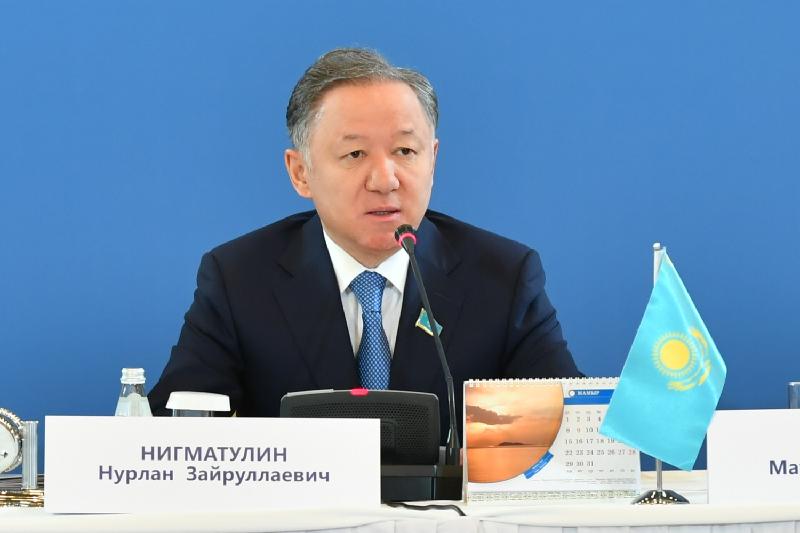 Nigmatulin said Central Asia is one of the main priorities of Kazakhstan’s activities as a non-permanent member of the United Nations Security Council. The country intends to actively work to promote the interests of all the states in the region in ensuring its stability and security, strengthening cooperation and promoting its growth and development.

“The situation in Afghanistan plays a special role in ensuring long-term stability and security for the countries of our region. It will be impossible to ensure long-term stability in the region without a solution to the Afghan issue, without the integration of this country into the regional process in Central Asia,” he said. 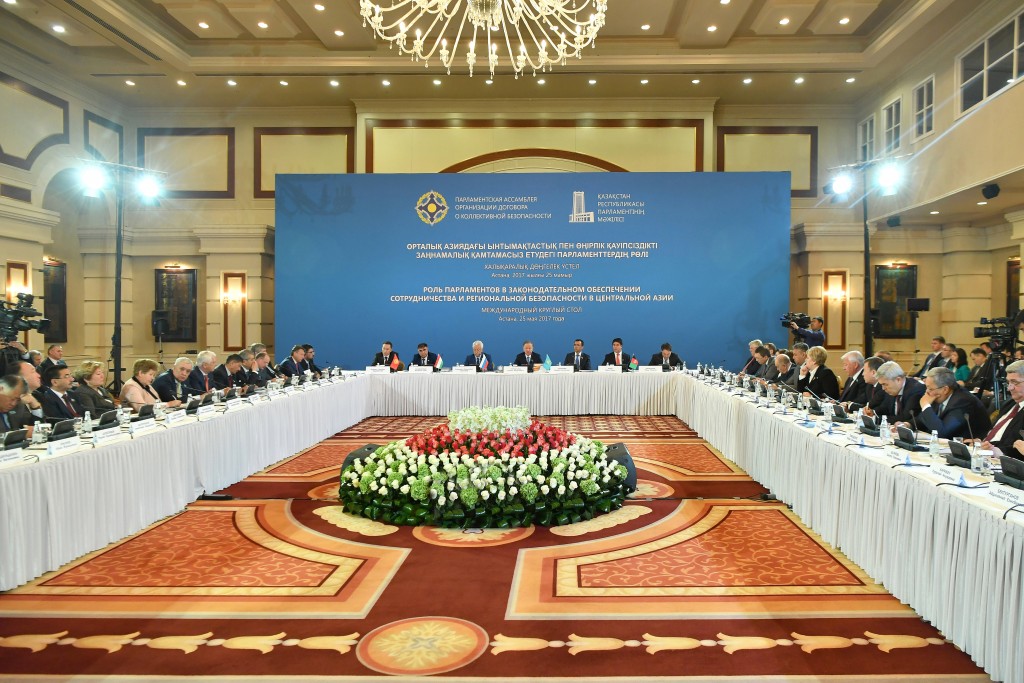 He emphasised the role of parliaments in solving the most important tasks in the mechanisms of ensuring national and international security. The Kazakh Parliament aims to provide legislative support for the regional and global security strategy set by President Nursultan Nazarbayev.

New global security challenges in the world and the Central Asian region require the special attention of CSTO country parliamentarians. Their cooperation allows providing legislative support for international processes, taking into account national interests and strengthening the independence and security of each country.

“We can achieve significant success in solving any problems only through close cooperation and collective efforts. This is especially important when the risks of strengthening crisis phenomena in our region still remain relevant. All current threats and challenges are of a transboundary nature; therefore, effective counteraction to these phenomena is impossible without close interaction with neighbouring countries and international partners,” said Nigmatulin.

The spread of religious extremism and terrorism, drug trafficking and illegal migration were named among the serious threats to the region’s security. These challenges and threats require “closer cooperation in consolidating the political and economic potential of the countries of the region to solve key problems and ensure stability in Central Asia,” he added.

Central Asia should not become a field of global rivalry, Kazakh Deputy Minister of Foreign Affairs Roman Vassilenko said in his remarks. The countries are able to prevent new geopolitical fault lines in the region.

“There is a need to work purposefully within the region and outside it to preserve and develop a constructive and neutral to international conflicts area, to build a favourable atmosphere in the region on the basis of the win-win approach and avoiding zero-sum games. We believe that the best way to ensure the long-term stability and sustainable development of Central Asia is to continue enhancing the regional dialogue that would help reduce social and economic problems, solve water-energy and other issues,” he said.

There have also been a string of visits between other Central Asian states.

“The positive trend of intraregional visits and intensification of the dialogue between our neighbours is of special importance,” said Vassilenko.

Transnational and organised crime as a manifestation of the new challenges and threats to regional and global security have become some of the main factors of deteriorating political and socio-economic stability in society, said Tajik Majlisi Namoyandagon Majlisi Oli committee on law, order, defence and security chairperson Jurakhon Majidzoda.

“Tajikistan consistently and aggressively advocates for collective efforts in the field of maintaining regional and global security and participates in the coalition against terrorism,” he said.

Majidzoda added there is a need for a coordinated international criminal and legal policy at the level of the CSTO Interparliamentary Assembly, Council of Heads of State, European Union and UN to combat international terrorism. Similarly, he spoke of the need to develop the legislative base to expand international and interstate cooperation between law enforcement bodies and a strategy to combat terrorism at the state level with legal norms and methodological actions.

Kyrgyz Zhogorku Kenesh (Supreme Council) Member of Budget and Finances Committee Muradyl Mademinov noted cooperation among the parliaments plays an important role and the meeting is a good platform to discuss topical issues.

“No country can fight against drug trafficking independently. We call for joint efforts to fight drug trafficking. Regional border guards, law enforcement agencies and drug control agencies need cooperation and coordination of actions. This cannot be provided without an appropriate regulatory framework,” he said.

Afghan Wolesi Jirga (National Assembly) member Abdul Qader Zazai noted countries have to stand together against the ideology and culture of terrorism and against those who sponsor and equip these groups.

“Tackling this issue is not complicated; it requires the political will and struggle of the regional states for bringing peace, stability and prosperity to the region and to all humanity. All these issues need collective measures and the request of a strong, interregional counterterrorism strategy,” he said.

Zazai proposed developing a strategy which should be collectively focused on combating terrorism, financing terrorism and drug trafficking.

“The strategy needs to be reflected at the national level and with relevant laws. The strategy may have long term planning along with international accountability. I request all to take concrete steps on these issues of regional security and cooperate. I request the honourable members of parliaments of various nations [present here] today to raise this issue of terrorism in your respective parliaments and academic institutions. Let’s work hard together to bring and keep security and stability in the whole region and to save our people and nation from terror attacks,” he said in an emotional speech.

“Kazakhstan now has very good security and it will be a good example for other countries to use this experience,” he added.

During the event, the CSTO parliamentarians, international experts and representatives of international organisations discussed issues of expanding relations and strengthening interparliamentary interaction.