ASTANA – The Astana Arlans boxing team defeated Russia’s Patriot Boxing Team in the first match of the World Series of Boxing (WSB) quarterfinals. The match took place in Kemerovo, Russia, and ended with a 3-2 score for team Kazakhstan. 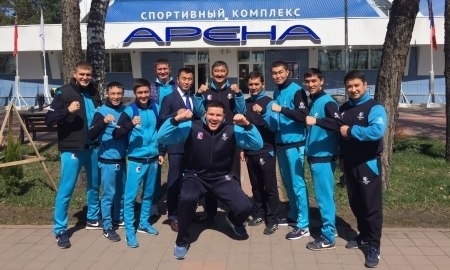 The match started poorly for the Arlans (“Wolves” in Kazakh). In the lightest weight category, 2013 Asian champion Temirtas Zhussupov lost to Russia’s Bator Sagaluev, 0-3. However, Ilyas Suleimenov at 56 kg drew the Arlans level with a victory over Maxim Chernyshev. The fight in the 64 kg category was particularly interesting and tense, as Dilmurat Mizhitov defeated Alexei Mazur, giving the visitors a lead. Saparbay Aidarov at 75 kg had a hard time beating Andrei Kovalchuk, but he brought Kazakhstan the win in the match. Fans still anticipated with interest the heavyweight bout, in which one of the Kazakh club’s leaders, Anton Pinchuk, took on  Russia’s Ilya Kvasnikov. The confrontation ended in a shocking upset, as Kvasnikov beat Pinchuk with a technical knockout in the second round, avenging his February defeat at the hands of the same Kazakh boxer. Despite the final defeat, the match ended in a 3-2 victory for the visitors.

“The opponents were well prepared for the match, and every fight was tough. All our boxers fought to the end and put every effort into winning their bouts. What happened to Anton Pinchuk is unfortunate, but it happens in boxing, when one sharp blow decides everything. We will explore our mistakes and try to correct them. The main thing is that we won the away match, which is never easy. Now we just need to finish what we started. I think that at home, with the support of our fans, we are capable of winning the second match too,” said Astana Arlans’ head coach Nurlan Akurpekov.

The return match of these teams in the current quarterfinals will be held in Karaganda May 20.

AIBA wholly owns WSB. All WSB boxers are registered with AIBA and all referees and officials working WSB matches are specifically certified for the competition. Franchises have a national identity and are formed by national federations. Teams are allowed a quota of overseas boxers: a maximum of eight in total and no more than three of the same nationality.

The Astana Arlans club was founded in 2010. In the very first season, the club’s boxers proved themselves as one of the strongest teams in the world. The team is a two-time WSB champion. It won the third season in 2012-2013 and the fifth season in 2014 -2015. With two titles apiece, Arlans and Cuba’s Domadores lead the league in titles won.