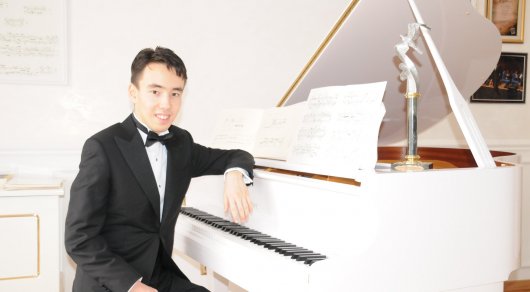 Abdysagin became a student at the Kurmangazy Kazakh National Conservatory at 13, while simultaneously studying piano under maestro Konstantin Bogino at Accademia Musicale S. Cecilia di Bergamo in Italy. After graduating from both schools four years later, he entered KazNUA. He then brilliantly defended his master’s thesis, receiving the maximum score of 100. Abdysagin, who began writing music at age 10, is the author of more than 100 pieces, including large-scale symphonic and chamber works.

“I have been doing things I love. I did not hurry to defend my master’s thesis; it all happened naturally. I focused on research in the field of modern art and contemporary classical music in my work. My master’s thesis offers many new approaches and new methods of analysis of the latest music, introducing new concepts in music and analysing a huge number of contemporary composition techniques. The commission recommended publishing it in the form of a monograph as a completed stage of scientific research,” he said.

While a student at KazNUA, the young talent held several concerts at home and abroad. In addition, he was awarded with an honorary badge “For merits in development of culture and art” by the Commonwealth of Independent States (CIS) Interparliamentary Assembly. 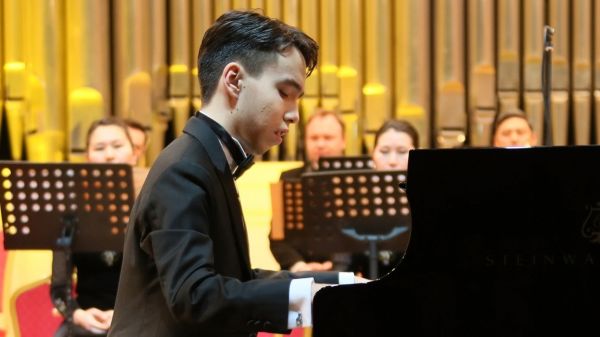 “As it is known, time is relative; everything depends on the natural pace of each individual person. For example, Mozart wrote his first work at the age of five, Czerny started performing concerts from 10 years and Mendelssohn acted as a pianist when he was nine. … There are similar examples in modern times; for example, Alma Deutscher wrote her first work at the age of six, now she is 11 years old. Alan Walker created his first electronic composition at 15 years old,” said Abdysagin.

“The fact that I started composing symphonic music from the age of 10 and at the age of 18 I defended my master’s thesis is my current of time. I am not ahead of anyone; I have my own time in my own coordinate system. How it relates to others is a rhetorical question,” he added.

“Modern methods of playing the instruments become bearers of the artistic image. Compositional techniques and form create a single whole with content in the general breathing of time. Reliance on the eternal and unshakable values of art is the point of attraction. … The spectrum of his work is wide, encompassing many genres, styles and directions,” he said.