By Anuar Abdrakhmanov in Sports on 19 April 2017

ASTANA – Kazakhstan’s national futsal team made it through the April 8 and 11 qualifying round of the European Championship in Almaty. 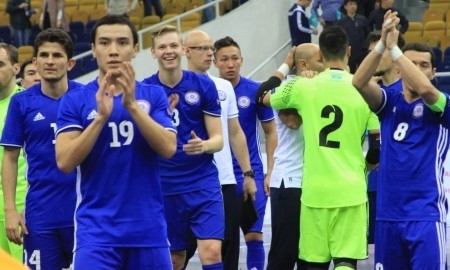 Team Kazakhstan competed in the Almaty Arena Stadium against teams from Denmark, Czechia and Macedonia to secure a berth in the championship of the continent branded UEFA Euro Futsal.

Team Kazakhstan, the previous European Championship’s bronze medallist, was a favourite in this quartet. However, at the press conference preceding the tournament, the team coach made it clear his team should not underestimate the opponents.
“We have a very interesting group. Look at the teams that got here, there are no obvious outsiders. All of them can claim first or second place. I do not think the team of Kazakhstan is the favourite of the group. Every match will be difficult for us,” said Kazakh national team head coach Jose Alesio.

The tournament kicked off with a Kazakhstan versus Macedonia match. The two teams started off slow, but soon Leo of the Kazakh team stepped up. First, Leo, considered one of team Kazakhstan’s leaders caught the Macedonian goalkeeper off guard by a near corner goal after a throw-in. Then, this Kazakh player who plays for Sporting, in a quick counter-attack, brought the ball to the almost empty net in front of Serik Zhamankulov, who just had to do anything but miss. The final 3-0 score for the national team of Kazakhstan was earned by Albert Akbalikov in the 33rd minute.

In the next match, Kazakhstan competed against team Denmark. A lot was clear in this match by the end of the first half as well. By this time, the home team were leading 4-0, and after the break they secured the win. Dinmukhambet Suleimenov also got a chance to distinguish himself in the last seconds, making the final score 5-0. The team’s goalkeeper Igita also made several spectacular saves during the second half, after which the audience chanted his name for a long time.

The final game was played between Kazakhstan and the Czech Republic, which, like Kazakhstan, had two wins from the first two games at the tournament. Thus, this match determined which team would take first place in Group F and get through to the European Championship, and which one would have to compete in the play-offs to get to the Championship.

Kazakh players, supported by the fans, took a confident win. As early as the first half, the well-placed shots by Mikhail Pershin and Douglas brought the home team to the top. The Czechs made more attacks in the second half, but the goalkeeper of Kazakhstan’s national team played well. During the last minutes of the match, Douglas, taking advantage of the Czech team’s mistake, tackled the ball and hit the empty net. Thus, he secured the score 3-0 for the national team of Kazakhstan.

“We knew the match would be very tough, so we prepared hard for it. Any team wants to show their best play. I would like to praise my players for their professionalism. The guys analysed the tactics of the opponents all day, and I’m doubly pleased. We did an excellent job. I would also like to thank our fans for the great atmosphere, for their support to the team in every match,” said Alesio.

For the second time in its history, team Kazakhstan will take part in the Europe’s main tournament. The tournament will include 12 teams and will be played Jan. 30 to Feb. 10, 2018 in the capital of Slovenia, Ljubljana.