By Malika Orazgaliyeva in Central Asia, International on 20 April 2017 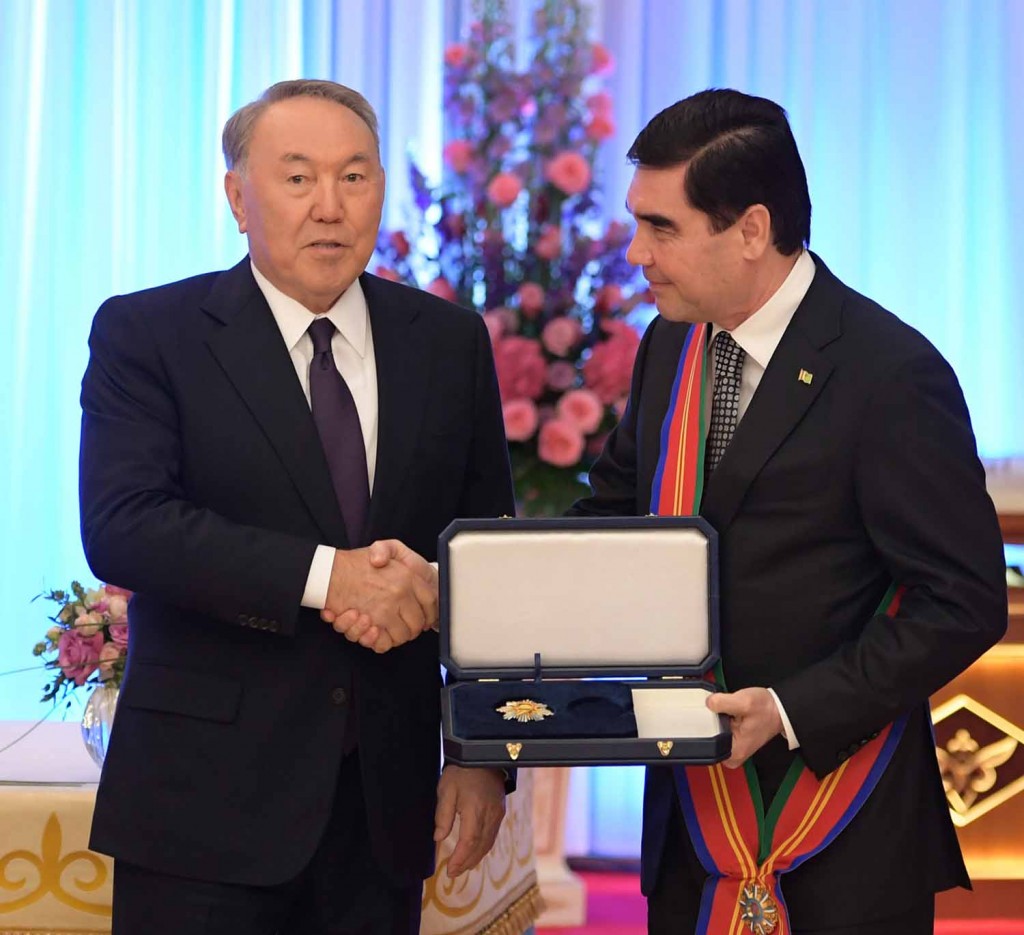 During their meeting at the Akorda presidential residence on April 18, Nazarbayev congratulated Berdymukhamedov on his victory in the recent presidential election in Turkmenistan.

“We highly appreciate your decision to pay one of your first visits after the election to our country. Kazakh and Turkmen people are bound by ties of partnership, neighbourhood and fraternity. For a quarter of a century, our relations have been developing on a foundation of mutual trust and support. Turkmenistan is an important partner and ally of Kazakhstan in the region. Our peoples are brothers and good neighbours to each other,” said Nazarbayev.

Nazarbayev noted the development of bilateral cooperation in energy, transit and transport spheres. He also underlined existing prospects in other areas of collaboration.

“Today we are signing the most important agreement concerning the strategic partnership between Kazakhstan and Turkmenistan. This agreement will serve as a basis for further effective cooperation between our countries. We are solving all border issues. We will be the only two countries [in Central Asia] that do not have any border issues remaining unresolved,” he said. [As things stand now, Kazakhstan have signed agreements on border delimitation with all of its five neighbours, Russia, China, Kyrgyzstan, Uzbekistan and Turkmenistan, and it has now signed agreements on border demarcation with China and Turkmenistan.]

Berdymukhamedov noted that his visit to Kazakhstan is going to strengthen cooperation.

The two presidents discussed issues of regional and international cooperation, as well as collaboration in cultural, humanitarian and social spheres. According to Berdymukhamedov, the two states are gaining a good reputation in the international arena. They defined their positions on peace, stability and security in the framework of the UN and the Organisation for Security and Cooperation in Europe (OSCE), he noted.

Nazarbayev said the Intergovernmental Commission on Economic Cooperation under the chairmanship of the two countries’ deputy prime ministers will play a special role in achieving the key tasks of bilateral cooperation.

During the talks, the parties paid attention to ways to improve the legal framework for cooperation and how to attract businesses to large joint infrastructure projects.

“The launch of the Kazakhstan-Turkmenistan-Iran railway is a historic event in the field of transit and transport cooperation. Kazakh and Turkmen entrepreneurs should use this advantage to strengthen mutual trade turnover,” Nazarbayev stressed.

According to Nazarbayev, water and energy issues, as well as activation of the International Fund for Saving the Aral Sea, were a separate topic of discussion.

“We once again confirmed that the water resources of the trans-boundary rivers of Central Asia are a common asset. The fate of millions of people depends on their reasonable use. This year, Turkmenistan chairs the International Fund for Saving the Aral Sea,” he said.

Following the visit, Nazarbayev awarded Berdymukhamedov the highest award for foreign leaders, the Order of Dostyk (Friendship) of first degree, for his contribution to securing friendship and understanding between the two countries.

Following the official part at the Akorda, Berdymukhamedov personally presented three of his books devoted to the Turkmen breed of horses, the Akhalteke, issued in the Kazakh language for the first time, Kazinform reported.

President of the Kazakh National Olympic Committee Timur Kulibayev initiated the production of these books in Kazakh.

“I am doubly pleased because the presentation of my books coincides with my state visit to your beautiful country. We have been good neighbours and brothers over the centuries. … Our peoples highly honour racehorses and treat them as family members. We have this in common. There is a saying ‘Waking up in the morning, greet your father and then your horse’,” Berdymukhamedov said.

In addition, the Turkmen leader was given a tour of the Kazakh National Museum.