By Aigerim Seisembayeva in International on 8 April 2017

ASTANA – The most difficult times call for greatest efforts and also the greatest of compromises, Kazakhstan’s ambassador to the United Nations Kairat Umarov said April 7 at the extraordinary UN Securiy Council consultations on the situation in Syria. That is why Kazakhstan, with an ever stronger impetus, calls on all parties concerned to refrain from actions that could increase risks of military escalation in Syria. 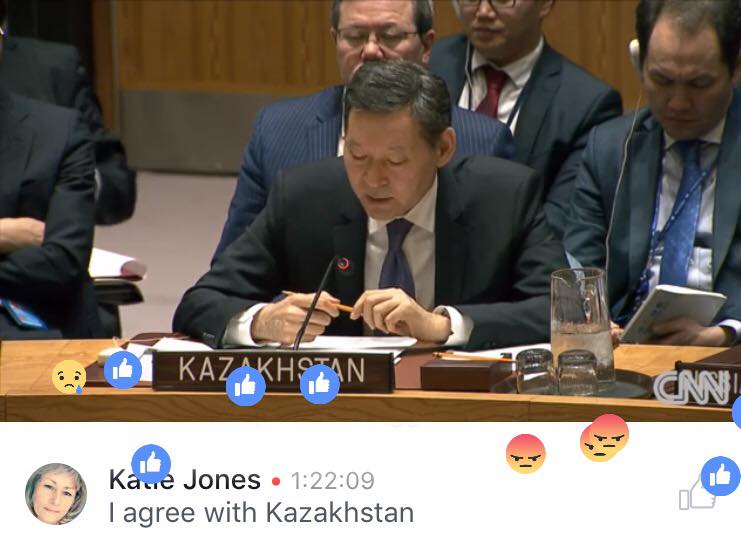 “My delegation is gravely concerned by recent developments and absence of unity of the Council Members on the chemical track in Syria,” he said.

Bringing Kazakhstan’s observations and recommendations on the critical political aspect of the situation in Syria, Umarov emphasised that the lack of unanimity may eliminate hopes of the Syrian people which arouse from the historical resolution 2336.

“We should not undermine an inclusive political negotiating process, as provided for in resolution 2254. Geneva-5, held from 23 to 31 March, was able this time to move from discussing formal and procedural issues to the substantive and political aspects of future peace talks. In this regard, we simply cannot allow ceasefire to dissolve as our last chance to realise the long-awaited peace to the Syrian land,” he emphasised.

Astana considers the April 4 gas attack in Syria as a crime against humanity, condemns the use of chemical weapons and stresses the importance of having a thorough, objective, strong and impartial investigation into all aspects of the chemical attack on Khan Sheikhun, Umarov said. This will allow the international community to make a fair verdict against the perpetrators in full compliance with international law.

“We would like to remind that the principal position of Kazakhstan is not only the most severe condemnation of the use of WMD by any party, especially against the civilian population, but also the resolution of conflicts exclusively by peaceful means,” Umarov stated.

He also noted that the parties have to respect the sovereignty of member states of the UN and the principles enshrined in the UN Charter. Nevertheless, he underlined the urgent need of a political solution to the conflict.

“Only political-diplomatic solution can bring peace in Syria and we call on international community to exert political will to overcome differences and negotiate peace in Syria,” he said.

Astana insists that the legitimate authorities of the Syrian Arab Republic as well as other parties must thoroughly execute their obligations of complying with the relevant recommendations by the Organisation for the Prohibition of Chemical Weapons (OPCW) and the UN. This should be done by accepting personnel designated by them, while providing for and ensuring the security of activities undertaken by these personnel, by providing these personnel with immediate and unfettered access to and the right to inspect, in discharging their functions, any and all sites, and by allowing immediate and unfettered access to individuals that the OPCW has grounds to believe to be of importance for the purpose of its mandate.

“The crisis in Syria that is still unfolding has its impact not only on the region, but the entire international community. Kazakhstan, therefore, believes that the regional approach, involving neighbouring countries which have influence on parties in Syria conflict should be considered a very effective method in mitigating the situation and preventing further deterioration,” Umarov said.

According to him, there is a strong need to continue supporting the aims of the Astana talks and further Geneva negotiations, and of the three guarantors, in order to see positive outcomes.

Concluding his speech, he noted the Kazakh side welcomes significant results of the recent ministerial-level conference held in Brussels, which was chaired by the EU and the UN and attended by many IGOs and NGOs.

“It is encouraging with the pledges made and sending a message of solidarity to the people of Syria, and all those impacted by the conflict. The meeting will increase the amount of the much-needed essential humanitarian assistance provided to the Syrian people, which is most important for achieving our political objectives,” he stressed.