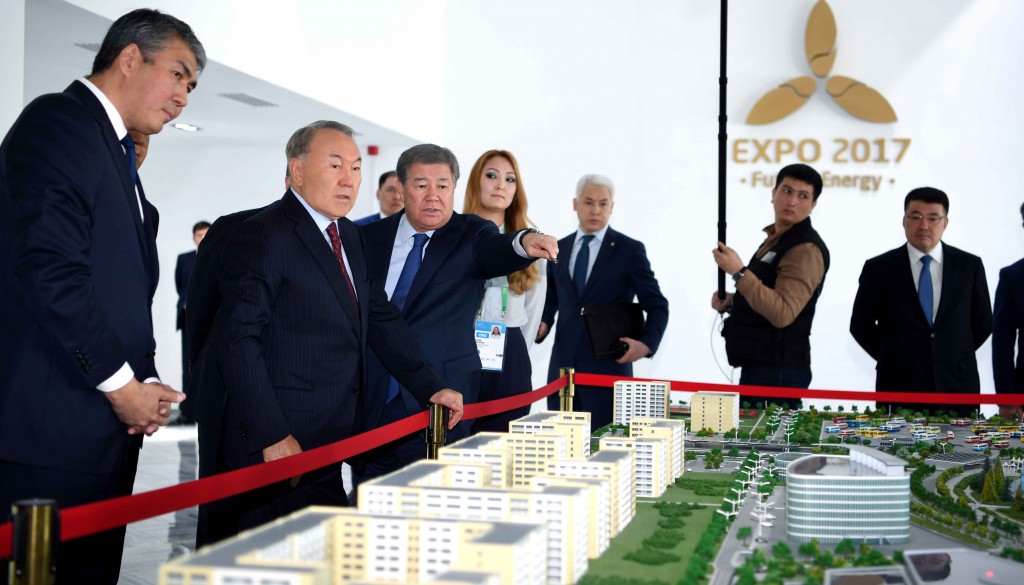 “Official opening of the exhibition will take place on June 9. The readiness of EXPO 2017 is at a final stage. The excellent holding of the exhibition will demonstrate to the world the community achievements of an independent Kazakhstan,” said Nazarbayev at the meeting on socio-economic development of Astana and preparation for the exhibition attended by Astana Akim (Mayor) Asset Issekeshev, Chairperson  of the Astana EXPO 2017 national company Akhmetzhan Yessimov, Kazakh Minister of Energy Kanat Bozumbayev and Minister of Internal Affairs Kalmykhanbet Kassymov, among others.

The President emphasised that Astana should become one of the best cities in the world, convenient and comfortable for living. In this regard, Nazarbayev gave instructions to further develop the capital.

According to his instructions, the International Technopark of IT startups will be launched on the expo site. Nazarbayev also instructed to develop the city following the example of Dubai, Hong Kong and Singapore and to create on its base a financial and business hub on the scale of the Eurasian space.

“There are 2,700 foreign companies working in Astana. They invested about 3.2 billion US dollars in the city’s economy. At the same time, the existing opportunities are not fully used. The potential of the special economic zone of Astana is involved weakly. The further development of the capital must take into account the urbanisation processes. By 2030, its population may grow by another one million people. This puts the city’s task of ensuring productive employment through the creation of new permanent jobs,” Nazarbayev said.

The President also pointed out that Astana has a significant potential to become a tourist centre and instructed the government together with mayors to develop the capital’s tourism. Nazarbayev also emphasised the need to create roadside services for tourists who arrive by car.

The head of state also focused on the preparation process of cultural and mass events in the days of the exhibition, the safety of guests and residents of the capital and the level of preparedness of volunteers to meet visitors.