By Malika Orazgaliyeva in Central Asia, International on 6 April 2017 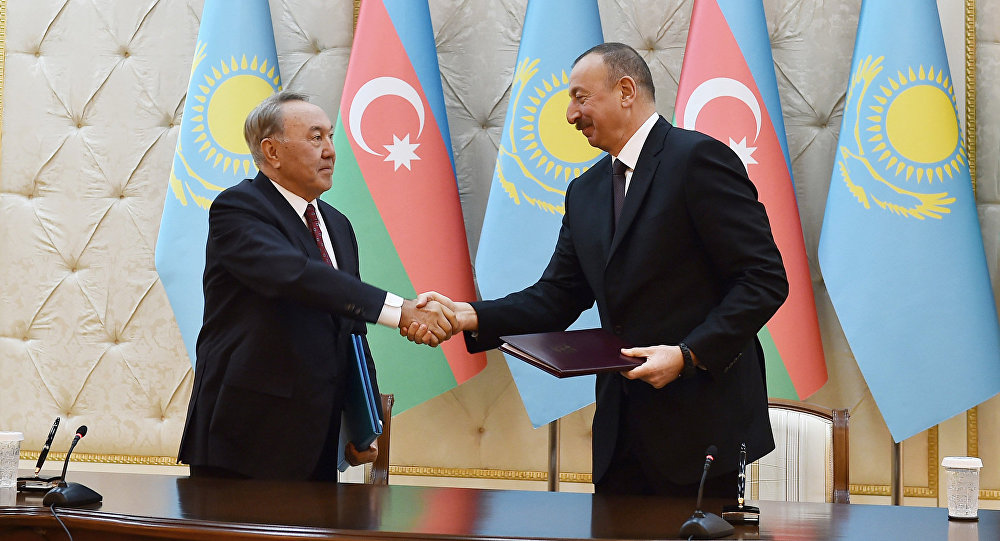 Nazarbayev said the two countries should seek new, joint economic opportunities resulting from the global economic crisis, including in transit and transportation.

“We see that the ongoing crisis in the world is causing serious damage to national economies. At the same time, it allows us to use hidden opportunities and create new joint ventures. We should pay attention to innovative technologies on the way to economy diversification,” he said. “Economics is the basis of any state. Arrangements in various sectors, particularly in the transport and communication spheres promise great opportunities for our states.”

“There is a railway road built in Kazakhstan from the Chinese border to the Caspian Sea with a length of about 2,000 kilometres, as well as the Western Europe –Western China highway, which brings its results. At the moment, a question arose concerning sending goods from China to Europe through the Caucasus and the Caspian Sea. Thus, there is a huge potential for Azerbaijan,” Nazarbayev continued. “Kazakhstan is ready to supply metallurgical products to Azerbaijan, such as already exported locomotives. For example, the volume of imported vegetables from Azerbaijan increased 12 times in one year. Coordinated actions will help us to increase trade turnover up to $500 million in the near future.”

Nazarbayev underlined that documents signed at the meeting should boost economic cooperation, including cooperation agreements on quarantine and plant protection, international automobile travel and a protocol on making amendments to the intergovernmental convention on the prevention of double taxation of income and property. The countries’ foreign ministries also signed a 2017-2018 cooperation programme.

“Trade is one of the main cores of our relationship. It provides opportunities to develop other areas of interaction. Today’s meeting has revealed the need to increase trade turnover, because the existing volume of $140 million does not meet our interests,” said Nazarbayev.

According to Nazarbayev, the two countries are important players in the world energy market.

“We are interested in ensuring uninterrupted delivery of oil and oil products to world markets, including through the territory of Azerbaijan. When launching large projects in Kazakhstan, we try to create conditions for localisation of production of equipment or other products,” Nazarbayev said.

Nazarbayev also noted the countries’ similar position on international issues and the importance of cultural cooperation.

“It is necessary to pay attention to the issues of student exchange and holding days of cultures in both countries. This will raise our cultural and humanitarian ties to a new level,” he said.

Nazarbayev also thanked the Azerbaijani President for awarding him the Order of Heydar Aliyev, the country’s highest award, for Nazarbayev’s contributions to developing relations.

“This meeting should serve as a new impetus for launching a new format of our relations that will allow us to more closely develop two-sided cooperation,” he said. “A large number of ethnic Azerbaijanis – citizens of Kazakhstan – live in our country. When those people create their businesses, they act as a bridge between the two states and strengthen our friendly relations.” According to statistics, shared by the Kazakh President, there are 130,000 ethnic Azerbaijanis living in Kazakhstan today.

Aliyev noted the importance of the Kazakh President’s visit and the signing of new agreements to deepening relations.

Aliyev praised Nazarbayev for his leadership of Kazakhstan and said Kazakhstan’s recent election as a non-permanent member of the UN Security Council indicates the country’s growing international role.

“Your regional and worldwide initiatives deserve great respect. We express satisfaction with the development of our bilateral relations. Today’s constructive exchange of views shows the similarity of positions on many issues,” he noted.

Following the visit, Nazarbayev laid flowers to the Eternal Fire memorial at the Shahid Alley devoted to Azerbaijani soldiers who were killed for the sake of the country’s freedom and territorial integrity. Nazarbayev also laid a wreath at the grave of National Leader of Azerbaijan Heydar Aliyev and his wife Zarifa Aliyeva.