By Aigerim Seisembayeva in Business on 8 April 2017

ASTANA – Prospects for cooperation in the agro-industrial sector were presented to the diplomatic corps in Astana at a joint briefing hosted by Kazakhstan’s Ministry of Foreign Affairs and the Ministry of Agriculture on April 5. The newly adopted State Programme of Agro-industrial Development was also presented. 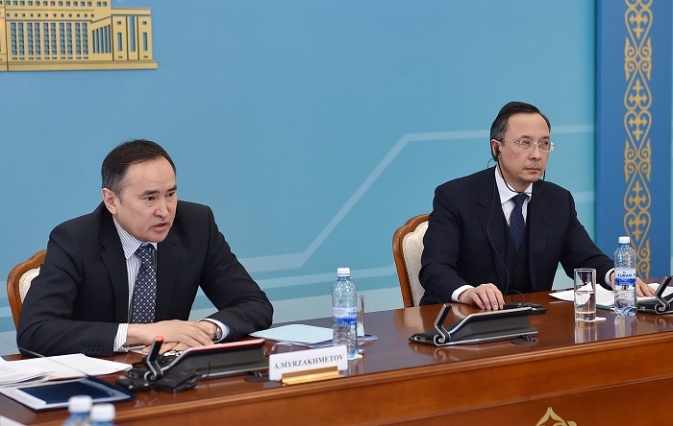 Deputy Prime Minister and Minister of Agriculture Askar Myrzakhmetov as well as Foreign Minister Kairat Abdrakhmanov held a joint briefing for representatives of the diplomatic corps accredited in Kazakhstan and international business associations.

In his opening remarks, Abdrakhmanov spoke about the Joint Action Plan signed between the Ministry of Agriculture and the Ministry of Foreign Affairs, which seeks to coordinate and combine the activities of the two agencies in the investment and export spheres of the agro-industrial complex. The minister also noted that, given new global realities, Kazakhstan is prioritising the accelerated development of the agro-industrial sector.

“Another significant area of the Ministry of Foreign Affairs’ activities in agriculture is the exchange of knowledge and experience. For example, in late April, Kazakhstan will host seminars on drip irrigation, which will be attended by representatives of neighbouring countries, as well as Kazakh and international experts,” he said.

In his speech, Myrzakhmetov called on foreign diplomats and representatives of the international business community to take active part in the successful implementation of the new programme. He stressed that Kazakhstan has all the prerequisites to become one of the world’s largest producers of organic food and a real bread basket of Eurasia. In his state of the nation address, “Third Modernization of Kazakhstan: Global Competitiveness,” President of Kazakhstan Nursultan Nazarbayev tasked the government with developing the agricultural sector as a new driver of the country’s economic growth. The 100 concrete steps plan to implement Kazakhstan’s five institutional reforms project also provides targeted measures for the development of agriculture.

Myrzakhmetov stressed the importance of the strategic documents being implemented, which provide Kazakhstan with an opportunity to develop and strengthen business cooperation with foreign countries.

Vice Minister of Agriculture Gulmira Issayeva presented the new Agro-industrial Development State Programme for 2017-2021 that was adopted Feb. 14, 2017. She outlined the main goal of the programme: increasing the volume of agricultural production and exporting popular and competitive agricultural products that are in demand.

She also talked about eight tasks for implementing this programme, including involving small and medium-sized farms in agricultural cooperation, saturating the domestic market and developing the export potential of domestic products, making effective use of financial measures of state support and other steps.

Issayeva also touched upon measures under the programme that provide for a better investment climate in the agricultural industry. Among others, she named the law “On foreign investments,” which provides a wide variety of benefits to investors, among them the standardisation of public services, target and preferential lending, tax incentives and subsidies. All of these are aimed at attracting more investment and therefore helping develop the agricultural industry of Kazakhstan.