French Film Festival to be held in Astana and Almaty

The eighth French Cinema Today film festival, which traditionally presents the audience with the best novelties of French cinema, will be held April 22-25 in Kazakhstan. The festival will be presented for the first time in two cities, Astana and Almaty. 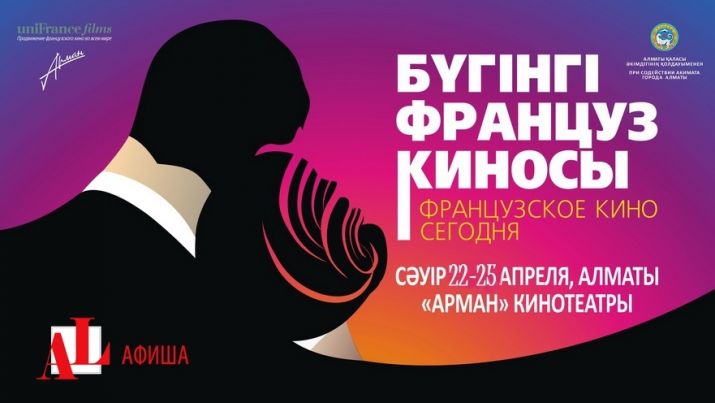 The programme will include films of various genres: adventure, biopics, comedies with Pierre Richard and Christian Clavier, a melodrama with Catherine Deneuve and the Oscar nominated animated movie “Life of a Marrow.” The audience will also see 15 short films.

“Dalida,” a biography directed by Lisa Azuelos, recounts the life of the singer and actress from her birth in 1933 until her tragic passing in 1987 in Cairo.

“In the Forests of Siberia,” an adventure directed by Safi Nebbu, is about a hero named Teddy, who was always attracted by freedom and decided to live away from a noisy world in a lonely hut near the ice-bound banks of Baikal Lake. One night, lost in a snowstorm, he is saved by Alexei, who has been hiding from authorities in the Siberian forests for many years.

The comedy “If I Were a Man,” directed by Audrey Dana, wonders who has not tried to imagine oneself, at least for a day, in the shoes of the opposite sex. It happened to Jeanne and her story is about hot and wildly funny situations, panic and deep meditation. The heroine will try to somehow get out of this very unconventional situation.

“My Life as a Zucchini,” an animated film directed by Claude Barras, tells the story of a nice boy who feels terribly lonely after his mother’s death. Zucchini still does not know what to expect from life in the orphanage. When you are 10, there is still so much to learn and experience, especially if you have good friends, are in love and may be even be happy.

The comedy “Mr. Stein Goes Online,” was directed by Stéphane Robelin. Pierre is widowed, retired and now with the help of Alex, a young man hired by his daughter, discovers the Internet. A young woman with whom he communicates on a dating site asks him on a date. All is great, except he used Alex’s photo for the profile picture.

“I and You,” a melodrama directed by Maarten Provo, is the story of Claire, the embodiment of honesty and integrity. She is an obstetrician and her whole life has been serving people. The threat of the maternity hospital closing is very troubling to her. Everything really collapses, however, when Beatrice invades her life. The eccentric woman, her father’s former mistress, is selfish and the exact opposite of Claire.

The opening ceremony in Almaty and the closing one in Astana, as well as the screenings, will take place as usual at the Arman Cinemas, the main venue of the festival organised by UniFrance and its partners, the French Embassy in Kazakhstan and the Alliance Française.