By Anuar Abdrakhmanov in Sports on 25 April 2017

ASTANA – The Astana Arlans team of Kazakhstan earned a hard-fought 3-2 win over the China Dragons in the final match of the World Series of Boxing (WSB) group stage. 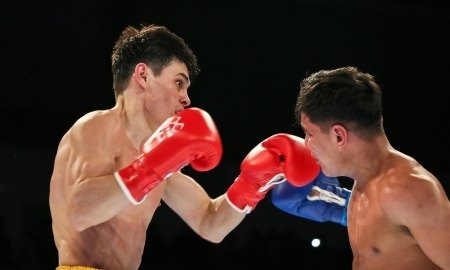 The match, contested in China, started poorly for the Arlans. Anvar Muzaparov of the 52 kg category lost to Chinese boxer Guo Zhang. Then Zakir Safiullin levelled the score. The 2015 Asian championship’s silver medallist turned out to be stronger than China’s Sen Wang.

However, the home team took the lead in the next bout. One of last season’s best boxers Aslanbek Shymbergenov failed to defeat Richabige Hurichabilige.

In the two remaining fights, Kazakh boxers showed grit and clinched a victory. First, Arman Rysbek won over Lida Wang, knocking him out in the first round. In the super heavy category, current champion of Kazakhstan Olzhas Bukayev defeated Zhibao Wang by a technical knockout in the fourth round.

Thus, with five wins from six matches, the Astana Arlans claimed first place in Group C and went through to the playoffs.

WSB is wholly owned by the AIBA. All WSB boxers are also registered with AIBA and all referees and officials working WSB matches are specifically certified for the competition. Franchises have a national identity and are formed by national federations. Teams are allowed a quota of overseas boxers: a maximum of eight in total and no more than three of the same nationality.

Teams representing franchises across the globe compete in a league format leading to playoffs and a final. The boxers compete in five three-minute rounds and five bouts per match.

The Astana Arlans club was founded in 2010. In the very first season the club’s boxers proved themselves as one of the strongest teams in the world. The team is a two-time WSB champion. It won the third season in 2012-2013 and the fifth season in 2014 -2015.