By Malika Orazgaliyeva in International on 28 March 2017 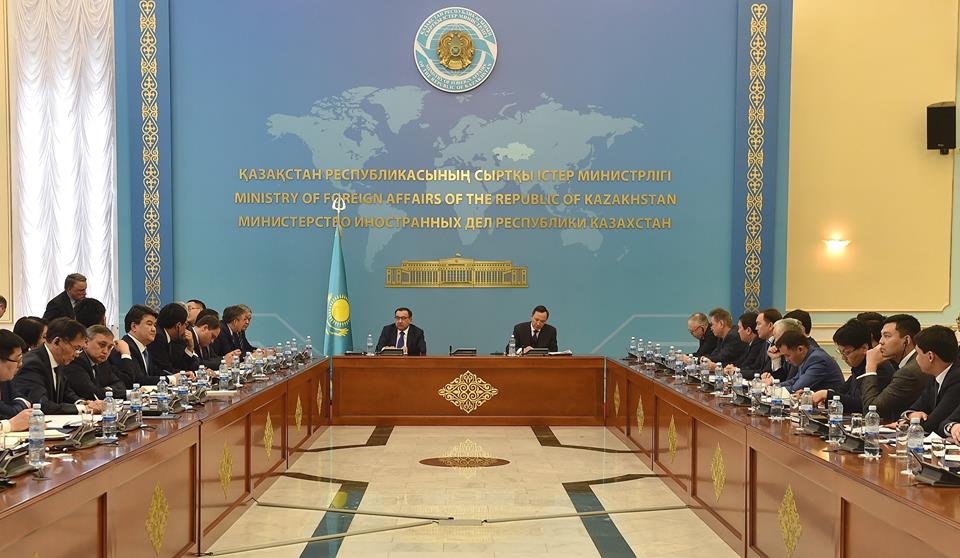 “Strengthening of economic diplomacy is the principal task of the whole system of the foreign ministry and its missions abroad. An important practical step was the signing of a joint plan on promotion of Kazakhstan’s export, with an already indicated list of commodity items, targeted countries and work on the presentation of local products abroad, which was signed by me and the minister for investment and development. Now, we are preparing for the signing of a similar joint plan to attract investment,” he told the gathering, which included representatives of the Presidential Administration, the Prime Minister’s Office, Parliament, heads of other government bodies and executives from national companies.

The meeting was also briefed on the ministry’s 2016 economic diplomacy efforts. The group was updated on joint efforts with the government’s economic ministries to establish mechanisms for interaction with other countries in investment and export, as well as about the activities of 115 intergovernmental commissions and 24 business councils with other countries. These efforts included preparing and implementing agreements between Kazakh and foreign business communities, as well as cooperating with the Organisation for Economic Cooperation and Development (OECD). The discussion also touched upon continued efforts to establish the national system of official development assistance (ODA).

Last year, the Kazakh MFA and its missions abroad helped organise more than 300 trade, economic and investment events and about 600 visits of foreign delegations to Kazakhstan and Kazakh economic delegations to foreign countries, according to information presented at the meeting.

These efforts helped increase foreign direct investment 27.3 percent in the first nine months of 2016 compared to the same period in 2015.

Since 2005, the country has attracted more than $236 billion in foreign direct investment, mostly, as a result of the personal efforts of President Nursultan Nazarbayev and agreements reached at the highest levels, said Abdrakhmanov.

“Currently we have to implement the existing agreements, memorandums of understanding and contracts, as well as significantly expand the geography of export of Kazakh goods and ensure a steady flow of foreign direct investment in the framework, for example, of economy diversification and implementation of the industrialisation programme. In this regard, holding EXPO 2017 in Astana opens significant opportunities,” Abdrakhmanov emphasised.

He also discussed improving human resource management (HRM) based on principles of meritocracy, scheduled external rotation and increased training for Kazakh diplomats. The minister also stressed the need to increase professional requirements for diplomats and applicants for the diplomatic service and to adhere to human resource laws and Kazakhstan’s Ethical Code for civil servants.

These measures would be taken to implement the first institutional reform aimed at creating a more professional state apparatus.

“Successful implementation of Kazakhstan’s foreign policy crucially depends on the employees’ level of skills and their professional readiness,” Abdrakhmanov said.

“The principle of meritocracy should be the main pattern of HRM. It is necessary to conduct planned and systematic work with the diplomatic service employees.”