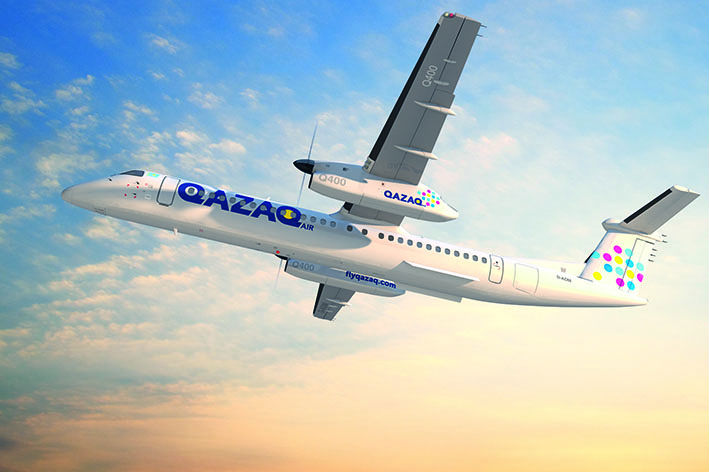 “Shymkent is one of the most densely populated and, at the same time, economically developed cities of the country. Since the establishment of the company in 2015, Qazaq Air has connected the citizens of this sunny region with the cities of Almaty, Aktobe and Atyrau. Now we are pleased to inform about the possibility of traveling from Shymkent to the capital of Kazakhstan. Thus, Shymkent becomes a kind of hub for the airline,” Qazaq Air Chief Executive Officer Blair Treherne Pollock said.

Flights from the regional centre of the South Kazakhstan region will operate twice a week on the modern airliner Bombardier Q400NextGen.

Ticket costs for a flight from Shymkent to Astana lasting one hour 55 minutes start from 11,557 tenge (US$36.6) one way, including airport passenger charges.

According to the company’s website, Qazaq Air is a new domestic regional airline in Kazakhstan founded by the Samruk Kazyna Sovereign Wealth Fund owning 100 percent of shares of the airline. The company was registered in April 2015. Qazaq Air meets local and international safety requirements and operates modern turboprop aircraft.

The airline logo was developed on the basis of the theme “Connecting Kazakhstan” and the network of regional flights. The logo’s 14 colourful circles represent the 14 regions of Kazakhstan.

“During the first year of operation, the airline carried more than 160,000 passengers between 12 cities of the country using three aircraft. During 2017 and 2018, it is planned to increase the fleet of the carrier by two aircraft. According to the business plan, in 2019 it is supposed to reach the target capacity of 450,000 passengers per year,” Managing Director on Asset Optimisation of Samruk Kazyna Berik Beisengaliyev emphasised.