Our relations are based on mutual respect, says Uzbek ambassador in Kazakhstan

Uzbekistan President Shavkat Mirziyoyev is paying a state visit to Astana March 22-23, one of his first foreign trips as the new leader of his country.Ahead of the upcoming talks, The Astana Times asked Uzbek Ambassador in Kazakhstan Ikrom Nazarov a few questions about the visit’s goals and his assessment of the bilateral relations between the two most populous nations in Central Asia. 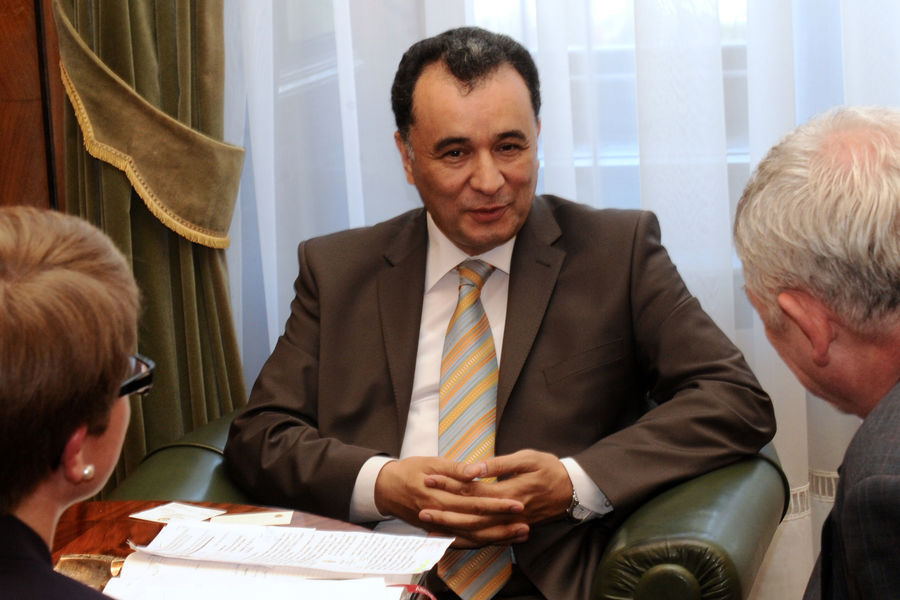 Mr. Ambassador, you have been representing your country in Kazakhstan for more than a year. How would you assess the significance and current condition of bilateral cooperation between Kazakhstan and Uzbekistan?

Centuries-old fraternal ties between Uzbekistan and Kazakhstan have strengthened considerably since each nation gained its independence and the right to determine its own foreign policy.

I am confident that our good neighborly relations based on the principles of mutual respect will continue improving to serve the common interests of both nations.The relations between Uzbekistan and Kazakhstan are characterised by a high level of mutual trust and lack of any contradictions. They can serve as a role model of cooperation for any other neighbouring countries.We are pleased to witness the current achievements of Kazakhstan in all aspects of building a strong state and society, profound reforms aimed at raising living standards of the people and strengthening the state’s reputation on the international scene. All these accomplishments are inseparably associated with the name of the President of Kazakhstan, Nursultan Nazarbayev.In terms of our cooperation, there are prerequisites to increase the volume of bilateral trade turnover, expand the potential of common transportation and communication systems and jointly fulfil the tasks we are facing on a step-by-step basis in the framework of the agreements on cooperation signed between the two countries.

Kazakhstan and Uzbekistan are the two largest countries in Central Asia. In your opinion, what changes have taken place recently in developing bilateral relations between the nations?

Generally, current international relations are characterised by growing geopolitical tensions and political confrontations, radicalisation and activities of religious fanatics and escalation of conflicts in our close and remote neighbourhood.Under these circumstances, we are required to keep our peace-loving dialogue going and take joint measures aimed at a timely and adequate response to the arising challenges and threats to the security of our two nations.

Uzbekistan and Kazakhstan, as Central Asia’s leading nations that possess considerable political, economic and human resources, bear a special responsibility for maintaining and strengthening the peace and stability of the entire region.

In this context, we are pleased to note that our stands on key matters of regional and international policy are in accord. Intensive and mutually beneficial cooperation in the framework of the United Nations, the Shanghai Cooperation Organisation (SCO), the Commonwealth of Independent States (CIS) and other international and regional organisations attests to this fact.We stand for further development of the contractual legal base of bilateral relations. Whereas 182 treaties and agreements between Uzbekistan and Kazakhstan have been signed, it is essential to draw up new ones and fulfill obligations arising from the current documents.

The state visit by President of Uzbekistan Shavkat Mirziyoyev to Astana is scheduled for March 22-23. What are the objectives of the forthcoming visit of the two heads of state?

The status of the state visit by the President of the Republic of Uzbekistan Shavkat Mirziyoyev to Kazakhstan is high. The format of the visit allows a thorough and comprehensive discussion of Uzbek-Kazakh relations in political, trade, economic, transport, cultural, and humanitarian areas. The two heads of states will have an opportunity to share opinions on various regional and international issues.

We expect the state visit to further continue the trustful dialogue launched in September 2016 in Samarkand. In the course of the meeting the two heads of state will review and assess the current status of our relations.

I would like to emphasise that the visit is supposed to give a new impetus to the unfulfilled potential and determine priority trends for further development of the Uzbek-Kazakh partnership.Uzbekistan’s and Kazakhstan’s economic potentials are complementary. With this in mind, great attention at the talks will be given to the advancement of trade and economic cooperation. The current contractual legal base and the documents to be signed in the course of the visit will open up new opportunities for building up mutually beneficial cooperation in this field.These efforts are aimed at raising the wellbeing of the populations in our two countries facilitating the integration of all Central Asian states into the processes of global economic development, providing inflow of foreign investments and increasing the transiting capacity of the Central Asian states.

Do you know if the Uzbek President has set new tasks in implementing the country’s foreign policy course, particularly in the regional context?

Over the years of Uzbekistan’s independent development, a comprehensive, balanced foreign policy course based on the state’s national interests has been determined. According to the concept of Uzbekistan’s foreign policy activities, the state’s “essential interests are associated with the Central Asian region.”Under the new circumstances President Shavkat Mirziyoyev has repeatedly declared the country’s foreign policy course steadfast focusing on intensification of bilateral contacts of Uzbekistan, primarily with Central Asian countries. Thus the tasks we are facing in the regional context have remained unchanged. At the same time I would like to note that pursuing the policy of peace and stability turning the Central Asian region into a zone of security and sustainable development has been a priority task not only for Uzbekistan, but for all Central Asian states.Equally important for all Central Asian states is setting up partnership among regional countries, diversifying trade, economic, technological, transport and other links among them and intensifying the process of drawing foreign direct investments and advanced technologies in respective priority branches of their national economies.