By Malika Orazgaliyeva in Central Asia on 23 March 2017 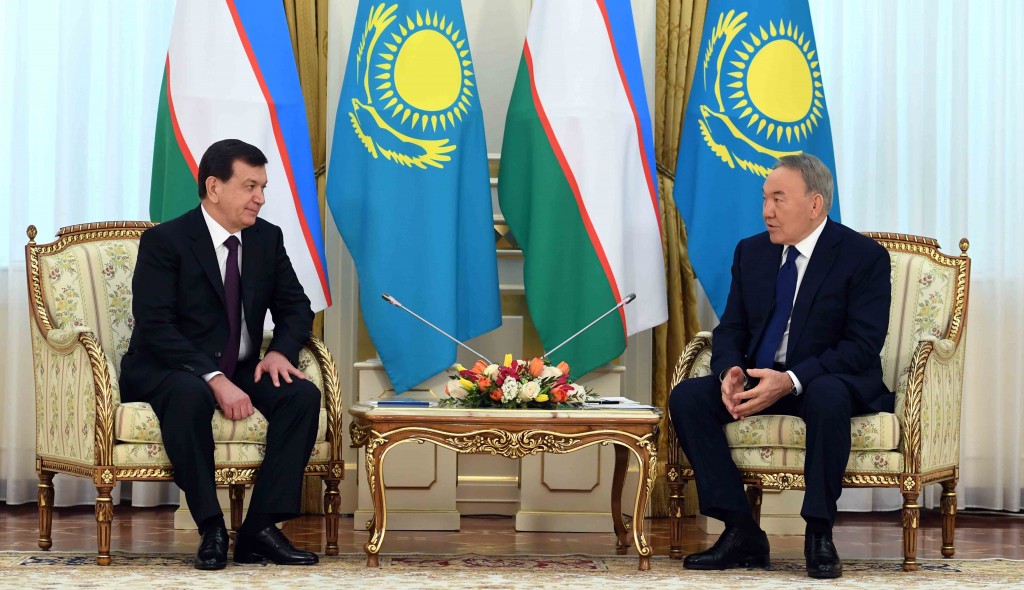 During their meeting at the Akorda presidential residence on March 23, Nazarbayev noted a sharp increase in trade turnover between the countries and that Uzbekistan has expanded the type of products it exports to Kazakhstan. The Kazakh leader also noted Kazakhstan plans to hold its first Kazakh-Uzbek business forum on the same day, which was expected to attract more than 500 entrepreneurs and result in 75 contracts totaling $1 billion.

Mirziyoyev stressed Kazakhstan’s election to a non-permanent seat on the UN Security Council has added international significance to bilateral relations.

“I would like to assure you that Uzbekistan will support all your activities. Much attention is now being paid to the regional cooperation. I hope that today’s meetings will serve as a basis for further effective cooperation between our countries,” he said, also wishing Kazakhstan success in achieving its Kazakhstan 2050 Strategy goals.

“Kazakhstan wishes prosperity and wealth to our strategic partner, neighbour and fraternal nation of Uzbekistan. We look forward to fruitful relations within the framework of bilateral contacts,” said Nazarbayev.

Following the official part at the Akorda, Nazarbayev and Mirziyoyev visited Astana Opera House and Nazarbayev University, where they were briefed on the university’s master plan, laboratory of industry automation, local research projects and laboratory of physics and math. Mirziyoyev left a note in the Honourary Guests Book.

Later in the day, the presidents took part in the opening ceremony of the MEGA Silk Way shopping centre and visited the EXPO 2017 construction site.

Prior to the visit, Mirziyoyev also gave a wide-ranging interview to the Kazinform international information agency.

The Uzbek President told the agency that approximately 230 enterprises operate in Uzbekistan with Kazakh capital and that 130 businesses operate in Kazakhstan with Uzbek capital.

Mirziyoyev also said one of Uzbekistan’s foreign policy priorities is to strengthen ties with its immediate neighbours.

“We all understand well that Central Asia is a single organism that for centuries had a common geographical, economic and cultural space. No country can individually solve the questions that concern all residents of the region. Those, for example, are the issues of delimitation and demarcation of state borders, transport communications, ecology, rational and equitable use of water resources,” he said in that interview.

The Uzbek president focused specifically on the need for cooperation in managing regional water resources in the face of global warming and rising consumption.

“Central Asia has always depended heavily on water resources. … Today, if we do not save each drop of water together, it will be a crime against future generations,” he said in the interview, adding that Kazakhstan and Uzbekistan support developing a unified strategy and adopting international legal norms for water use.

Mirziyoyev also noted the two countries are concerned about global and regional security and that Uzbekistan appreciates Kazakhstan’s work to strengthen stability in the region. He underlined Kazakhstan’s initiatives to establish the Conference on Interaction and Confidence Building Measures in Asia (CICA) and develop multilateral cooperation in other areas.

“I think that the upcoming meeting of the Shanghai Cooperation Organisation (SCO) in Astana in June and Kazakhstan’s chairmanship in this multilateral organisation are of great importance for increasing its effectiveness in combating transnational threats and strengthening peace and stability in our region,” he noted.

Uzbekistan and Kazakhstan, said Mirziyoyev, understand security is directly related to economic development. Therefore, combating terrorism and radicalism should include not only the intensification of security measures, but also efforts to ensure sustainable economic growth, freedom of entrepreneurship and the satisfaction of people’s needs.

“When we talk about the regional policy of our country and intensification of relations with our neighbours,” Mirziyoyev continued, “we have in mind Afghanistan, which has a common border with Uzbekistan. We all understand that the situation in Afghanistan carries certain challenges for Central Asia. Therefore, it is natural that Uzbekistan and Kazakhstan are interested in the speediest settlement of the Afghan problem,” he told the information agency.