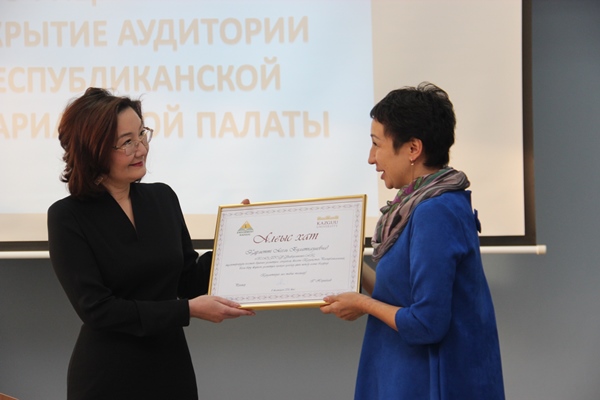 “The KAZGUU Endowment Corporate Fund was created in 2016 to support talented students offering young people, including those from socially vulnerable families, opportunities to fulfil their true potential, reach life goals and reveal natural talents. The fund was initiated in 2016 by president of KAZGUU University and a well-known public figure, [the late] Professor Maksut Narikbayev, Doctor of Juridical Science, who put his own heart into this project and invested a lot of effort into its realisation,” said Deputy Chairperson of the KAZGUU Board Nadezhda Korobko in an interview for this story.

The fund’s activity is focused on the university’s mission to make quality education more accessible. The fund aims to attract resources for the long-term financing of the university’s research, social and infrastructural programmes and projects. The fund runs numerous charity projects in collaboration with its partners, including the Taiburyl non–governmental association, Bolashak Corporate Fund, Atameken Council of Business Women of Kazakhstan, Republican Chamber of Notaries, Ana Uyi (Mothers’ Home) Public Fund, SOS Children’s Village in Astana and ZHERSU Investment and Industrial Corporation.

The KAZGUU Endowment allocated scholarships for the students of SOS Children’s Village in Astana within the Path to the Future project initiated by Korobko.

“In the future, this project will be expanded to all the key regions of Kazakhstan.  In addition, the fund runs another charity project called Zhas Ana-Bilimdi Ana (Young Mother-Educated Mother) aimed at providing social and educational support to young single mothers. Thus, the fund is implementing several social projects aimed at supporting gifted students from socially vulnerable groups and large families. It also contributes to developing a whole range of research projects,” she added.

In Kazakhstan, KAZGUU is the first and still the only initiator of social projects among universities. The university and its official partners provide educational grants, support young people and establish scholarships and discounts for students from socially underprivileged categories, gifted graduates of schools and lyceums, holders of the Altyn Belgi award (golden medal upon graduation of school), winners of competitions and other students.

“In turn, the fund gives its partners an opportunity to open lecture halls and get the Patron’s Card, which grants access to all the educational events held at KAZGUU University, use Narikbayev Library resources and many other privileges,” Korobko added. “For example, as part of Kazakhstan’s Independence anniversary celebration, KAZGUU University launched two named lecture halls.  At the official event, attended by Timur Toktabayev, vice minister for investment and development, and other representatives of government agencies, KAZGUU was commended for its important role in educating a constellation of successful and talented graduates who have made a significant contribution to increasing the prosperity and developing the law and statehood of Kazakhstan. Launching the lecture halls marked a new step in the collaboration with the university’s major partners, represented by several national banking investors.”

Since the establishment of the fund, the university has opened eight named lecture halls. To celebrate the fund’s first anniversary, an official ceremony will be held to present the lecture hall of the Atameken Council of Business Women. Modernised lecture halls will feature modern, multimedia and multifunctional design where the university’s partners will be able to hold business events, including research meeting and seminars, and conduct lectures by the leading experts for the university students.

Support of the patrons and the fund’s official partners allowed the university to grant more than 20 scholarships to young people.