ASTANA – Approximately 22,000 tonnes of uranium, representing an 8-percent decrease, will be extracted this year compared to a 25-percent increase in gold production, according to the research and knowledge management department of Samruk Kazyna Sovereign Wealth Fund, reported abctv.kz. 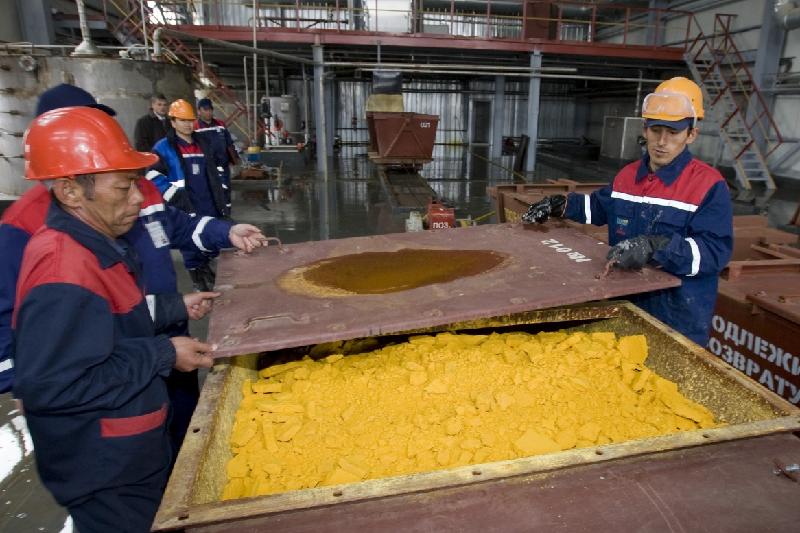 “In 2016, nearly 24,000 tonnes of uranium were produced in Kazakhstan, 1.7 percent more compared to a year earlier. In 2017, uranium production will decline 8 percent, or 2,000 tonnes, due to weak market conditions associated with an overabundance of uranium,” said department experts.

Production is expected to grow as market conditions improve. Under the plans to reduce production, uranium prices rose to more than $24 per pound from $17.75 at the end of November 2016 from the lowest level since February 2015.

Kazakhstan exports all the uranium produced mainly on long-term contracts, as the country does not own its own nuclear power plants. China remains the main importer of Kazakh uranium with a share of more than 50 percent.

The Central Asian nation, which mines 39 percent of the world’s uranium, is the largest global producer, followed by Canada and Australia, with shares in 2015 of 22 and 9 percent, respectively. The same year, production of nitrous oxide-uranium reached 71,000 tonnes, containing 60,496 tonnes of uranium. Uranium also comes from secondary sources, including uranium stocks in power plants.

Currently, 439 nuclear power plants globally consume uranium with an installed net power of 380 gigawatts. The U.S. is one of the largest consumers with a 28-percent share of total consumption. China and South Korea use about 12 and 8 percent, respectively. Starting in 2015, world consumption is expected to grow 4.8 percent annually to 97,900 tonnes in 2020. At present, 58 nuclear reactors are being built and 512 additional reactors are in the planning phase. Twenty-three Japanese nuclear reactors are in the process of restarting; in 2016, the U.S. launched its first new nuclear reactor in the last 20 years and four more are in the production stage.

New nuclear reactors will mainly be built in developing countries, such as China and India, where the demand for electricity is growing rapidly. As expected, the launch of new nuclear reactors will compensate for the reduction in uranium consumption by deactivated nuclear reactors. The action will help to correct the imbalance in supply and demand and in the long term, a steady increase in the number of nuclear power plants will positively influence the uranium market.

Spot uranium prices fell to $17.75 per pound at the end of November 2016, the lowest level since February 2005, and by the end of 2016 prices recovered to $20 per pound. The uranium market is supposed to remain volatile due to unsustainable policies and the economy. The market will preserve an excess of uranium until 2020, resulting in spot prices below $30 per pound.

At such low prices, however, few companies will develop new deposits. In this regard, long-term prices for uranium will be maintained by a growing demand coupled with a possible shortage of uranium supplies. In addition, main U.S. and European nuclear power plants are expected to renew long-term contracts for uranium supply in 2017-2018.