By Aigerim Seisembayeva in Nation on 7 March 2017

ASTANA – The bill “On introducing amendments and additions to the Constitution of the Republic of Kazakhstan” was approved March 6 in the second reading at a joint session of the Parliament chambers. 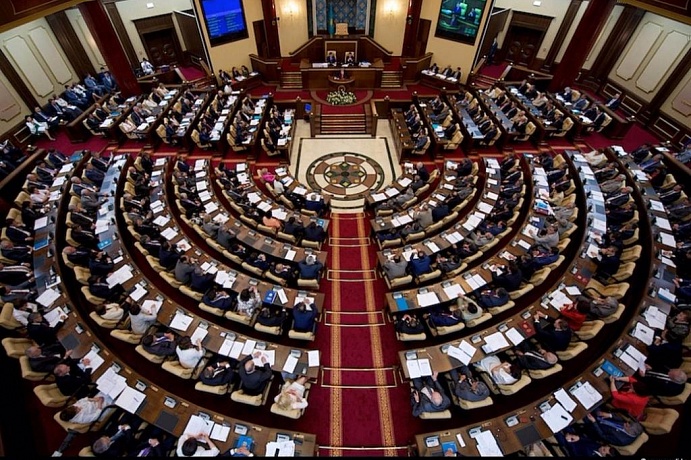 The day before, along with members of the Parliament, the draft amendments were discussed by representatives of the Constitutional Council, Prosecutor General’s Office, Supreme Court, Notarial Chamber, Academy of law enforcement agencies, Trade unions’ federation, Lawyers’ union, Forensic Centre of the Ministry of Justice and the Research institute of the Academy of Public Administration under the President of Kazakhstan. A number of non-governmental organisations also took part in the discussions. The legislation, as well as suggestions by the Mazhilis (lower house a Parliament) and Senate deputies, was considered by the joint commission of the Parliament chambers.

“The constitutional reform is, above all, about further development of democracy, strengthening the foundations of the rule of people, increasing the responsibility of the Parliament and the government, while maintaining a strong presidency,” said the Speaker of the Mazhilis Nurlan Nigmatulin, commenting on the amendments.

“The main essence of the proposed constitutional reform is the redistribution of powers between the branches of government. At the same time, the main objective of the reform is to make the executive branch most effective, responsible and responsive, as well as strengthen the controlling functions of the Parliament, while maintaining the presidential form of government. The proposed constitutional amendments correspond to the logic of the country’s and the society’s historical development,” deputy of the Mazhilis Nurlan Abdirov said at the session.

He also noted the bill submitted by the head of state includes 26 amendments to 19 articles of the Constitution. A considerable part of amendments raises the issues of redistributing the powers of the President, the Parliament and the government. These amendments are aimed at implementing the 100 Concrete Steps Plan of the Nation.

Previously, the bill had been passed in its first reading on March 3, after having been presented by the President of Kazakhstan, Nursultan Nazarbayev, for consideration. The nationwide discussion of the amendments to the Constitution took place Jan.26 to Feb. 24.

On the same day, President Nazarbayev exercised his right to submit the draft law to the Constitutional Council for its review and consideration.