Kazakh feminists have something to say

ASTANA – On the recent March 8 International Women’s Day, the Kazakh media exploded with the news that Kazakh feminists were marching in Almaty. Comment sections were filled with different opinions and views. Undoubtedly, KazFem, the group that organised the rally, has shown that feminists have something to say. 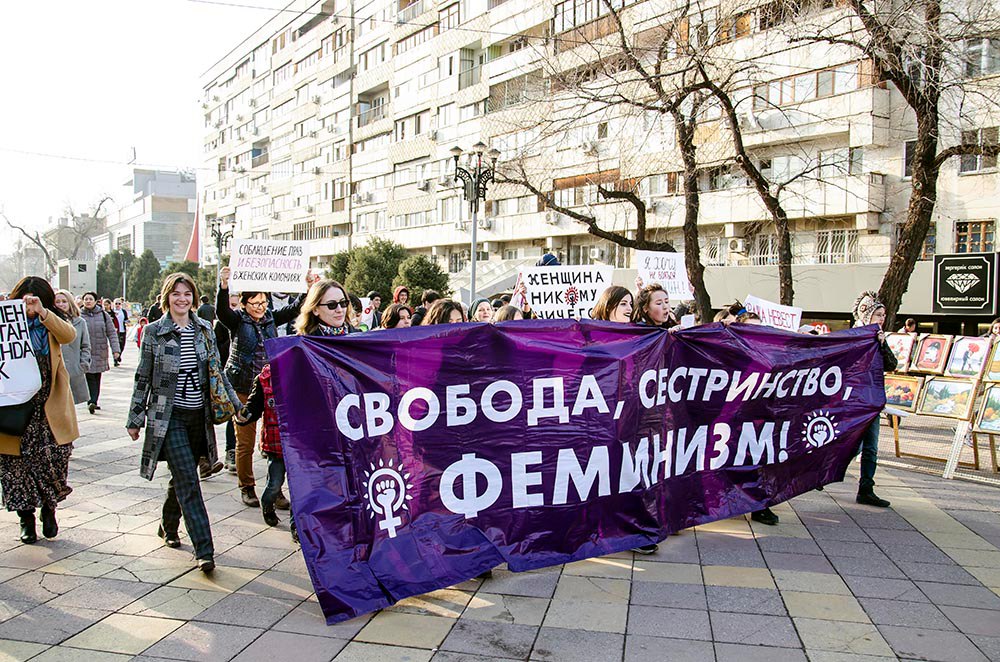 “We wanted to celebrate March 8 in a historical tradition, because it got lost and many people forgot what it truly means. Everyone thinks it is a holiday of femininity and flowers. A long time ago, women went to the streets to demand equal salaries with men, the right to vote and other things we take for granted today. Women think we always had that, but it was achieved only a hundred years ago. Later, that day became the day when women can go to the streets to talk about their problems,” said KazFem participant Arina Osinovskaya in an interview with The Astana Times.

“Then we sang a song ‘Bread and roses,’ which is a symbolical song created more than one hundred years ago. It is about the fact that women want not only to survive, but live. They want not only bread, but conditions for living,” she explained.

“We think there are lots of women’s issues that remain in Kazakhstan. Of course, they have changed. We can vote, we have the right to work and the right to have a higher education, but some things still need to be changed, both legally and in the minds of people,” she added. 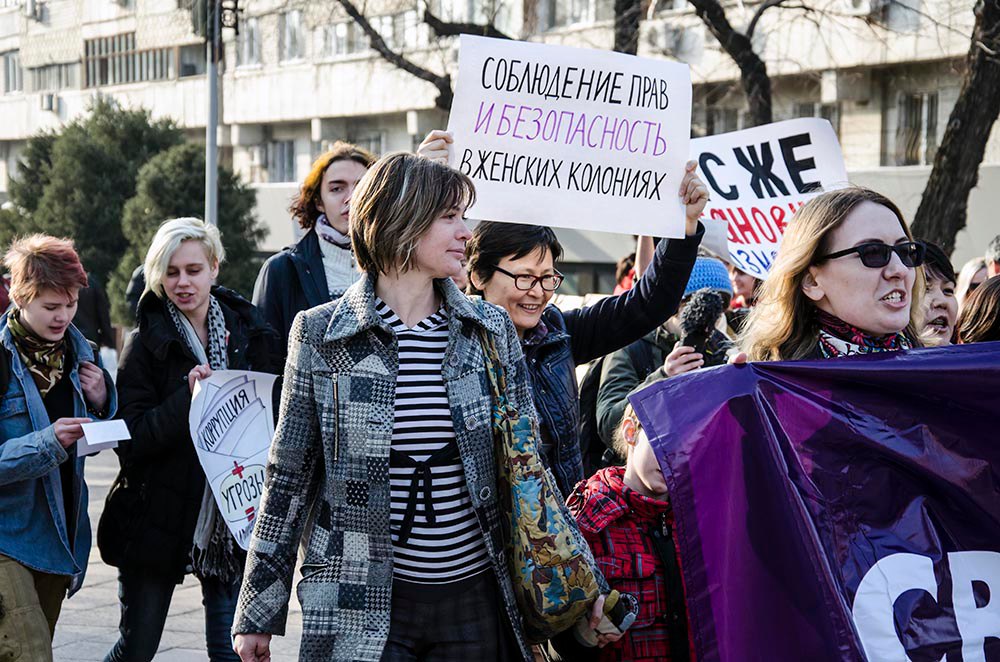 According to feminists, the first issue is domestic violence.

“It is an issue in every country. But in our country, due to the mentality most people still think it is a matter of the family and it is unnecessary to do something or to ‘wash dirty linen in public.’ as some say,” said Osinovskaya.

KazFem tries to tackle issues by organising public displays. Its first campaign, “Behind the stone wall,” was devoted to domestic violence. On Arbat [a walking street in Almaty], a girl wearing makeup and lying on the ground pretended to be a victim of domestic violence.

“We were putting stones around her with phrases on them such as ‘Hearth-keeper,’ ‘You are a wife,’ ‘You are safe with your husband” and others. All the phrases that make women put up with violence, not to report husbands and do nothing at all,” she said.

Every KazFem action is devoted to a special date or occasion. “Liberation of Lady Justice,” for example, rallied against accepting amendments on conciliation of the parties in rape cases. 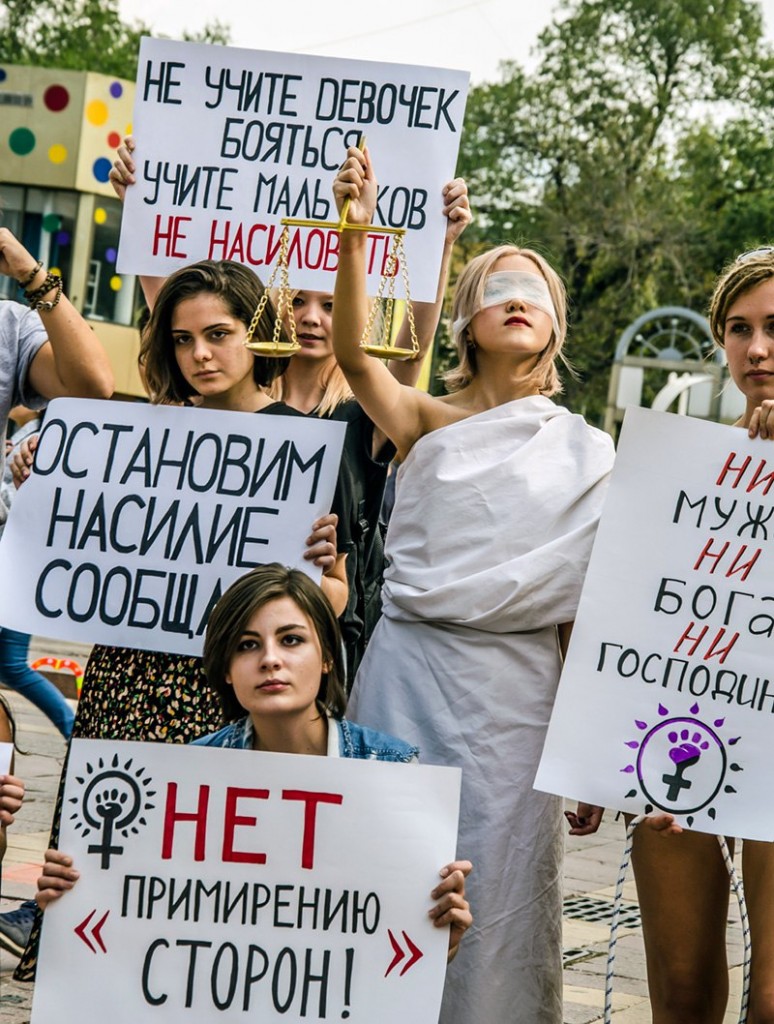 The second problem is bride kidnapping.

“Even today, some people think it is a normal thing to take a girl without her consent, to kidnap her and rape her. Afterwards, she has no choice and she has to marry that guy,” said Osinovskaya.

Feminists note economic concerns such as different wages also exist in the country. The issue was discussed publicly after KazFem’s march, as Minister of Labour and Social Protection Tamara Duissenova reacted by saying it depends on the field and specific conditions where individuals work. KazFem responded with official statistics showing that on average women earn 30 percent less than men. The question remains open, they say.

Osinovskaya also talked about roles in Kazakh society. In the majority of families, a girl is told from an early age that she must be a good wife and her main role is to give birth to a child.

“We are fighting for women to have their own choice. Career or family – she should choose by herself,” she said.

Feminism is inseparable from the political life of the state, as it is impossible to talk about feminism without taking into account political institutes. Of course, people’s perceptions and attitudes play a significant role in the matter.

“Usually, men say we invent our problems. But women, they never say we have created problems from our heads. They can say that we have nothing to do or something else, but they never say those problems are imagined,” said Osinovskaya. 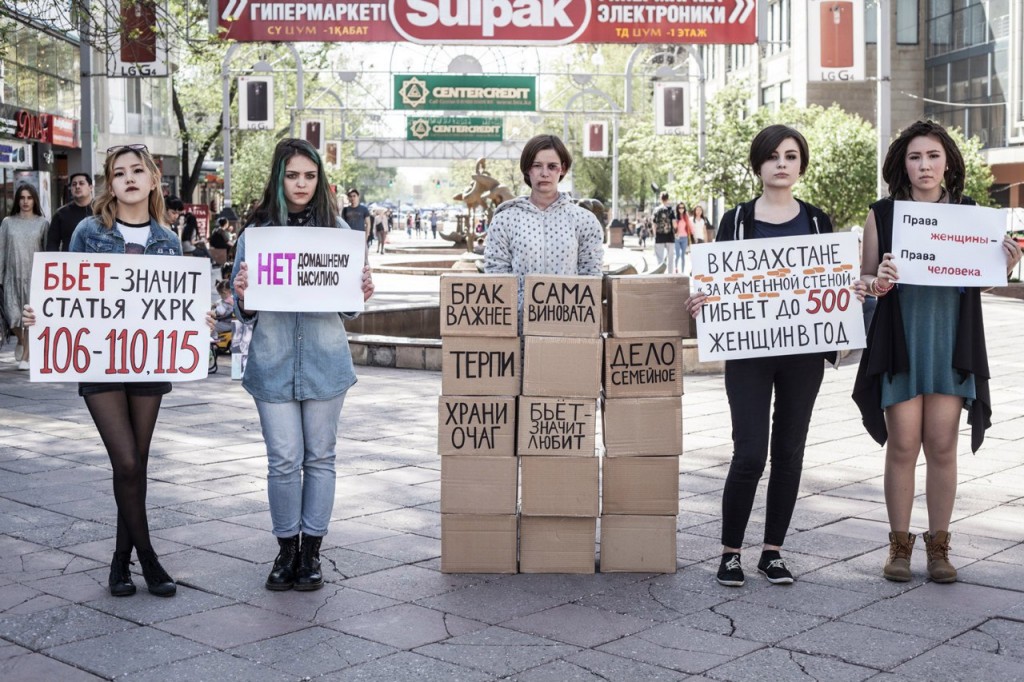 Behind the stone wall

The Kazakh population is very calm and not used to public action.

“It is really hard for people to go outside and talk about their rights. We try to show by our example that it is not necessary to go to a militant rally. A rally does not have to be against power; it should be for good things – for rights, amendments into the law,” she said.

Kazakh women’s groups began forming in the 1990s and numerous non-governmental organisations have been working in different aspects and spheres. Term such as “discrimination,” “gender,” “sexism,” and “feminism” are not unfamiliar to the country’s modern generation.

KazFem is an initiative of feminists based in Almaty. Their social network groups are used as a platform to discuss and study feminist theory, as well as organise different campaigns and meetings and exchange opinions. The vk.com group, which started with 150 individuals, now has more than 1,000 like-minded people.

“In our organisation, we have a horizontal system of management; we don’t have one leading woman to decide everything. We make decisions together. Our group was formed almost two years ago after we issued our first magazine ahead of March 8,” said Osinovskaya.

“Yudol” (“Vale” in Russian), the first feminist publication in the country, covers the problems of Kazakh women.

“There were 5-6 of us [who worked on the issue]. A lot of young women came to the presentation, so we understood that the issue is very important for the women in Kazakhstan and we thought we could make something bigger and more useful together,” she added.

The magazine is distributed online and in a printed version. While the number of subscribers is quite large, those who actively participate in all the campaigns numbers around 15. There is also a faction involved in particular events, such as cinema nights and book clubs.

Osinovskaya noted the progress and changes throughout the years are visible today.

“I have been following the materials in the mass media and I can see the improvement. Three years ago, the word feminism had a negative tone. I can see the situation changing,” she said.

“We have different legislative bases and historically we have a different context [compared to the Western world]. In France, people were able to go to a rally 100-200 years ago and here everything is just beginning. I hope that with time we will have a women’s march like in other countries, when thousands of women will go to the streets,” said Osinovskaya.