In Kazakhstan, 35 of 40 presidential powers to be redistributed under final draft proposal

By Aigerim Seisembayeva in Nation on 2 March 2017

ASTANA – Thirty-five of a proposed 40 presidential powers would be redistributed to other branches of government under the final draft of proposed constitutional amendments designed to decentralise the powers of President and increase the powers of the Kazakh Parliament. The draft was presented March 1 at the final meeting of the government working group on the issue. 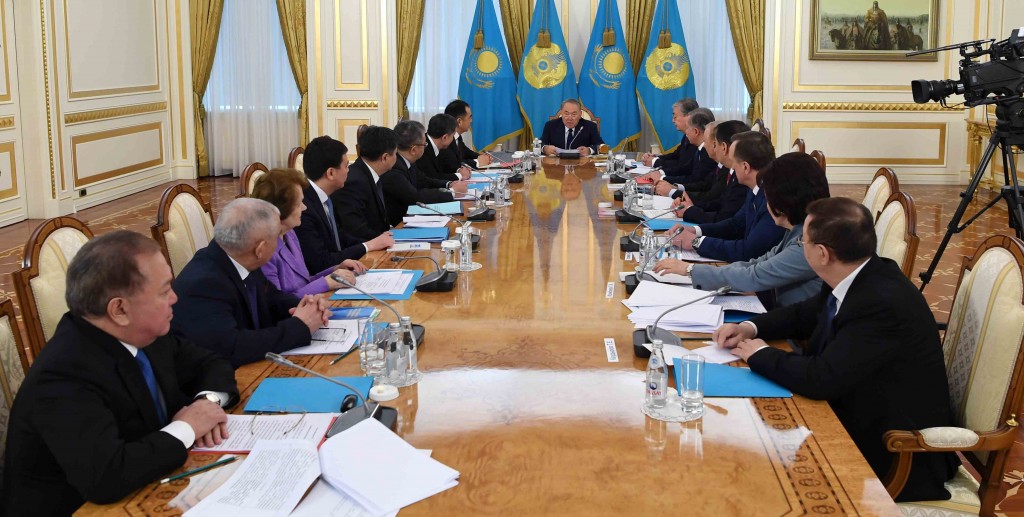 The powers to be redistributed would relate to economic governance, finance, public property and the administrative-territorial structure of the state, head of the working group Adilbek Dzhaksybekov announced at the meeting led by Kazakh President Nursultan Nazarbayev. The proposals need approval by the President and Parliament and no deadline has been set.

The final draft was created following a nationwide public input process from Jan. 26 to Feb. 24, during which 6,000 suggestions were submitted by the public concerning all areas of Kazakh law, including the powers held by each branch of government.

The final draft proposal includes 23 amendments to the Constitution and 35 amendments to existing laws. Under the proposal, Kazakhstan would remain a presidential republic, but each branch would operate more fully and independently.

“We cannot say that radical changes have been made, the basics are the same,” said Professor of the Kazakh Academy of Public Administration and member of the working group Zinaida Fedotova.

President Nazarbayev noted that the presidential republic form of government has served the country well in its 25 years of independence but that the time had come for a broader distribution powers.

“The proposed changes in the governmental system are aimed at further strengthening the democratisation of our society and the foundations of democracy, strengthening the role of the parliament, increasing the autonomy and responsibility of the government, keeping the presidential form of government. This is the essence of the reform. The constitutional framework of law enforcement and the judicial systems will also be improved. The guarantees of immutability of our constitutional system will be strengthened,” the President said at the meeting.

Nazarbayev also said that the public’s input was important in drafting the final proposals.

“I have tracked the discussion attentively, and my conclusion is that the people of Kazakhstan have mostly supported the amendments proposed. Today, we will look closely at the proposals and views of the citizens, summarise and take a decision on our further actions,” Nazarbayev said. “We are tasked to decide the fate of the document important for the future of our people, to summarise the nationwide discussion.”

The public input process resulted in a wide range of suggestions across many areas of Kazakh law, touching on 63 out of 98 articles of the Constitution, said Dzhaksybekov during the final working group meeting. Only those suggestions relating to redistributing powers were included in the final draft proposal. Other suggestions will be considered separately.

Suggestions were received to both strengthen and reduce the powers of the President and Parliament. Some suggested shifting to a parliamentary republic form of government and changing the way Mazhilis (lower house a Parliament) members are elected to single member constituencies. Others even suggested switching to a unicameral parliament.

“Proposals have been received to strengthen the requirements for deputies, limit the ability to run for candidacy to only once and increase the age limit for members of the Mazhilis and the Senate (upper house). Proposals on the status and activities of the government mainly focused on enhancing its accountability to the Parliament, i.e. agreeing to a structure of the government with the Mazhilis and the Senate on a mandatory basis. It was also suggested that the government should be accountable not only to the Mazhilis, but to the Parliament as a whole,” Dzhaksybekov stated.

But, said Dzhaksybekov, in general the public comments supported increasing the powers of Parliament.

The largest number of proposals received was on law enforcement and the judicial unit – 2,148 proposals. They dealt with strengthening requirements for judges, raising the minimum age and length of service in the legal profession. Dzhaksybekov noted that those amendments had already been made in accordance with the Plan of the Nation back in 2015. Proposals also included changing the order of formation of local courts and letting citizens elect judges.

“A big number of proposals came from lawyers, who offered to reflect the powers of the attorneys, strengthen the guarantees of the rights of the accused and reduce the term of arrest without a court order from 72 to 48 hours. Positive feedback was received on the proposal to clarify the status and powers of the prosecutor’s office,” Dzhaksybekov added.

A significant number of suggestions also concerned property rights. Maslikhats (local legislatures) and local executive bodies were also mentioned in the proposals. Citizens suggested increasing the age limit for deputies and limiting the number of terms they could serve. Citizens also suggested allowing akims (local mayors) to be elected by the public rather than appointed by the government.

Other proposals included strengthening the state language and adding English to the country’s official languages, he said. Citizens also suggested both banning and expanding the use of the death penalty.

Though only suggestions involving the redistribution of powers were incorporated into the working group’s final draft proposal, the government plans to consider and respond to the public’s other suggestions.

“The spread of citizens’ opinions points out our flaws and shortcomings in the governmental system. It indicates the spheres we must continue working on, especially in the law enforcement system. The working group has to identify the most important things that are requested most by the citizens; it is impossible to include everything at this stage,” Nazarbayev said.

The working group was established Jan. 11 after the President said in December at a ceremony marking the 25th anniversary of the independent Kazakhstan that it was time for the country to consider the redistribution of power. On Jan. 25, the President made a televised address on the redistribution of powers between the branches of government, where he presented the draft law “On amendments and additions to the Constitution of the Republic of Kazakhstan.” And on Feb. 24, the working group announced the completion of the nationwide discussion.

On March 1, Nurlan Nigmatulin, the Speaker of the Mazhilis, announced the convening of the joint session of Parliament for March 3 where many experts consider the proposed amendments to be discussed.