By Aigerim Seisembayeva in International on 2 March 2017

ASTANA – Kazakh Foreign Minister Kairat Abdrakhmanov outlined once again Kazakhstan’s priorities in human rights, democratisation and disarmament processes in a high-level segment session of the UN Human Rights Council (UNHRC) and the Conference on Disarmament (CD) as well as during bilateral meetings over the course of his visit to Geneva Feb. 27 to March 1. 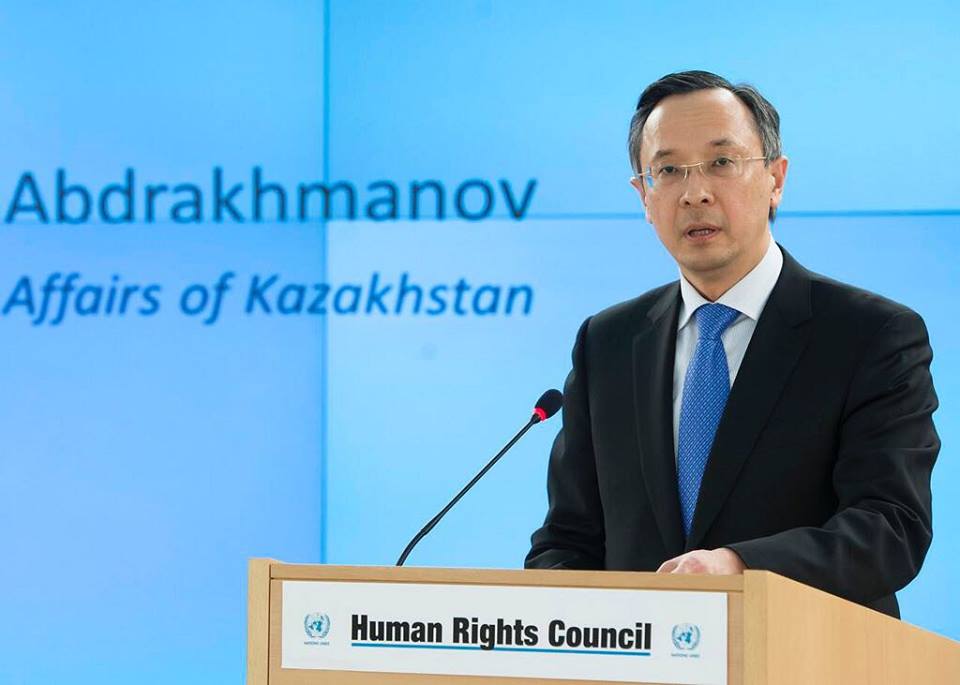 Addressing the participants of the Feb. 28 UNHRC session, Abdrakhmanov outlined Kazakhstan’s priorities and objectives regarding the effective implementation of human rights.

“The promotion and effective protection of human rights is impossible without peace, security and development. The three pillars on which United Nations activities are based are closely interlinked and mutually reinforcing,” the minister stressed.

According to Abdrakhmanov, Kazakhstan regards its election to the UN Security Council (UNSC) as a high responsibility and a sign of the international community’s trust in Kazakhstan and its peaceful policy, and in the country’s initiatives and proposals to strengthen the UN’s role in ensuring peace and security across the globe.

In this regard, he highlighted that on March 2, Kazakhstan celebrates the 25th anniversary of its accession to the United Nations. He emphasised that Kazakhstan is committed to progressive democratisation, has ratified universal human rights documents and is constantly working on implementing their provisions into national legislation.

In addition, Abdrakhmanov noted that Kazakhstan would continue to contribute to the achievement of global sustainable development. One of these steps will be EXPO 2017 in Astana this summer. The expo, with its theme of “Future Energy,” will promote sustainable energy and finding ways to mitigate the negative impacts of climate change.

Speaking at the Conference on Disarmament the same day, Abdrakhmanov presented Kazakhstan’s position on important international issues and stressed that the Conference has proven potential to make a major contribution to the disarmament process.

Speaking about Kazakhstan’s approaches to nuclear disarmament, the minister highlighted that the subject is one of the key priorities for Kazakhstan’s tenure as a non-permanent member of the UNSC. This was presented in the policy address by Kazakh President Nursultan Nazarbayev to the UNSC in January.

At a meeting with UN Special Envoy for Syria Staffan de Mistura, the progress of the Geneva talks on a Syrian settlement was discussed. The sides noted the relevance of the Astana process in bringing peace to Syria and the region.

Abdrakhmanov also held a meeting with Director General of the World Trade Organisation (WTO) Roberto Azevêdo and congratulated him on his re-election to the post for a second term. Azevêdo thanked the Kazakh side for supporting his candidacy and noted the keen interest of the WTO to expand cooperation with Kazakhstan. He also stressed Kazakhstan’s WTO membership will contribute to the effective implementation of the country’s trade potential and facilitate the integration of Central Asia into the global trade system. 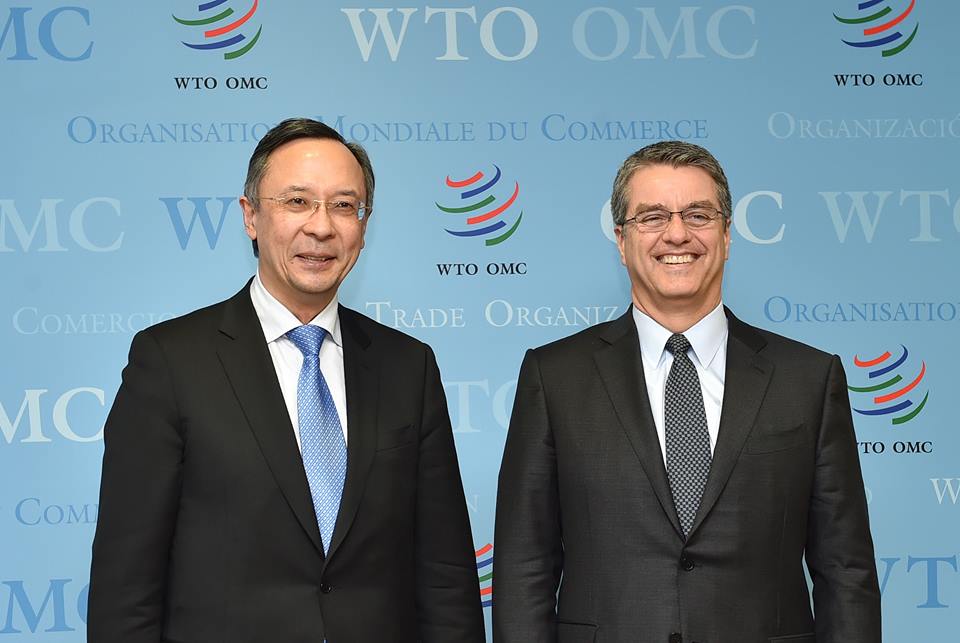 Abdrakhmanov also congratulated Azevêdo on the entry into force of the WTO Agreement on Trade Facilitation. Kazakhstan, the largest landlocked country in the world, has huge transit potential and is interested in the implementation of an agreement that will help Kazakhstan reduce trade costs by 15 percent.

In turn, Executive Chairman of the World Economic Forum (WEF) Klaus Schwab said at a meeting with Abdrakhmanov that the WEF attaches great importance to cooperation with Kazakhstan. He praised the growing role of Astana as an important platform for discussing complex issues of international relations and the global economy, noting in this regard the talks on Syria within the Astana process. Schwab also invited the Kazakh side to participate in the World Economic Forum on the Middle East and North Africa that will be held in Jordan May 19-21.

Abdrakhmanov focused on the implementation of Kazakhstan’s third modernisation programme, which aims to create a new model of economic growth to increase the country’s global competitiveness. The minister noted the interest of the Kazakh government in WEF initiatives on energy partnership and human capital development.

Abdrakhmanov also met with Executive Secretary of the UN Economic Commission for Europe (UNECE) Christian Friis Bach, who highlighted the successful chairmanship of Kazakhstan in the Commission and its Executive Committee, which contributed to closer cooperation between UNECE member states during tense economic and political times in Europe. 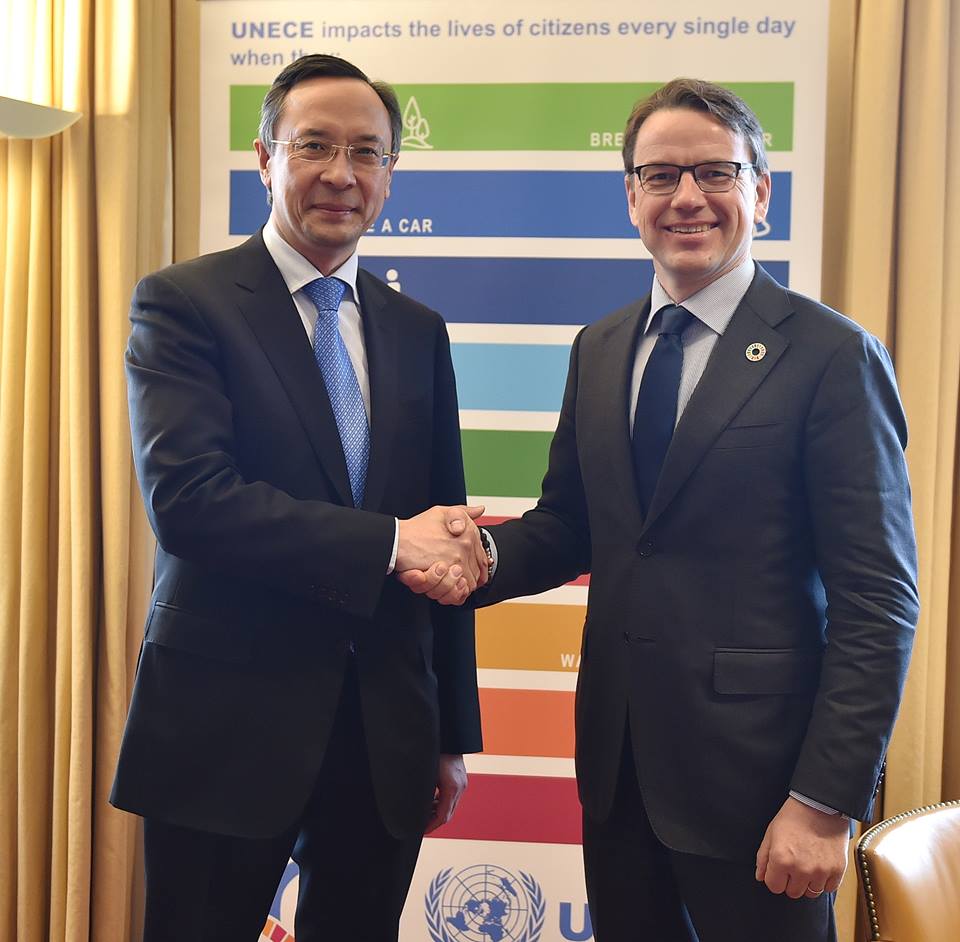 Abdrakhmanov noted Kazakhstan’s interest in expanding cooperation with the UNECE, as well as in creating new directions and formats for such cooperation in the context of global economic and social crisis.

Bach commented on the joint preparation of the Kazakh government and the UNECE for the Ministerial Conference and the International Energy Forum that will be held June 11-14 as part of EXPO 2017 in Astana. He also noted the importance of the exhibition and its focus on sustainable energy, which, in his opinion, will contribute to reaching the UN Sustainable Development Goals and give significant impetus to the development of Kazakhstan’s energy sector.