By Aigerim Seisembayeva in Nation on 4 March 2017

ASTANA – Kazakh President Nursultan Nazarbayev introduced March 3 to a joint meeting of the chambers of the Parliament the bill “On introducing amendments and additions to the Constitution of the Republic of Kazakhstan (first reading).” The bill proposes amending 23 articles of the Basic Law, redistributing 35 presidential powers. 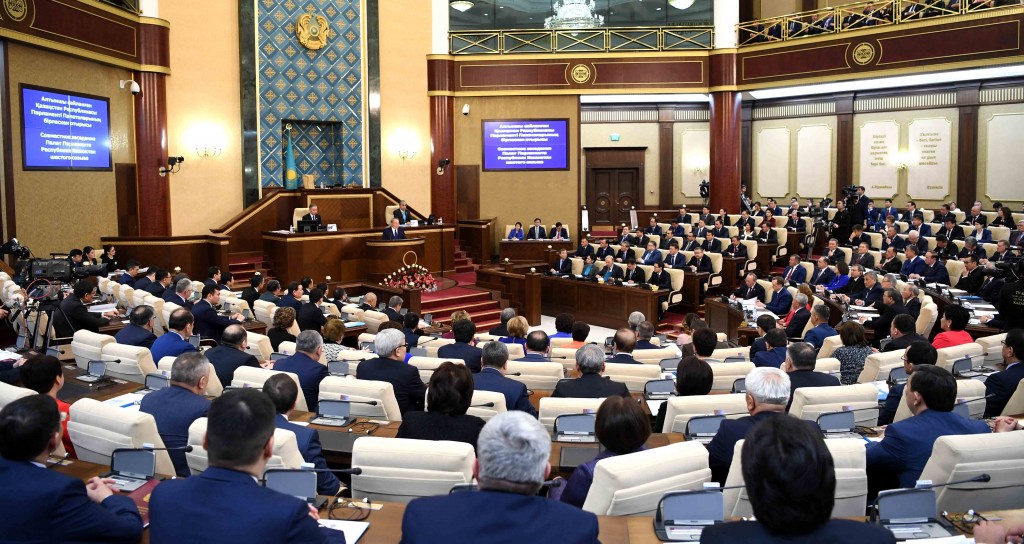 The new reforms keep the presidential form of government while strengthening the roles of the legislative and executive branches.

Speaking before members of Parliament, Nazarbayev highlighted the key factors and aspects of political reform provided by the draft amendments to the Constitution.

The President focused on the process of preparing the draft amendments, highlighting the openness and transparency of the discussion process.

“Upon my order, the draft was presented for nationwide discussion, which was held intensively for a month. Every single citizen had the opportunity to express his/her opinion. We all witnessed not only a large-scale discussion, but also a high-quality one,” he said.

Nazarbayev also presented the results of the working group’s activities, highlighting the ambiguous understanding of the amendments to Article 26 of the Constitution by some Kazakh citizens.

“The working group received 6,000 proposals that concern two thirds of the articles of the Constitution and all of its sections. The constitutional reform is aimed at consolidating our society. I, therefore, propose to leave Article 26 in its previous version. Given the public input, it could be argued that the bill is a consolidated position of the people of Kazakhstan. The people have spoken their mind and thus supported the modernisation of the government,” Nazarbayev said. Proposed amendments in Article 26 would have changed the wording on the protection of property rights from “citizens of Kazakhstan” to “everyone”, which caused wide discussions about the appropriateness of such step.

The President emphasised separate stages of the country’s political modernisation, highlighting the peculiarity of current reforms.

“First, the new law significantly strengthens the Parliament’s role in public affairs, including in the formation of the government. Second, the government becomes more independent, receiving the powers to directly manage the economy. Third, the constitutional basis of law enforcement and judicial systems will be modernised. The law lays the foundations for the activities of the Prosecutor General’s Office, providing the highest supervision over the observance of the rule of law and representation of state interests in court. Fourth, constitutional control will be strengthened. Fifth, guarantees of immutability of our independence, unitary status, territorial integrity and form of government are to be fixed at the constitutional level,” Nazarbayev stated.

The head of state noted the high professionalism of all branches of government, emphasising their ability to take responsibility and make decisions independently.

“The new challenges mentioned in my state-of-the-nation address lay particular responsibility on the legislative and executive bodies. I am sure the expansion of powers of the Parliament and the government will contribute to a more effective achievement of the objectives of the third modernisation of the economy,” the President said.

“Effective use of powers requires tireless daily work. Particularly important is the simultaneous beginning of political and technological improvements. They will mutually reinforce and complement each other,” he said.

In conclusion, Nazarbayev addressed the members of Parliament with a request to consider the bill.

Following the President’s speech, the head of the Presidential administration and head of the working group on the redistribution of powers between branches of government Adilbek Dzhaksybekov made a detailed presentation of the proposed amendments to the deputies of the Parliament.

Among other things, Dzhaksybekov highlighted that under the proposed reforms, the prime minister will submit nominees for the government to the head of state after consulting the Mazhilis (lower houseof the Parliament).

“An exception is made for the ministers of foreign affairs and defence, who will be appointed by the President alone. An important innovation is the norm, according to which the government will resign before the newly elected Mazhilis, not the newly elected President,” he said.

Dzhaksybekov also noted that the President would retain the right to impose moratoria on bills and to relieve the akims (mayors) of different levels of their duties.

The bill was passed in its first reading on the same day. A joint commission of members of the Mazhilis and the Senate was set up to prepare the bill for the second reading which is expected to take place on March 6.