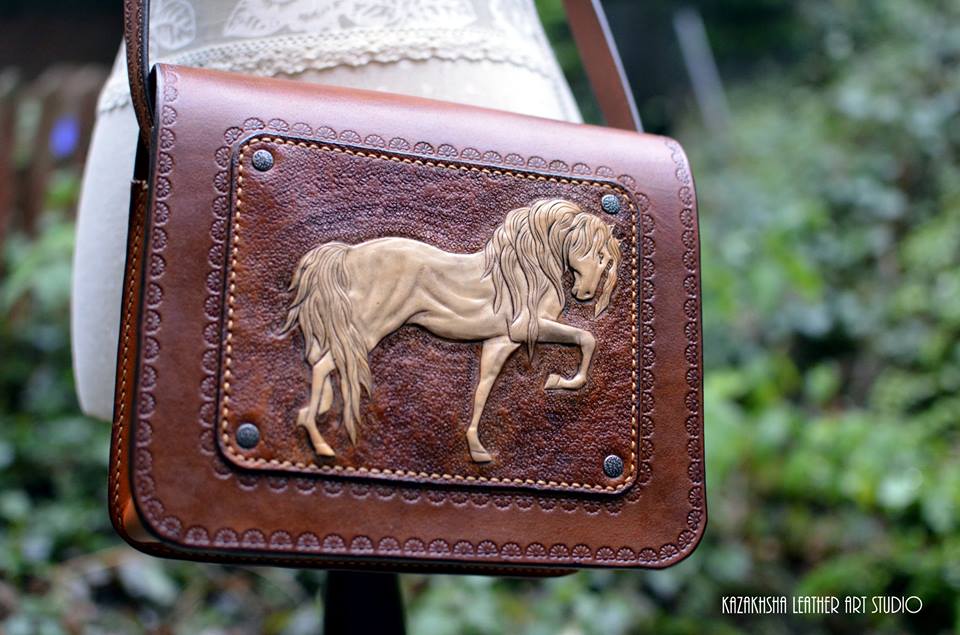 “Most of my items are made of full grain vegetable tanned leather, which is the best material among other types of leathers. Working with this particular kind of leather, I use old techniques such as hand sewing and tooling. Almost every work, product and project I do has a hint of nomadic touch with a blend of Central Asia spirit and heritage of Sarmatian and Scythian ancient cultures,” notes her website,www.kazakhshaleatherartstudio.co.uk.

Sagatova is not only an artisan, she is also a businesswoman, running her studio and coping with everything on her own. The studio is not only about creating, as she needs to multi-task orders to keep her business going. Sagatova has numerous responsibilities, such as customer calls, administrative work, promotion and working on new designs, she said in an interview for this story. 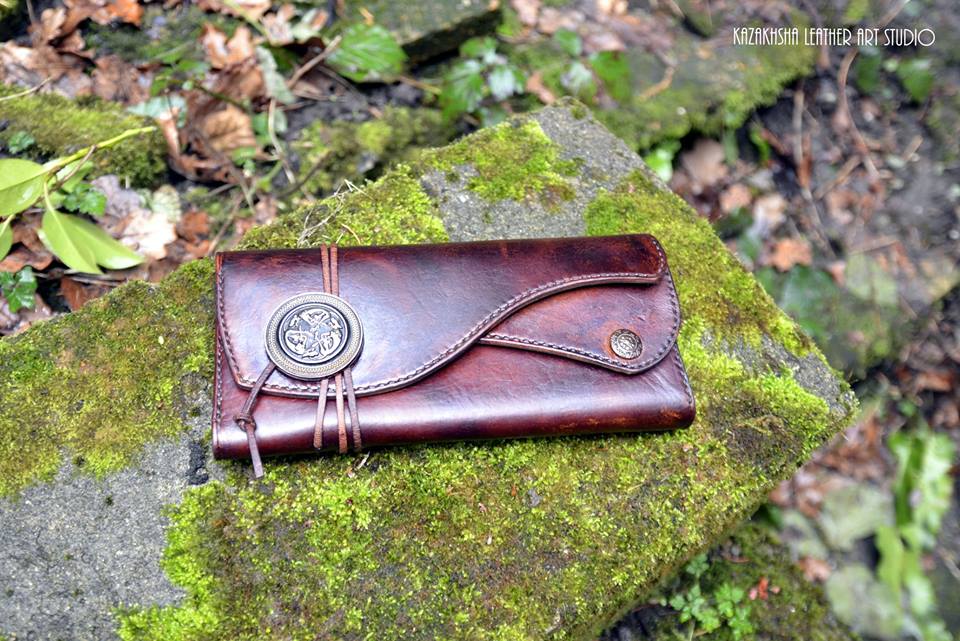 “For me, my art studio is both my business and way to express my creativity. It is my lifestyle. My work is shaped and scheduled around my leather art studio. It takes practically all my life. It supports me, pays my bills and supports my children. I think it is a unique situation when a person does what he wants and it pays his bills, because in real life sometimes people do what they don’t like. They do office work and absolutely hate it and back home they wish they could be someone else,” she said.

Sagatova has been living in the United Kingdom for 10 years. Speaking fluent English and Italian, she previously worked as an interpreter. She always had hobbies, but they never were on a full-time or professional level. 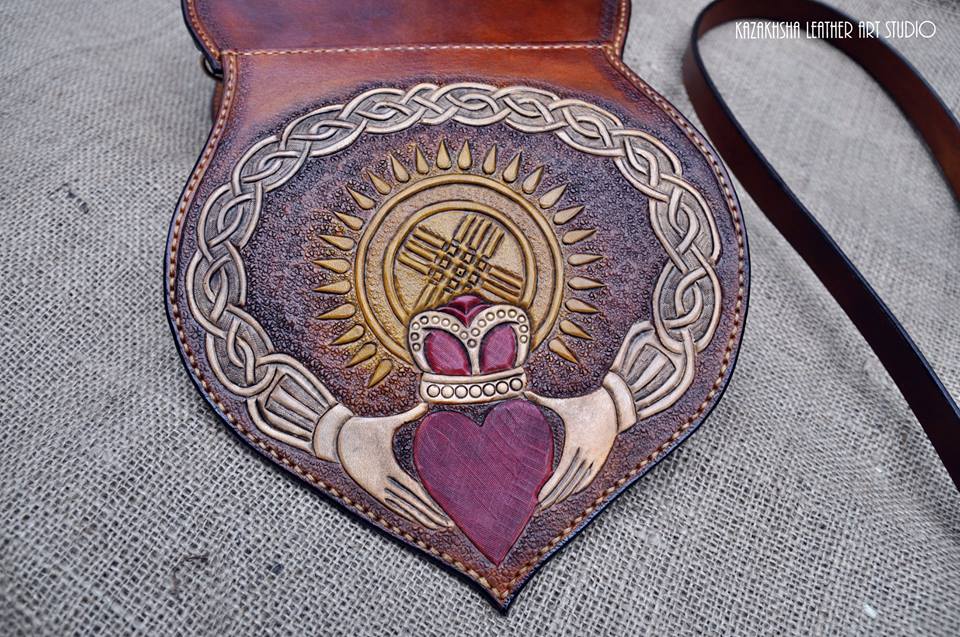 “I enjoyed my job. It was the right decision to go in that area, but at some point I felt that there was no more progression for me. There is always room for improvement in any profession, but I didn’t see myself working as an interpreter until the end of my life,” she said.

She has been doing crafts since age six, working not only with leather, but also with metal, wood, wool and silver. Three years ago she finally decided to launch her own studio, Kazakhsha, which literally means Kazakh.

“I am from Kazakhstan. It is my identity. I’m not promoting Kazakhstan. I don’t think the country needs promotion. The country is representing itself. I think that Kazakhsha is sort of a reminder for me where I am from, where my roots are. That’s it,” said Sagatova. 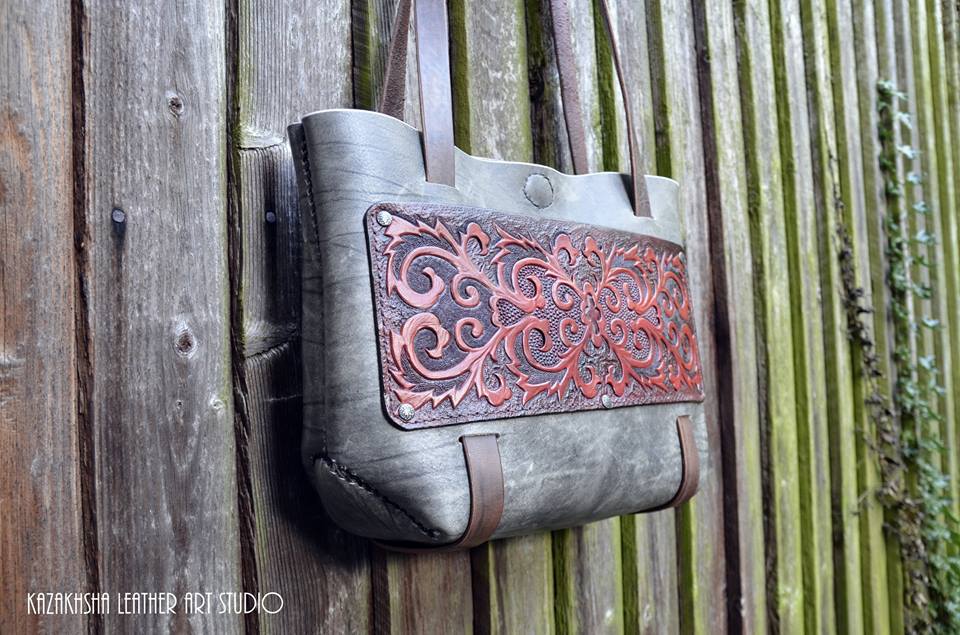 Kazakhsha Leather Art Studio produces items such as bags, wallets, clutches, passport covers and belts and Sagatova falls in love with every item she makes. Each piece is different and takes a different amount of time, such as a rifle case that needed two months.

She is inspired by various styles, techniques and themes.

“I like Kazakh motifs. I am familiar with them, they are native for me, but I have to accommodate different tastes and different clients. Some people ask for replicas of certain images; some ask for images of horses, Scandinavian patterns, Celtic patterns and others. It is not 100 percent Kazakh motifs,” she said. 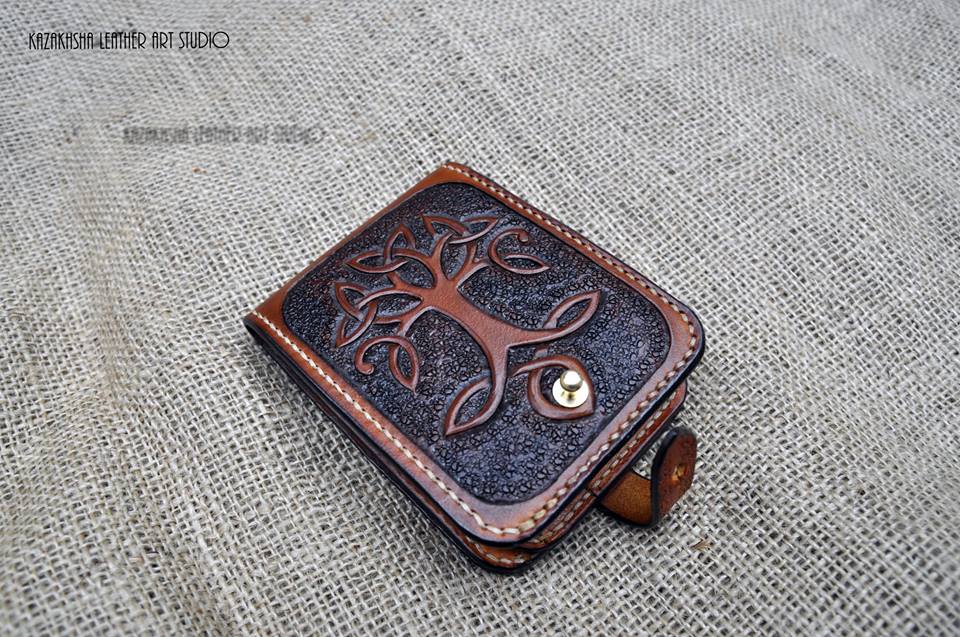 Customers are not always familiar with Kazakhstan or Kazakh designs.

Sagatova sells items through her website, which hosts an e-commerce platform. They are also available on Etsy, a popular online marketplace featuring handmade items.