Astana to host another international meeting on Syria

By Malika Orazgaliyeva in International on 14 March 2017

ASTANA – Astana will host another round of talks on settling the conflict in Syria within the Astana Process March 14-15. 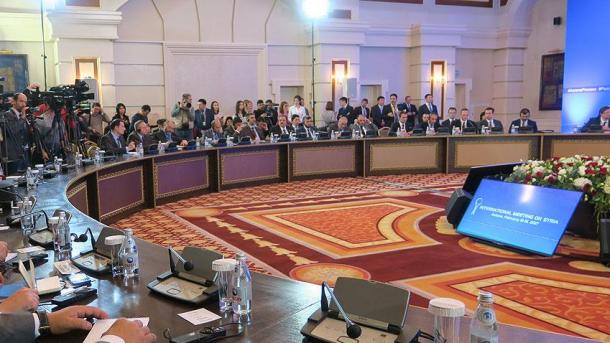 High-ranking delegations from Russia, Turkey and Iran have confirmed participation and invitations have been sent to representatives of the United States, United Nations and Jordan, according to a March 9 press release from the Kazakh Ministry of Foreign Affairs. The guarantor states are expecting confirmation of the participation of delegations from the government and the armed opposition of Syria.

According to the press release, within the framework of the Astana Process, launched with the full support and direct participation of President of Kazakhstan Nursultan Nazarbayev, there were two rounds of high-level international meetings on Syria on Jan.23-24 and Feb.15-16, as well as a meeting of experts on Feb.6. These meetings produced rules for a joint operational group to monitor the ceasefire regime in Syria paving the way for the parties to discuss the political agenda within the framework of the Geneva Process and in accordance with UN Security Council Resolution 2254 (2015).

Kazakhstan will continue its efforts to seek a political solution to the conflict in Syria, according to the ministry statement.

On March 8,  UN Secretary-General’s Special Envoy for Syria Staffan de Mistura noted the role of the Astana Process in international efforts to find a peaceful solution to the conflict in Syria during the UN Security Council regular meeting devoted to a political settlement of the conflict in Syria.

“The Astana Process is becoming an integral part of the architecture of peace, which is being built brick by brick under the auspices of the UN in Syria,” he said.

The members of the Security Council acknowledged that the continuation of the political negotiations in Geneva was made possible thanks to the regime of cessation of hostilities, fixed in the framework of the Astana Process. They called on the conflicting parties to fully comply with this regime and ensure the humanitarian access to human settlements in accordance with the UN Security Council resolution and the agreements of Dec.29, 2016.

Speaking in Parliament March 13, Kazakh Foreign Minister Kairat Abdrakhmanov said special representatives of the Russian President and Foreign Minister on Syria, deputy foreign ministers from Turkey and Iran have confirmed their participation in the Astana talks.

“The format and the agenda of the meeting depend on three guarantor states,” Abdrakhmanov told the deputies. “The regime of cessation of hostilities in Syria is taking hold.”

It has also become known that an official delegation from the Syrian government led by the country’s UN ambassador is to take part in the talks, as well as a delegation from Jordan. In Washington, the U.S. Department of State also confirmed its ambassador in Astana will take part as an observer. The participation of the Syrian armed opposition remained unclear at the time of writing.