By Anuar Abdrakhmanov in Sports on 28 March 2017

ASTANA – Armenia beat Kazakhstan 2:0 in Yerevan on March 26 in a qualification match for the 2018 FIFA World Cup. Armenia was favoured to win, particularly since they were led by Manchester United’s outstanding midfielder Henrikh Mkhitaryan. 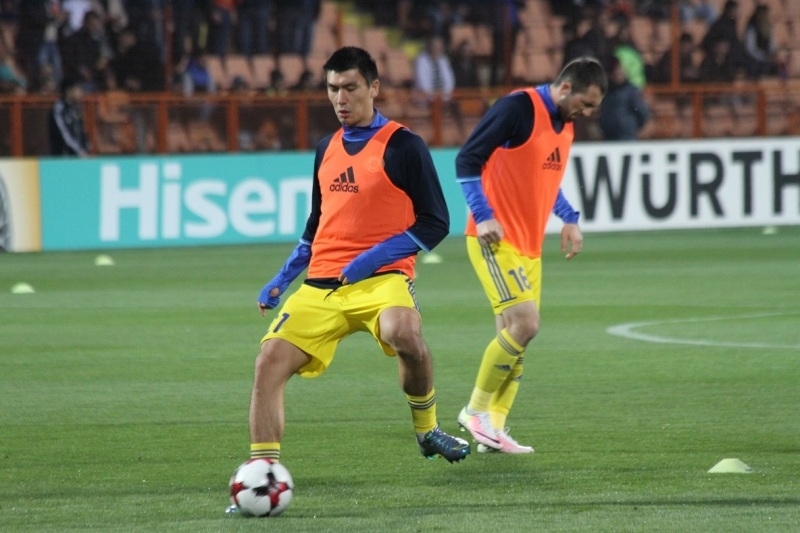 Going into the match, Kazakhstan had few losses but was hampered by an injury to experienced defender Yuri Logvinenko. The Kazakh team’s usual goalie was also out and was replaced by national team veteran David Loria.

The Kazakh team played well in the first half, successfully defending repeated attacks on goal, including Mkhitaryan going one-on-one with the goalkeeper.  Mkhitaryan’s shot went past the goal. The Kazakhs responded with a good strike following a corner kick by Yerkebulan Tungyshbayev.

Early in the second half, Kazakhstan was more aggressive in its own attacks, but was not accurate. The Armenians took advantage of this. After one of the losses in midfield, they caught their opponents on a counterattack, which resulted in Kazakh defender Sergei Maliy being penalised in an attempt to stop breaking Mkhitaryan as the latter was gaining operational space. The referee penalised the Kazakh defender with a second yellow card and the visitors had to end the match in the minority. This basically decided the outcome. The Armenian team used the power play effectively, with Mkhitaryan and Aras Özbiliz earning their points.

Following the defeat in Yerevan, Kazakhstan remained at the bottom of their qualification Group E with only two points from five matches played so far.

In other matches of the group’s fifth round, Montenegro lost at home to Poland 1:2, while Romania and Denmark played a goalless draw.

In the group’s standings, Poland continues to lead with 13 points, followed by Denmark and Montenegro with seven points each. Romania and Armenia have six.

A direct ticket to the final stage of the FIFA World Cup due next year in Russia goes to the winner of the group, with the runner-up progressing to the play-offs.