By Anuar Abdrakhmanov in Sports on 24 March 2017

ASTANA – The UEFA Futsal Cup’s Final Four will be held April 28-30 in Almaty. The teams that will compete for the cup include Sporting Lisbon (Portugal), Movistar Inter (Spain), Gazprom-Yugra (Russia) and AFC Kairat (Kazakhstan). 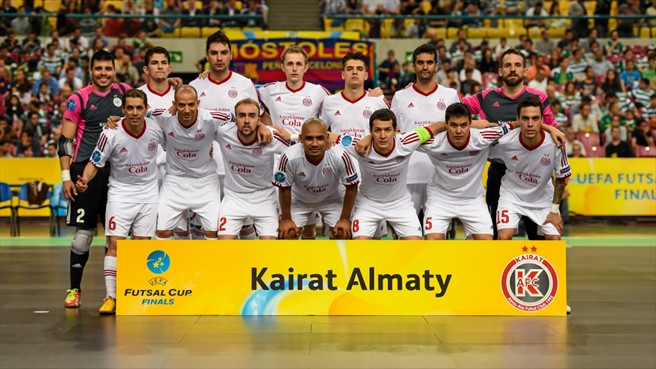 Kairat will first play Movistar Inter in the semifinal while the Russian and Portuguese clubs will face each other in the second match.

“First of all, I would like to thank our management for the organisation of the Final Four in Almaty. I think the match against Movistar Inter will be a tough one, but we will be ready to fight. They are a famous Spanish team that has won the UEFA Cup. So, the match promises to be really intense. But we play at home, so we count on strong support from our fans. Come and help our team win. I think we can give our fans reasons to celebrate and Kairat will get to the final,” said AFC Kairat’s head coach, Brazilian specialist Cacau.

According to Almaty captain Dinmukhambet Suleimenov, it will be a “great responsibility and honour for the team” to play in the Final Four in Kazakhstan.

“Movistar Inter is a very serious opponent. The Spanish club is one of the strongest in Europe, so playing against them will not be easy. Of course, we understand that there are no weak teams at the decisive stage, and we have to get up for each game as much as possible. The match against them will be very interesting. Moreover, futsal fans will enjoy watching one of the world’s best players Ricardinho. Our objective obviously is to reach the final. We will do our best to please our fans and win that match,” he promised.