By Aigerim Seisembayeva in International on 7 February 2017

ASTANA – The joint working group for monitoring the ceasefire regime in Syria held its first technical meeting behind closed doors Feb. 6 in the Kazakh capital. Representatives of Russia, Turkey, Iran, as well as the United Nations discussed the details of implementing the ceasefire agreement from December 2016. 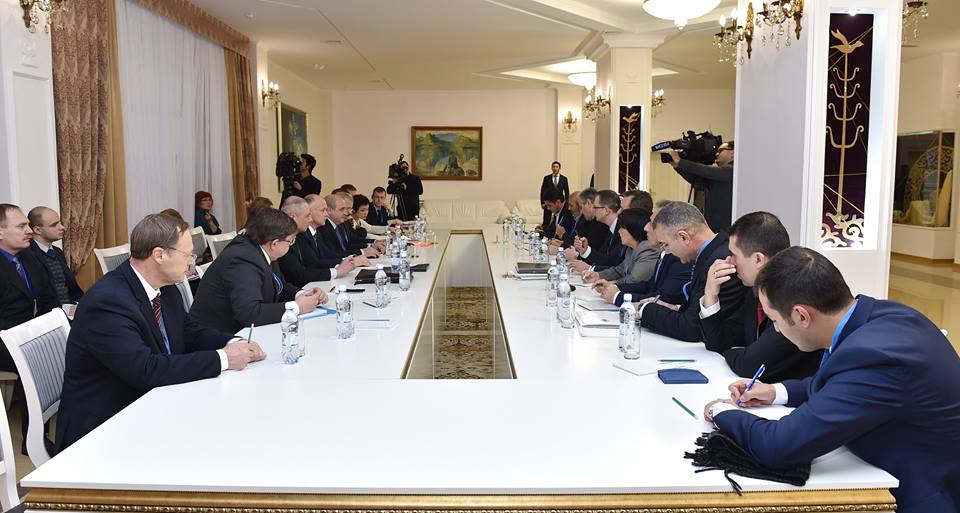 Jordan also participated as an observer, marking the first time an Arab nation, other than Syria itself, took part in this process launched last month.

“Today, the delegations of Russia, Turkey and Iran, as well as the United Nations representatives, have held the first session of the working group which was formed following the arrangements made here in Astana on Jan. 23-24. The participants of the meeting discussed the progress of the ceasefire regime observance in Syria, the special measures of creating the effective monitoring and control mechanism to ensure full observance of the ceasefire regime, prevention of any provocative acts and definition of all modalities of the regime,” he said.

The participants also discussed measures of mutual trust and free access of humanitarian aid, he noted.

The delegations confirmed their readiness to continue interaction for the benefit of full observance of the ceasefire regime, Gadzhimagomedov added.

“All the members of the delegations express sincere gratitude to the Kazakh side for providing the platform here in Astana to continue the Astana process and for creating favourable conditions to hold the first meeting of the working group,” he declared.

“During the talks, the Jordanian side presented very interesting information. They described the situation in the south of Syria and the readiness of the opposition groups in the southern provinces to join the ceasefire regime and fight against international terrorist organisations, such as the Islamic State of Iraq and Syria (ISIS) and Jabhat al-Nusra, which operate in southern Syria,” said Gadzhimagomedov.

“In general, Turkey, Iran and UN officials have expressed their interest in the report and willingness to continue to work with the Jordanian side,” he added.

The technical meeting came only two weeks after the sides reached an agreement to create a trilateral mechanism aimed at monitoring the ceasefire regime established in late December. The parties to the negotiations included the Syrian government, 13 Syrian opposition groups and guarantor states – Russia, Iran and Turkey – as well as UN Special Envoy on Syria Staffan de Mistura. U.S. Ambassador to Kazakhstan George Krol also participated in the meeting as an observer.

The talks resulted in the adoption of a three-party declaration establishing, among other decisions, a mechanism of controlling the ceasefire regime observance. The meeting was presented as another step towards the resumption of peace talks in Geneva under UN auspices.

Earlier, Staffan de Mistura announced the postponement of the next round of the Geneva talks to “give a chance for this Astana initiative to actually implement itself.” The negotiations, expected to take place Feb. 8, have now been re-scheduled for Feb. 20.

According to experts, a step forward in the Syrian settlement process was made in the capital. For the first time since the beginning of the conflict, representatives of the Syrian government and the armed, rather than political, opposition met in the same room. The talks were not held directly, but with the help of intermediaries, which is considered a big step towards the settlement.

Kazakhstan was able to bring together representatives of the Syrian government and the armed opposition. Kazakhstan once again had a chance to act as a host country that creates favourable conditions for constructive work and dialogue on pressing issues. The nation hosted a similar series of meetings in Almaty on Iran’s nuclear programme in February and April 2013, which contributed to unblocking the negotiations and promptly led to a settlement of the issue in 2015.