ASTANA – Head of the Department of the Organisation for Security and Cooperation in Europe (OSCE) Economic and Environmental Activities Andrei Muntean recently pledged during his meeting with Rector of the Academy of Law Enforcement under the General Prosecutor’s Office Ulan Baizhanov to help the academy create a regional law enforcement hub. 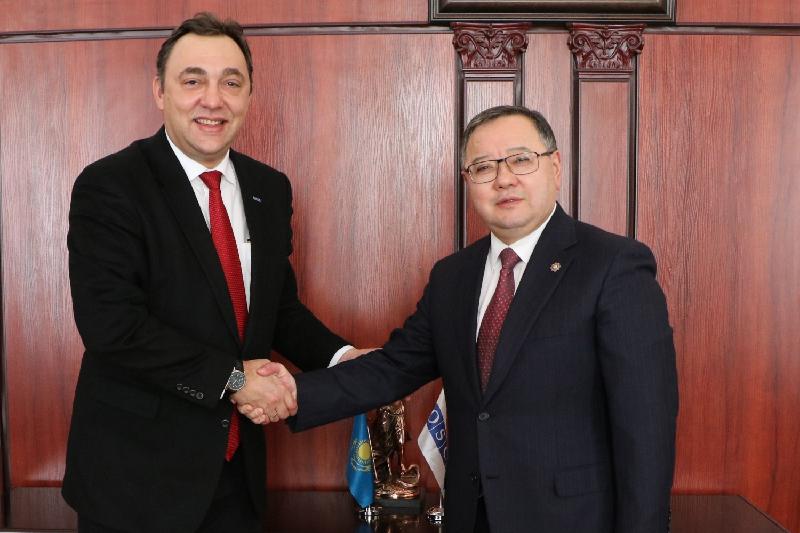 The Kazakh head of state set the task to create a law enforcement hub that would meet society’s expectations and would have personnel trained according to the highest international standards, Baizhanov said. To do this, the country needs leaders of the new formation: educated, trustworthy and with high morals.

The academy is implementing a system of special trainings. Last year, it trained 45 people for the prosecutor’s office, internal affairs, economic and anti-corruption investigation services, while nine of the graduates have been appointed to senior positions.

Baizhanov briefed Muntean about the completion of several intermediate stages of work on the creation of the hub and next steps towards its completion, suggesting qualitatively new approaches to strengthening the ties between the hub and the academy.

“In the near future, the academy plans to sign a memorandum with the UN Office on Drugs and Crime to establish a hub and proceed directly to the training of specialists for the Central Asian states in the region,” said the rector of the academy.

The OSCE’s support for the academy is affirmation of the academy’s commitment to fundamental OSCE security principles. Baizhanov thanked Muntean for supporting academy, General Prosecutor’s press service reported in a press release.

Muntean praised the level of cooperation received from Kazakhstan and highlighted the academy’s contribution to the effective use of scientific and educational spheres as a tool to solve national and regional issues.

Baizhanov noted the OSCE has helped strengthen international security over the last four decades and contributed to Kazakhstan’s development by helping the country respond to modern challenges.