By Aigerim Seisembayeva in International on 17 February 2017 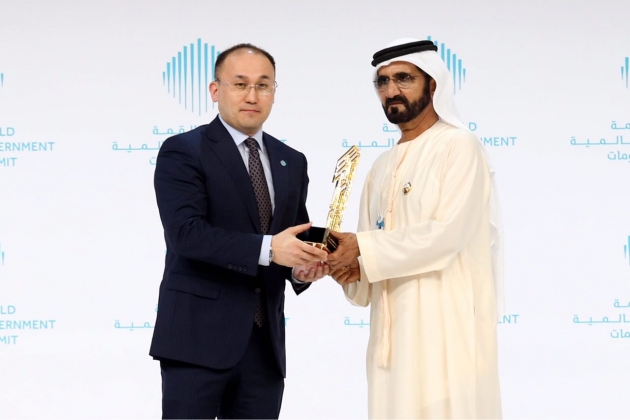 The Android, iOS and Windows phone app was launched in late 2014 and offers86 e-services, including a “Mobile Personal Cabinet” where a citizen can view his/her personal data from national databases. It also offers a map of government services, such as notaries and kindergartens, and allows users to make suggestions to improve public services. The app had more than 1.6 million users at the end of 2016.

The World GovTechioneers competition was launched in December 2016 to encourage global government entities to enhance their services, implement smart government initiatives and develop partnerships to identify innovative solutions to challenges facing the world. The contest received thousands of nominations since its launch.

The winners of the World GovTechioneers Race, selected by an impartial judging panel, were awarded on the third day of the WGS, Feb. 14.

Kazakh Minister of Information and Communications Dauren Abayev, who headed the country’s delegation to the summit, accepted the award presented by Sheikh Mohammed bin Rashid Al Maktoum, Vice President and Prime Minister of the United Arab Emirates and Emir of Dubai.

“This is a deserved award for our team of highly skilled professionals, who put a lot of effort into this project. It’s also an incentive to develop the industry,” Abayev said.

Also at the summit, Abayev discussed Kazakhstan’s experience in the field of digitilisation and the “Digital Kazakhstan” programme with the Minister of Economy of the UAE Sultan bin Saeed Al Mansouri. The sides also discussed the hub Astana plans to create within the Smart City project and agreed to cooperate in the technology sector to develop digital transformation.

Issues like the end of globalisation, how technology is breaking borders, treating extremism and the source of nuclear energy were key topics discussed during the summit. Participants of the three-day event shared best practices in government agencies’ work and talked about their vision of the future government.

The WGS included participation of seven world and international organisations who are also strategic partners of the summit, including the International Monetary Fund, the United Nations, UNESCO, Organisation for Economic Cooperation and Development (OECD) and the World Economic Forum.